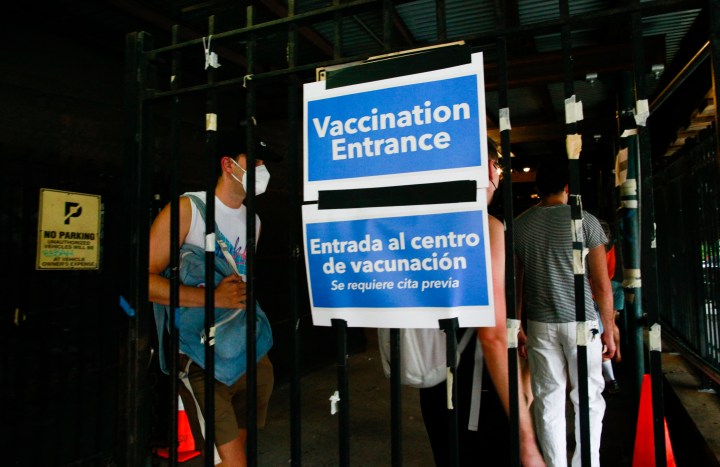 COPY
People wait in line to recieve the Monkeypox vaccine before the opening of a new mass vaccination site at the Bushwick Education Campus in Brooklyn on July 17, 2022, in New York City. KENA BETANCUR/AFP via Getty Images

People wait in line to recieve the Monkeypox vaccine before the opening of a new mass vaccination site at the Bushwick Education Campus in Brooklyn on July 17, 2022, in New York City. KENA BETANCUR/AFP via Getty Images
Listen Now

The World Health Organization is reconvening a panel of experts Thursday to determine whether the monkeypox outbreak is a public health emergency of international concern.

In the U.S., confirmed cases are spreading across the country, although experts say those figures are likely an undercount.

Demand for monkeypox vaccines are surpassing available supply. The U.S. has ordered millions of shots, but it will take a while for many of those doses to reach people.

Meanwhile, people are suffering from the virus. Marketplace spoke with Jon in New York, whose last name is being withheld for privacy reasons. Despite his efforts to get vaccinated against the virus, he ultimately got monkeypox. “I was incredibly frustrated. Because, you know, I got a disease that I was actively trying to prevent getting through a vaccine but could not get access to in time,” he said.

In a world that has been facing the COVID pandemic for years, we wanted to know why it’s been so challenging to respond to this outbreak. Marketplace’s Sabri Ben-Achour spoke with Anne Rimoin, a professor of Epidemiology at the UCLA Fielding School of Public Health. The following is an edited transcript of their conversation.

Sabri Ben-Achour: Confirmed cases of monkeypox are rising across the country, and this is a known virus. Did we learn absolutely nothing from COVID?

Anne Rimoin: Well, I think we did learn quite a bit from COVID. But it doesn’t mean that we’ve actually taken those lessons to heart and used them in this case. The key here is we still have not invested in our public health infrastructure to be able to absorb events like this. And we will constantly be chasing behind emerging diseases, outbreaks, epidemics, pandemics, if we do not invest in the critical infrastructure, which allows us to respond.

Ben-Achour: In a lot of places, if you want to get tested, you’ll go to urgent care. They’ll take photos of your symptoms, of your sores. They’ll send those photos to Department of Health. The Department of Health will then decide whether or not you should be tested, because they don’t have enough tests for everybody. Then they’ll pick up the test. Then they’ll do the test. Then they’ll get you your results, weeks, maybe after you started to get better. I don’t understand how that is helpful to anyone.

Rimoin: Well, exactly. But in order to be able to mount a response, you have to have the testing widely available. And again, this speaks to the issue of not having planned for something like this. We’ve seen cases increasing in places where we know the virus is endemic in animals, this should have been a warning sign. Of course, the way to get in front of that is to deal with it at its source. And that is something that should have been done for a long time. But you know, there just hasn’t been a lot of funding for monkeypox research or for countries to be able to really follow their outbreaks and to be able to give good estimations of cases.

Ben-Achour: Based on what you know and what you’ve seen from the response. I mean, where do you see this going?

Rimoin: So I think that the stakes are very high here. In terms of are we going to be able to get it out of the human populations where it’s circulating now, I don’t know. I certainly hope that we can control it, but we are losing daylight. I think that the testing and the vaccines are going to be absolutely critical in getting our arms around this problem. That’s the short term answer. The long term answer is the investment in public health infrastructure.