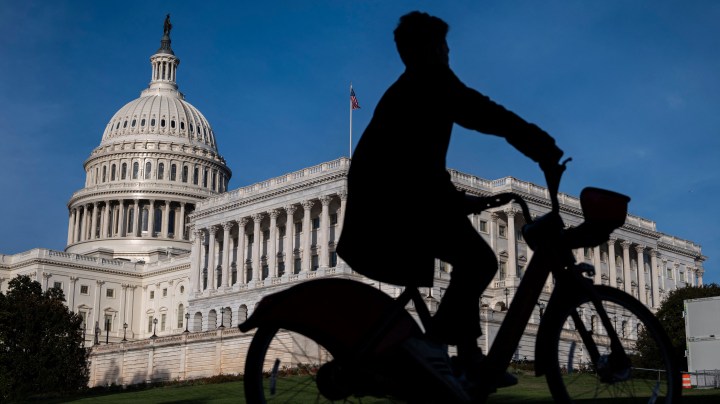 COPY
President Biden's $1 trillion plan invests in long-term infrastructure change, although state and local officials will have plenty of say in how the money is spent. Andrew Caballero-Reynolds via Getty Images

President Biden's $1 trillion plan invests in long-term infrastructure change, although state and local officials will have plenty of say in how the money is spent. Andrew Caballero-Reynolds via Getty Images
Listen Now

President Joe Biden finally has his $1 trillion infrastructure package. Once it’s signed and done, the next part is shoveling that money out the door and into the things for which it was intended.

As you might expect, there’s a lot going on in a $1 trillion pot of money. Let’s start with $110 billion for highways and bridges and more than $100 billion for public transit and rail. “At least on … the public transportation side of things, I think we’re in pretty good shape to move out pretty quickly here,” said Dean Franks with the American Road & Transportation Builders Association.

Every state has a backlog of roads and bridges they want to fix or have been meaning to get around to fixing. Amtrak knows what it’s behind on.

“We should start to see real-world impacts starting this fiscal year,” Franks said.

But then there is the more complicated, newer stuff: networks of electric car charging stations, creating electric bus fleets for cities, taking down highways that ripped up communities.

“That could take years, if not decades, to fully realize the true impact,” said Joseph Kane, a fellow at the Brookings Institution.

The buzzword under Barack Obama’s stimulus program was “shovel ready,” and the emphasis was on getting the money out fast to plug holes in a cratering economy.

“The economic moment we are in is different,” said Shoshana Lew, director of Colorado’s Department of Transportation, who was the Transportation Department’s chief financial officer at the end of the Obama administration. “The bill is more about the future and how we sort of think about what we want our infrastructure to look like moving forward.”

But a lot can go wrong between the president’s pen hitting paper and the rubber hitting the road.

“There’s a misunderstanding that the federal government, in all of its power, can wave a wand and that projects can start appearing all over the place,” said Robert Puentes, president of the Eno Center for Transportation. “But that’s just not how it works. So much is done outside of Washington.”

State and local governments are responsible for three-quarters of transportation and water spending — so, at the end of the day, they will have a lot of say on how, how quickly and how well a lot of this money gets spent.

Correction (Nov. 9, 2021): A previous version of this article misstated Shoshana Lew’s title. The text has been updated.