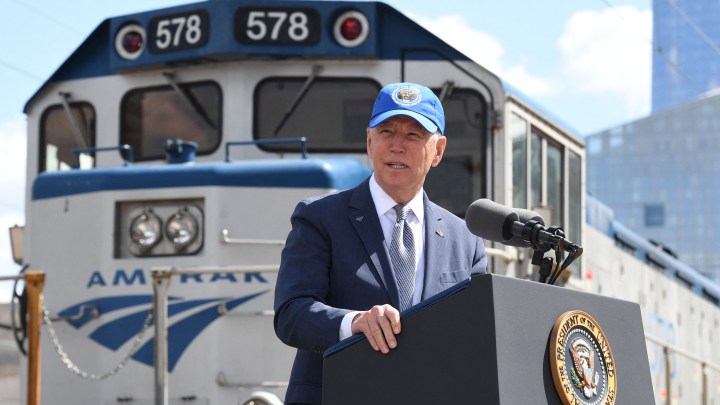 COPY
Amtrak, a favorite mode of transportation for President Joe Biden, will see a massive bump in funding thanks to the infrastructure bill. Olivier Douliery/AFP via Getty Images

Amtrak, a favorite mode of transportation for President Joe Biden, will see a massive bump in funding thanks to the infrastructure bill. Olivier Douliery/AFP via Getty Images
Listen Now

Yesterday, the U.S. Senate passed the roughly $1 trillion package to help fix the nation’s roads and pipes and public transit. The bill now awaits more drama in the House.

Rail enthusiasts are generally elated by the fresh $66 billion for passenger and freight rail, the biggest investment the federal government has made in railroads since Amtrak was founded in 1971. But a good chunk of that money might go to just one 10 mile stretch of track: The Gateway Project, connecting New Jersey and New York City.

More than 200,000 passengers rode the rails between New Jersey and Penn Station every day before COVID hit, through a tunnel damaged by Hurricane Sandy.

“I think most people within the passenger rail industry would form the consensus opinion that the Gateway is the most important rail project currently ongoing,” said Sean Jeans-Gail, vice president of policy and public affairs for the Rail Passengers Association.

The problem is the price: up to $30 billion, depending on whether features like a new wing for Penn Station will be included in the total.

Not all of that tab is on the infrastructure bill. But overall, states like New York, New Jersey and others in the northeast corridor will likely gobble up a big chunk of those new rail dollars.

While improving the most congested rail network in the country is obviously important, Jeans-Gail said the infrastructure package does not realize President Joe Biden’s original dream for a national, state-of-the-art rail system.

“You cannot have a national program that spends the vast majority of its money in northeastern states,” Jeans-Gail said.

“Often it is three white-collar supervisors doing the job of one,” Levy said.

The infrastructure bill also allocates a fresh $110 billion to roads and bridges. Rail advocates say they’d like some of that funding for rail projects not near the Hudson River.