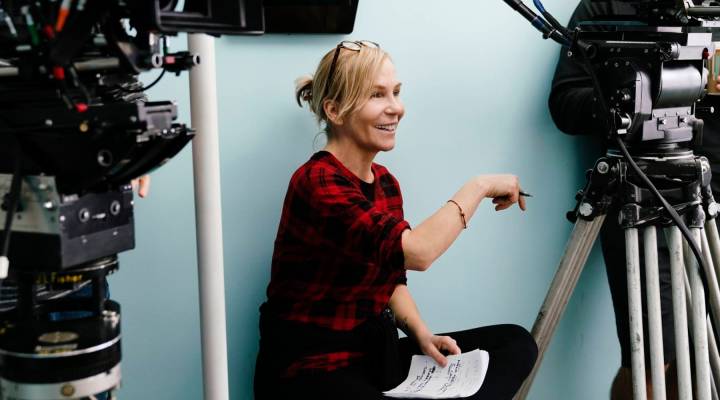 Summer has traditionally been kind of a dead zone on the television calendar. The big networks mostly save their big premiers for fall. But increasingly, and especially this summer, with streaming services and cable networks pumping out more and more content, there’s a lot to watch out there. You might’ve heard about a new show on HBO called “Sharp Objects,” or “Dietland” on AMC, or maybe your summer watch list includes the final season of “Girlfriend’s Guide to Divorce” on Bravo. Three different shows, all created and run by the same woman: Marti Noxon. She talked with Marketplace host Kai Ryssdal about the TV business today and how she draws from her own experiences in her work. The following is an edited transcript of their conversation:

Kai Ryssdal: So you are running three shows on three different networks. So my first question is do you actually have time to be sitting here doing this interview?

Marti Noxon: I mean, that’s what’s interesting is a lot of people think that you do it all yourself. But the truth is, you know, one of the ways that I really believe a show gets great is by letting people do their jobs. By learning to let go of certain things and be like, “You’re great at that. You don’t have to ask me every question, like you can answer your own question. How about that?”

Ryssdal: How hard was it for you to let go?

Noxon: It depends on the show, or maybe it depends on what phase the show is in when. We’re first creating it and sort of setting the template for how it looks and how it feels, I’m very hands on. But there’s a lot of ways to communicate that. For “Dietland,” we created a lookbook, and I created it like a visual map of how different parts of the show should look. And then other people could share that information, like, “This is the color palette here, this is, you know…” So, but yeah, I’m pretty controlling at the beginning.

Ryssdal: I was going to say, I was with you until you got the color palette.

Noxon: No, I mean it’s very intentional. It’s very intentional. Every part of it. I mean, because television is so much more like film now. Yeah. You know, the level of quality that you want to try to achieve and the visual quality, unless you’re just communicating like a crazy person, it can drift.

Ryssdal: You know, you mentioned television and film, and I didn’t want to ask the “peak TV” question, because everybody asks that. Every TV person I get in here, I ask that question, and then it inevitably gets cut in the edit. I’m not going to ask it, but I’m going to ask a version of it, which is TV now is — this is not my original idea — it’s the American art form now. The American visual art form.

Noxon: Yeah, I mean, I made a film called “To the Bone,” which, you know, we took to Netflix and it was the first thing I’ve directed in a long time, and it’s a movie, you know. But the major player that stepped forward was Netflix, and it was so interesting because everybody else sort of dropped away because they knew they couldn’t match that deal. You know, Netflix put $8 million on the table for a film that cost around 3. And by the way, at that point, I don’t have a choice, like, I’ve, you know, I’ve given the choice of where it goes over to the producers who found the money. So they just sort of said, “We’re going with Netflix,” even though part of me was like, “But I want it to be a movie. You know, I want it to be a movie in theaters.” It is weird that the business model is just changing it, so even if you very intentionally make a film, it’s going to end up being on TV.

Ryssdal: All right. So we’re getting far afield from my notes and the stuff I want to talk to you about, but I think this is really interesting because, I mean, do you look now at the dollar figures being thrown around, content dollar figures, Netflix and HBO and Amazon, and do you just go, “Holy cow, this is amazing”?

Noxon: Well, you know, I think I’ve come to a much broader understanding of the business. And the truth is, when you think about like, let’s look at the finances for something like “Sharp Objects,” which, you know, was was a movie budget but they got eight hours of content. The more I started to understand that, the more I started realizing a lot of this money that they end up paying to the writers or the actors is insignificant to them based on the content that plays internationally for years and years and years.

Ryssdal: So let me let me pull back out of that rabbit hole then and get to some stuff on the list, which is the content of the stuff that is on your shows, specifically “Dietland” and “Sharp Objects.” It’s not autobiographical, right? But there’s a lot of you in here. You draw on you in the themes and the emotional impact of a lot of what’s in here. Is that easy? Why? First of all, why?

Noxon: Why? You know, let’s get my shrink on the phone. Guess what, I’m working on a film right now, a story about a woman who, you know, she lost her son in a “stand your ground” shooting. And people keep asking me, like, “That’s not funny. Like, why do you keep going to these stories?” But the truth is, the way that I can connect with people emotionally is to dig into something really personal and try to reveal something about my own life experience or fears or concerns that other people will suddenly feel less alone. The people who found “Dietland,” I get these text messages that are like, “This is life, like, this is keeping me feeling like I’m not alone.”

Click on the audio player above to hear the full version of the interview.