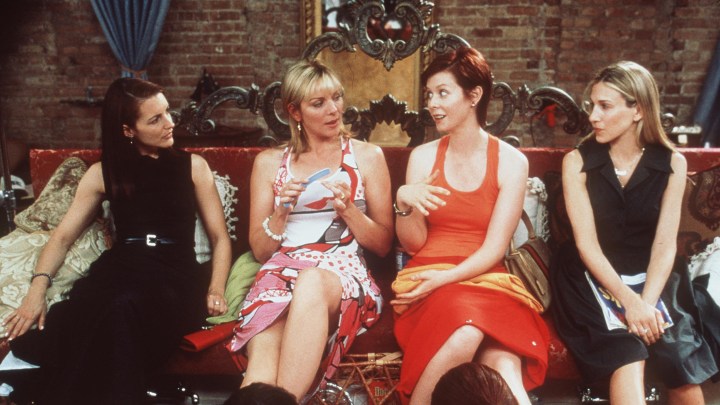 COPY
The original cast of "Sex and the City." The reboot of the hit show won't include the character Samantha, played by Kim Cattrall, second from left. Paramount Pictures

The original cast of "Sex and the City." The reboot of the hit show won't include the character Samantha, played by Kim Cattrall, second from left. Paramount Pictures
Listen Now

A “Sex and the City” reboot is coming to HBO Max. It’s one of many revivals in the works at major networks, “Gossip Girl” and “Dexter” among them. A lot of reboots don’t live up to viewers’ expectations. So why do networks take the risk?

Part of the reason is numbers. “Sex and the City” already has a fan base, or at the very least some cultural cache.

“Everybody has heard of it, everybody understands it and everybody, whether they were fans or not, has seen some portion of it,” said Robert Thompson, who teaches television and pop culture at Syracuse University. “That is a rich and rare commodity. You’ve already got an entire history of promotion, advertising and brand identity that is already bought and paid for.”

That’s a big plus, but it’s also part of the danger in revivals. The new “Sex and the City” won’t include Kim Cattrall, who played Samantha, one of the original main characters. And the team will probably have different writers and directors.

“There’s a certain magic to how shows work,” said Joe Pichirallo, who has produced TV and film at networks, including HBO. “The challenge is how do we capture that magic in a bottle again and get it to work again?”

Capturing the magic doesn’t mean copying the original. “Sex and the City,” for example, premiered more than 20 years ago. The world has changed —and the show’s characters have to as well.

“So it’s a juggling act. You have to convince people it’s worth coming back after all this time and getting reconnected with the show,” Pichirallo said.

The payoff for reboots is also in getting viewers, new and old, to reconnect with the original show. Those plays are crucial for streaming platforms.

“Because places like Netflix and HBO are having to come up with such a huge amount of content to keep their subscribers feeling like there’s fresh food on the table, I think they’re looking everywhere,” said Paul Schneider, who chairs the department of film and television at Boston University.

It means the “Sex and the City” reboot can be a success for HBO Max — even if it isn’t one for fans.