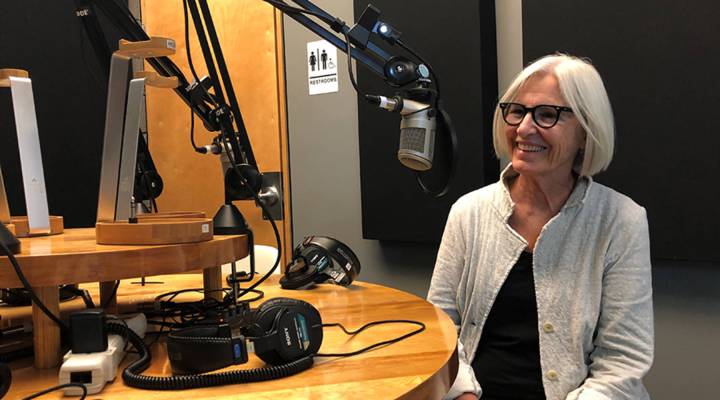 COPY
"I'm more of a listener. I lead very loosely, kind of from the side. I try to give people freedom as much as possible," says Eileen Fisher.  Michael Lipkin/Marketplace
Charting the future: Marketplace at Aspen Ideas 2018

"I'm more of a listener. I lead very loosely, kind of from the side. I try to give people freedom as much as possible," says Eileen Fisher.  Michael Lipkin/Marketplace
Listen Now

Top executives, policymakers and artists gather at the Aspen Ideas Festival every year to share their expertise with the public. This year, the focus is on globalization, free speech and how we’re adapting to an increasingly technical world. Marketplace is at Aspen focusing on what those experts are saying about the future. What’s next for the Trump administration’s antitrust efforts? Or the potential for a world without credit cards? Here’s the second conversation in our series.

Men who run startups get the vast majority of venture capital money, but could the odds of a startup’s success be better if it’s run by a woman?

Venture capitalists invested more than $58 billion in startups last year, yet women only got 2 percent of that money.

We decided to get some perspective on this issue from Eileen Fisher — designer, founder and chair of the board of the eponymous women’s clothing brand. She joined us to talk about how women approach leadership roles differently than men and her push to create more sustainable clothing. Below is an edited transcript of their conversation.

David Brancaccio: You were on a panel here at Aspen the other day with the “Shark Tank” guy. Kevin O’Leary, right? He’s not just a celeb on TV — he is an investor and he’s interested in startup companies. He thinks he does better when he gives money to startups run by women, better than the men.

Fisher: I love it.

Brancaccio: Does that make sense to you? You were sitting on that panel.

Fisher: Absolutely. Well, I think it sort of confirmed, from a totally different angle, my personal instinct and from my personal experience. What he said is that women seem to be a little less aggressive in their targets and they look more long term at things and so they kind of grow more slowly.

Brancaccio: So when a real sociologist comes in and does a peer reviewed study into this notion of gender and startups, it wouldn’t surprise you if the data bears out this observation?

Fisher: Yes. And I think there’s more to it than the way he was framing it, personally, because I actually think that women do things a little differently. Not because we’re different or better, but because we’ve been socialized differently. For example, I think we are more listeners — I’m more of a listener. I lead very loosely, kind of from the side. I try to give people freedom as much as possible.

Brancaccio: So does the buck stop anywhere at Eileen Fisher?

Fisher: In some ways it stops with me, of course, as the chair of the board now. But we have a leadership team with six people, and they sort of head different areas. They come together weekly and spend hours together and make decisions together — so the buck stops with them.

Brancaccio: What you call it, Eileen Fisher, is deeply democratic decision making?

Fisher: Deep democracy. Yeah, the idea is you sit in the room and maybe someone makes a presentation about an idea or a project or a decision that needs to be made, and the group puts their thumb up if they’re in agreement, thumb down if they’re not, and sideways if they’re not sure. And so then you have a discussion and the people who aren’t sure, or are negative, are asked, “What would you need to come on board with this?” The idea is that then people, if they have some disagreement, they don’t walk out of the room and say, “Why did we make that decision?” and then split off in some way — but that they’re part, energetically, of the flow forward.

Brancaccio: All right, different topic. I’m going to start with an awkward statistic, but it’s crucial to ask someone in your position. Using the Environmental Protection Agency’s calculation, 85 percent of used clothes, donated or not these clothes, end up in the dump, in the landfill. How big a problem do you think that is?

Fisher: Oh, I think it’s a massive problem. And we are working to mitigate that problem, at least in our own world.

Brancaccio: I mean it’s a bummer — not that you’re not trying to fix it — but it’s a bummer that when I try to donate my used clothes, I think something noble is happening to them.

Fisher: They might just end up in the landfill.

Brancaccio: Yeah, and that’s not always the case. But you’d like something better to happen to used Eileen Fisher clothes?

Fisher: Yes. So we have this take back program, it’s called Renew. So we take the clothes back from our customers, and we’ve been doing that for eight years. We’ve already taken over a million garments back.

Brancaccio: All right, well, I get that in the case of — well, in the unlikely event I wore Eileen Fisher — but say a loved one loves Eileen Fisher and has some that doesn’t fit anymore, or just doesn’t work anymore, but is otherwise perfectly OK. They could bring it back?

Fisher: Yeah. Absolutely. They get $5. Seems like not so much, but the point is: bring it back.

Brancaccio: And what do you do with it?

Fisher: And what we do is we clean things and re-sell them. We have two stores, we sell in some of our other stores. But we then, when, what happens is there’s some of them that have stains and spots and they can’t be cleaned and just refurbished. So after all these years, we have warehouses and mountains full of these clothes. So we set up something called “Tiny Factory” and have been making things and bringing in designers to create new clothing and different kinds of pieces. We’ve actually discovered this felting machine and now we’re making home furnishings and art pieces.

Brancaccio: So let’s go through this. If it’s a perfectly intact garment, there’s a place for that. What if it’s just faded and the color isn’t working anymore. Could you do anything with that?

Fisher: Well, we over-dye. So we have one piece of the recycling program where they send to a company that over-dyes things. So they just start new, fresh colors — maybe fashion colors — and all of a sudden you have what feels like a new piece.

Brancaccio: And then she just snagged the shawl on the seat belt of the car and there’s a hole in it. There’s nothing you could do with something with a hole in it.

Fisher: Well, some things can be repaired, definitely. And we have taught people how to mend sweaters — there’s a way to do it. And we also do some fun, creative mending, like maybe use a different color thread or some special, fun stitches, or things like that.

Brancaccio: Then if a thing really can’t be repurposed as its original garment, it’s just done. You still could do something with it?

Fisher: Well, then what we do is cut them up and make them into new garments. We make pants into tops and different color-block things, and then we also do things that are felted. So lots of things going into this felting machine that blends the fabrics together and it’s so beautiful. It’s amazing. It’s like making art out of trash.

Brancaccio: Eileen Fisher, the company, is a B Corp. So that’s still for-profit, but not just for profit.

Fisher: Right, basically the concept of B corp is that you measure not just your profits each year, but you measure your environmental and social impacts. So you have to track all these things, you have to meet certain standards in order to be a B corp. Right now we know that business is a huge polluter. The fashion industry is a huge polluter. But business in general doesn’t have to pay for the use of the air and the water that they pollute. I think it’s a commitment. It also groups you together with like-minded businesses that are trying to also sort of be a force for good in the world. So that’s good, but actually, what we’re finding is again, like with women’s businesses, it’s successful. It works. And people want to support business that they feel good about, that they know that are trying hard to do things differently.

Brancaccio: It’s been said, Eileen, that a great way to predict if someone would wear Eileen Fisher is to ask if they donate to public radio. Is that an urban myth, or is there any truth to that?

Fisher: I think that sounds great. (laughs) I donate to public radio.

Fisher: We do find that our women support different charities. We do lots of giving back to different things, women’s organizations and things like that, and that does seem to be one of the things that comes up in our psychographics of who our customers are. They’re givers.