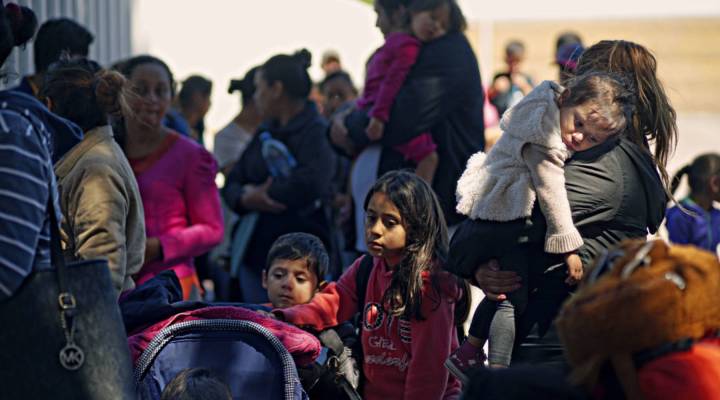 COPY
Undocumented migrants wait for asylum hearings outside of the port of entry in Tijuana, Mexico on Monday. Sandy Huffaker/Getty Images

Undocumented migrants wait for asylum hearings outside of the port of entry in Tijuana, Mexico on Monday. Sandy Huffaker/Getty Images
Listen Now

Who’s getting paid to carry out the Trump administration’s policy of separating children?

In March, the Trump administration ordered prosecutors to charge people illegally crossing the border and separate children traveling with their parents. Marketplace’s Andy Uhler looked at the money that flows into the facilities housing these children, starting with a firm called Southwest Key. Below is an edited transcript.

David Brancaccio: Tell me more about this company. How did this nonprofit grow to be such a key player in this industry?

Andy Uhler: So Southwest Key started as a local nonprofit here in Brownsville that housed basically less than 50 boys who had entered the country illegally, but were not yet 18.

It’s now a huge nonprofit whose budget last year was almost half a billion dollars. Now a lot of that money comes through contracts with the federal government. But you’re right, it’s a bit anomalous because the other companies in the private prison space, and that’s what we’re talking about when you talk immigrant detention centers for the most part are for-profit companies. Now I spoke with Alex Friedmann at the Human Rights Defense Center who dug into exactly how these companies make money. And I asked him whether being a nonprofit, like Southwest Key, actually matters.

“It’s all from the same bucket, which is taxpayer money. So all the money that you and I and listeners all pay to the federal government in our taxes, it all just goes into a big bucket and then it’s paid out to various contractors that the federal government contracts with, whether they’re for-profit or nonprofit,” Friedmann said.

Now, as a nonprofit, Southwest Key doesn’t have to pay federal income tax, but what Friedmann told me is that these other for-profit groups have declared themselves real estate companies and established real estate investment trusts, or REITs, to house their money because those are also exempt from many federal income taxes.

Brancaccio: But this is clearly a growth opportunity for the nonprofit Southwest Key as the Trump administration pushes the family separation policy.

Uhler: You’re right, and there’s already talk of a new facility dedicated to very young children that would operate in Houston. But Houston’s Mayor, Sylvester Turner, has already met with Southwest Key and he’s asked them to reconsider their plans to open that facility there.

Brancaccio: And you contacted Southwest Key. What did they say?

Uhler: I got an email from Southwest Key and I’ll just read you what they wrote me: “Southwest Key Programs does not operate detention centers so we do not have detainees in our programs. We are a fully licensed child care program and each of our shelters is regulated by a childcare licensing authority and as well as the Office of Refugee Resettlement and other state and local agencies.”

Brancaccio: All right, but I just looked at the dictionary. To detain — keep someone in official custody — is one of the definitions.

Uhler: You’re right, and we should be clear that Southwest Key’s job, as a contractor with the United States government is to take care of unaccompanied minor undocumented immigrants and children who have been separated from parents who allegedly entered the country illegally.

-Over 60 percent of people are held in privately run immigrant prisons.

-The median age of someone deported by the U.S. Immigration and Customs Enforcement is 30 years old, while most people in immigration detention are between 26 and 35 years old.

-Mexico is the country with the highest number of people who get detained, followed by El Salvador, Honduras and Guatemala.