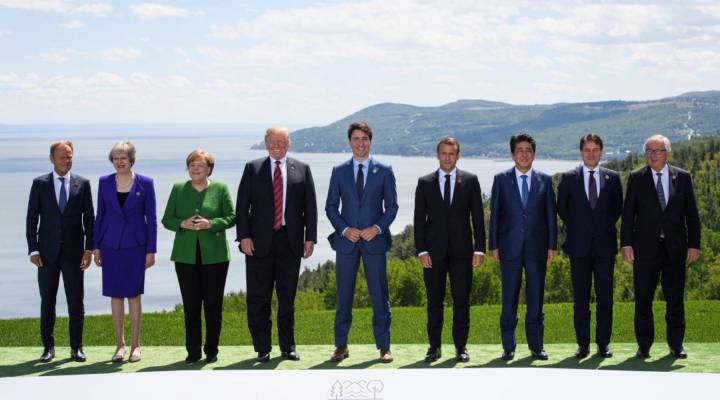 Trudeau’s remarks at the conference prompted Trump to lash out against him on Twitter.

Based on Justin’s false statements at his news conference, and the fact that Canada is charging massive Tariffs to our U.S. farmers, workers and companies, I have instructed our U.S. Reps not to endorse the Communique as we look at Tariffs on automobiles flooding the U.S. Market!

Ian Bremmer, founder of the political risk consultancy the Eurasia Group, said this is the moment U.S., Europe and Canada fell out, despite the economic repercussions. He joined us to discuss how the G-7 summit affected the trans-Atlantic relationship and what to look for as Trump sits down with North Korean President Kim Jong-un in a historic meeting.

With all these heated headlines, heated rhetoric and bruised feelings, is the trans-Atlantic relationship now different than it was on Friday before all this happened?

It is. The relationship, the bromance between Macron and Trump is decidedly over. The likelihood of additional tariffs from the United States against Canada has gone up. Russia has inserted itself more clearly back into the relationship, and is going to drive more of a wedge between the Americans and certain partners after what Trump has said about Russia. And the willingness of America’s closest allies to trust the United States and the American president is really at an all-time low since World War II.

And this feels different this time. It’s not that the shared economic goals of Europe and the U.S. will actually guide this. That now it’s starting to become a dysfunctional relationship.

The G-7 summit this weekend was the geopolitical equivalent of Trump firing Comey. It wasn’t in his interests, but my God, it felt really good at the moment that he did it. It was petulant. It was Trump wanting to lash out at the American allies because he was hurt and he was angry and he felt like they didn’t like him and they weren’t doing what he demanded. And as a consequence, he did a lot of damage to those relationships that have taken decades to build up. But they’re a lot easier to hurt and a lot of ways that Trump would like to get his own foreign policy outcomes more towards his liking over time are going to be harder. Because these are people — these are relationships you have to cultivate and he’s actively spited them.

But Canadian Prime Minister Trudeau — is he being a jerk?

No, he wasn’t at all. But he was being pretty tough minded about being considered a national security threat and about the trade relationship with the United States, that he would hit back on tariffs. Trump has said that the reason you need America first is because all these other countries automatically are going to do the same thing for themselves. So he should’ve in principle expected it from another leader, but as soon as he got on that plane, he needs to get the last word and it was not OK for him to leave early and for others to be setting the agenda.

Tonight, you’re going to be watching the headlines pouring from Singapore as the North Koreans and the Americans get together. What are you going to be looking for? What’s a guide to parsing this?

Well, I mean, since Trump has said in the first moment he’s going to know whether this is serious or not, or to look at body language immediately, and I suspect it’s going to be very warm. Trump very much wants this meeting to go well. It is historic for him. The G-7 is historic for him in very different ways, but not ways he necessarily likes. This is the first American president to ever meet with a North Korean dictator. And Trump wants to show that he can do what no one else can. If it ends in acrimony and bitterness, that’s going to take away what Trump personally sees as his most significant accomplishment since he’s become president — foreign policy so far. But let’s be clear: this is not the most important summit. The North Koreans have now met with the Chinese twice, the South Koreans twice. The Chinese have much more influence over North Korea, so I think those meetings matter more. And if you want to talk about the American meeting that’ll matter the most to the media, it’ll be when Trump sits down and does a summit one-on-one with Putin probably coming in the next few months.