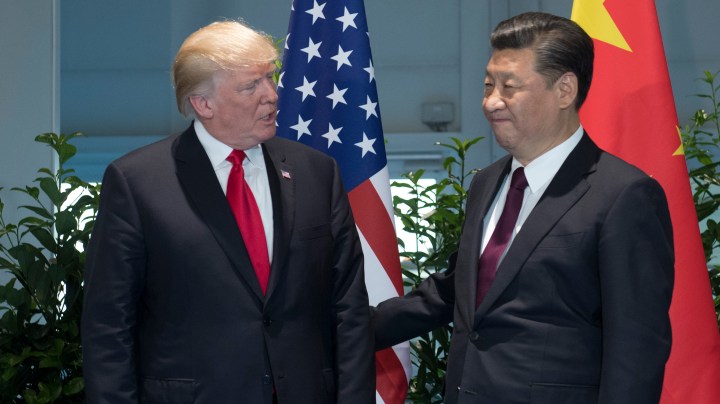 There is cautious optimism in China as President Donald Trump and his Chinese counterpart, Xi Jinping, get ready to meet on the sidelines of the G-20 summit of leading rich and developing nations that starts Friday in Osaka, Japan.

“Since the [U.S.-China] trade talks stopped in May, the smell of gunpowder from both sides is strong,” said Xiong Peng, senior researcher at Pangoal Institution, a Beijing think tank. “So it’s a big step forward that [the two sides] agreed to meet.”

It is the first face-to-face meeting between the two leaders since the last G-20 summit in Argentina in December 2018.

At that time, presidents Trump and Xi agreed over a meal of steaks and caramel pancakes to put a pause on new tariffs.

“The two sides agreed to open their markets, and [China will] gradually address the reasonable concerns from the U.S. side about furthering China’s [economic reforms],” state-run CCTV reported last December.

The network added that China would expand its imports of American goods to address the trade imbalance between the two countries — a big concern of Trump’s.

“After the Argentina meeting, there were constant leaks to the media on what were the sticking points in the trade talks, including tariffs, China’s blocked internet and enforcing intellectual property protection,” Xiong said. “And they were making progress step by step.”

A deal looked possible by April.

But in early May, Trump sent out a pair of tweets that threatened to raise tariffs again because the talks were moving “too slowly.”

Chinese leaders made some miscalculations in April, according to Xiong.

“Of course, the [economic growth] was fueled by [the government] increasing credit and allowing more bank loans,” Xiong said. “But [the higher economic growth made] Chinese leaders [more] confident.”

At the same time, he said, China’s officials underestimated the strength of the U.S. economy and thought there were signs of trouble.

Trump’s pressure on the Federal Reserve to cut interest rates may have played a role.

“China revised some terms it had promised before in hopes that Trump would agree,” he said. “It was a test move.”

Instead of agreeing, Trump raised tariffs from 10% to 25% on $200 billion worth of Chinese goods. He also threatened to place tariffs on products from China that had not been taxed so far.

China retaliated by announcing its own “unreliable entities list,” which targets foreign companies, organizations and people.

Chinese officials are also investigating FedEx after the company apologized for mishandling some Huawei packages.

It is impossible to sever ties between the world’s two largest economies, according to Jing Ulrich, J.P. Morgan Chase’s vice chairman of Asia Pacific.

“The U.S. and China, despite their differences, have a very important symbiotic relationship,” Ulrich told an audience at the Mobile World Congress in Shanghai on Wednesday.

China is America’s largest foreign creditor: It owns more than a trillion dollars of U.S. Treasuries, or 5% of government debt.

“That basically helps keep U.S. interest rates low,” Ulrich said. “Therefore, U.S. consumers can afford to buy homes [and] use consumer credit to buy goods from China. This model has worked for many years.”

She expects cooler heads will prevail this time around.

“The two countries are very much reliant on each other, like a married couple,” she said.

Xiong of the Pangoal Institution believes the two leaders may reach an agreement when they meet.

“But reaching an agreement, strictly speaking, would only mean things will not get worse in the short term,” he said. “The [U.S.-China] confrontation over trade and other issues will last for a long time.”