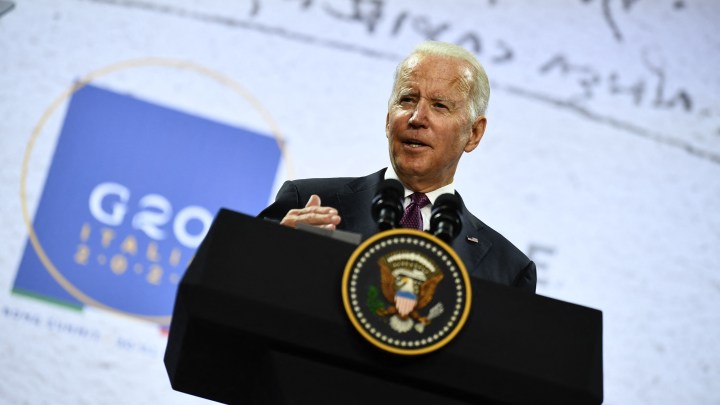 COPY
President Joe Biden at the G-20 summit in Rome, where the U.S. announced it would roll back tariffs imposed on imported EU steel and aluminum. Brendan Smialowski/AFP via Getty Images

President Joe Biden at the G-20 summit in Rome, where the U.S. announced it would roll back tariffs imposed on imported EU steel and aluminum. Brendan Smialowski/AFP via Getty Images
Listen Now

At the G-20 summit of leading rich and developing nations in Rome over the weekend, the U.S. agreed to roll back tariffs former President Donald Trump imposed on steel and aluminum imported from the European Union. And the EU agreed to lift retaliatory tariffs on some American imports, from bourbon to Harley-Davidson motorcycles, which were set to double later this year.

The U.S. and the EU also agreed to work together over the next couple of years to limit imports of so-called dirty steel — from countries like China — where steel production is creating a whole lot of carbon dioxide and contributing to climate change.

Making steel from iron spews a whole lot of carbon dioxide into the atmosphere. In the traditional method, a furnace is heated to 4,000 or 5,000 degrees.

“Just the act of doing that requires a tremendous amount of power,” said Jennifer Hillman at the Council on Foreign Relations.

The cheapest way to generate all that power, Hillman said, is by burning coal.

“Steel also requires, at the beginning, taking carbon and intensifying it and then heating that up and then blasting oxygen into it,” she said. “That is also a very carbon-intensive product.”

Steel manufacturers in the U.S. and EU are working on decarbonizing that whole process, in part by using cleaner-burning fuels, like hydrogen or natural gas. But that’s hard — and expensive.

That’s why the industry is hoping that this agreement between the U.S. and EU will eventually lead to some kind of border tax on “dirty steel,” said Kevin Dempsey with the American Iron and Steel Institute.

“If we don’t account for that at the border, it’s going to be cheaper for people to import the dirtier but cheaper steel from China,” Dempsey said.

Steel from China isn’t just cheaper because it’s mostly made using coal; it’s also cheaper because the Chinese government subsidizes steel production, and Chinese companies often export and sell a lot of steel at a loss.

So the U.S. and EU joining forces to move toward restricting imports of carbon-intensive steel is also a part of the trade war.

“I think, for Biden, it is much more about pushing back on China. Because that’s been one of the themes of his administration,” said Bill Reinsch with the Center for Strategic and International Studies. “Although in fairness, climate mitigation has been one of his themes, too.”

And this, Reinsch added, is one convenient place where the two priorities come together.