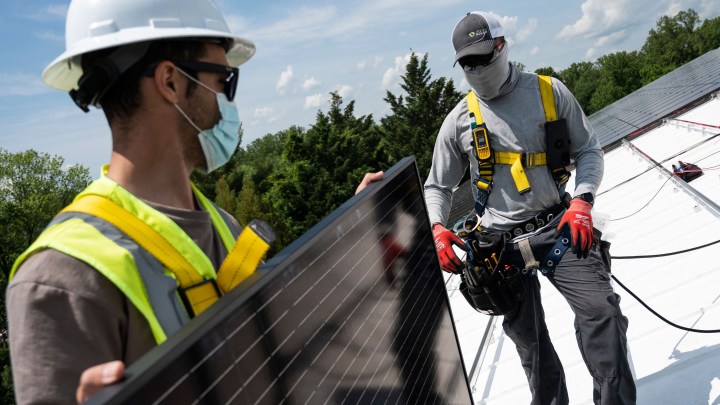 COPY
Solar-panel production in the U.S. has tripled since Trump-era tariffs were imposed, but imports still make up 85% of sales. Andrew Caballero-Reynolds/AFP via Getty Images

Solar-panel production in the U.S. has tripled since Trump-era tariffs were imposed, but imports still make up 85% of sales. Andrew Caballero-Reynolds/AFP via Getty Images
Listen Now

With the United Nations’ COP26 climate conference underway in Glasgow, Scotland, Marketplace has boosted its coverage of the climate crisis and the energy industry this week. Solar power is key to a low-carbon future, and the Joe Biden administration has said it wants solar to expand from 4% of the nation’s current electricity mix to 40% by 2035.

That’s a big jump. At a hearing this week, solar industry representatives told the U.S. International Trade Commission that it won’t happen if Biden keeps the tariffs on solar panels and cells made abroad that then-President Donald Trump imposed in 2018. These tariffs were supposed to protect U.S. solar manufacturing.

When you’re talking about tariffs on solar supplies, there are two different objectives: “Is the goal here to increase manufacturing jobs in the United States? Or is the goal here to deploy as much renewable energy as one can and therefore, hopefully, to mitigate climate change?” said Jeffrey Ball, who teaches energy policy and finance at Stanford University.

So if the goal is to increase manufacturing jobs in the U.S, have the tariffs worked?

“A bit, but not anywhere near as much as the proponents of tariffs long have argued they wanted them to,” Ball said.

Since the tariffs were imposed, solar-panel production in the U.S. has tripled, but imports still make up 85% of sales.

Some domestic manufacturers say they need more time — and even stricter tariffs — to compete.

“How do I possibly make a sale when my competition is offering a module that’s been brought into this country, and the price of that module is lower than my bill of materials?” said Mamun Rashid, CEO of Auxin Solar, based in San Jose, California.

Given that, there’s the other question: How does the U.S. deploy as much solar as possible?

Which is what these tariffs are. What’s more, without imports, Ross Hopper said, it’ll be impossible for the solar industry to make its full contribution to Biden’s energy-transition goals. 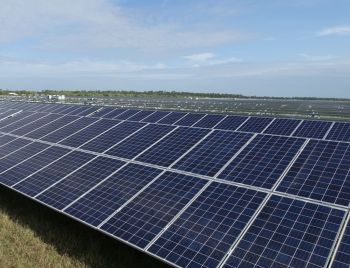