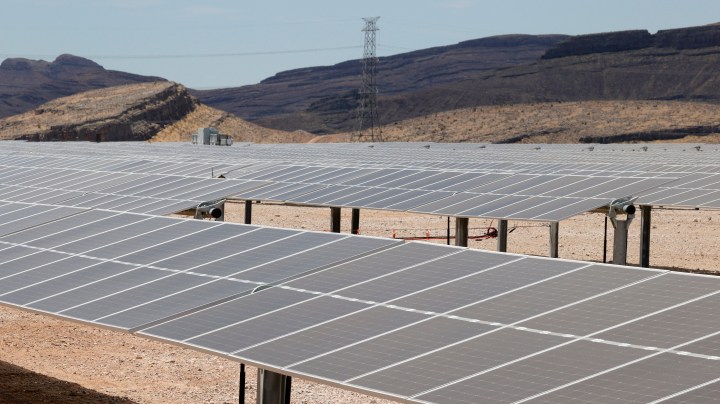 COPY
The trade war between the U.S. and China is causing solar projects to get delayed or canceled.  Ethan Miller/Getty Images
A Warmer World

The trade war between the U.S. and China is causing solar projects to get delayed or canceled.  Ethan Miller/Getty Images
Listen Now

April 22 is Earth Day. Crude oil is over $100 a barrel, nobody wants to pay Vladimir Putin for gas anymore, and three-quarters of Americans now think that climate change is at least partially caused by humans. Great time for the solar energy business, right?

“This has been an incredibly frustrating couple of months in the solar industry,” said Abigail Hopper, head of the Solar Energy Industries Association.

The Commerce Department is looking into whether solar panels imported from Southeast Asia have ties to Beijing, and therefore need retroactive tariffs.

“Panels that you’ve purchased and are even maybe shipping to the United States as we speak, you now don’t know what they’re going to cost when they get here,” Hopper said.

The U.S.-China trade war is causing solar projects to get delayed or canceled, she said.

Wind power is also vulnerable to global supply chain problems, according to Greg Wetstone, president and CEO of the American Council on Renewable Energy.

“A wind turbine is a really complex apparatus with thousands and thousands of parts. Some of those parts are not manufactured here,” he said.

Those parts could be stuck in Chinese ports locked down because of COVID-19 (right next to the furniture you ordered back in February).

A more persistent issue is a lack of infrastructure connecting wind farms to transmission lines, Wetstone said. “The financing is ready, the siting is ready. It’s all put together, and we can’t get that power on the grid.”

“One iron and steel company in Poland is working with U.S. small modular reactor developers to bring their technology to help decarbonize their supply,” Kotek said.

Of course, those images of a Ukrainian nuclear power plant on fire probably won’t make Americans feel more comfortable with the idea.