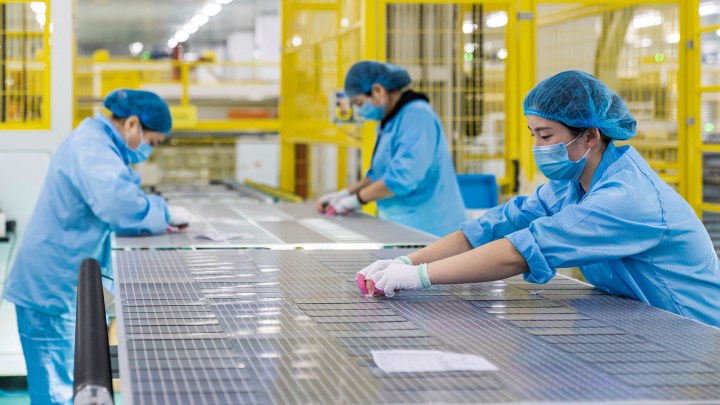 Few parts of the U.S. have escaped worries about domestic energy capacity and climbing costs. On Monday, President Joe Biden made a big announcement about solar energy supply.

He expressed concern about the limited availability of solar cells and associated parts, so the White House presented a list of things it will do to get solar supplies back to where it wants them to be — and at the same time, boost domestic solar manufacturers.

Between 75% and 80% of the solar panels used in the U.S. are imported from Cambodia, Malaysia, Thailand and Vietnam. The Commerce Department began investigating those countries in March to see if they were essentially laundering Chinese solar panels, on which the U.S. has placed tariffs over unfair trade practices.

“It really sent basically a freeze throughout the entire solar industry,” said Abigail Ross Hopper, president of the Solar Energy Industries Association. The fear was that the investigation would result in tariffs on the equipment.

“Companies didn’t know whether they would get solar modules, what cost those modules would be, whether modules they already imported to the U.S. would be hit retroactively with a tariff,” Ross Hopper said.

That’s why, on Monday, the president restored certainty. He said there would be no solar tariffs on these countries for two years. He also promised support for U.S. solar manufacturers, using government contracts to promote demand and invoking the Defense Production Act to unlock funding. But there’s a long road ahead.

“So as an example,” said Joseph Majkut with the Center for Strategic and International Studies, “solar developers planned to install 15 gigawatts of solar capacity last year in the U.S. Total U.S. solar manufacturing is somewhere around 2 gigawatts.”

Reshoring the kind of manufacturing currently found in Southeast Asia would be a heavy lift, said Jordan Schneider with the Rhodium Group. “‘Cause by and large, it is a volume-driven industry, where cheap energy is a really important input.”

But the U.S. could have an advantage in its more cutting-edge solar technology, and growing U.S. demand helps domestic manufacturing, according to Lachlan Carey with the Rocky Mountain Institute.

“We can expect to see solar manufacturers find competitive reasons to locate their manufacturing facilities closer to that deployment,” he said.

One big asterisk: Despite all the incentives the Biden administration has announced, many of its proposals are still languishing in Congress.