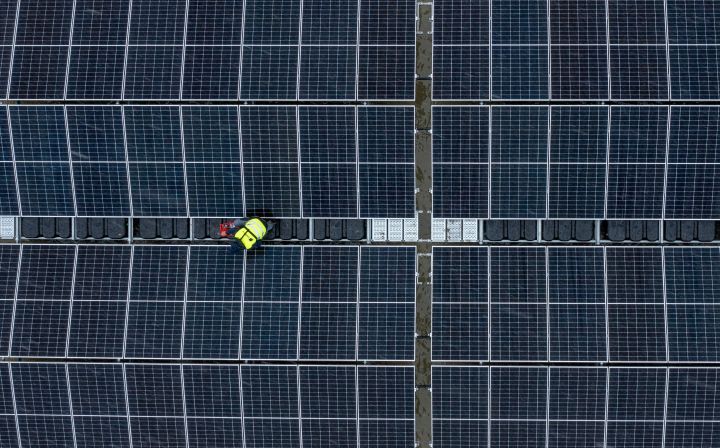 COPY
An inquiry into the origin of solar panels from Southeast Asia could slow down several U.S. projects. One core facet of the dispute: taxation. INA FASSBENDER/AFP via Getty Images

An inquiry into the origin of solar panels from Southeast Asia could slow down several U.S. projects. One core facet of the dispute: taxation. INA FASSBENDER/AFP via Getty Images
Listen Now

Even with energy prices surging, skies are not so sunny for the U.S. solar industry. The Department of Commerce is investigating whether solar panels imported from Southeast Asia are really coming from China, and therefore should be subject to tariffs. Solar trade groups say it’s causing projects to get postponed.

The Department of Commerce launched the investigation in April because of a complaint from Auxin Solar, a California solar panel manufacturer.

“The case is existential for us. Cheap panels coming from Southeast Asia just doesn’t allow us to compete,” said Mamun Rashid, CEO of Auxin Solar.

If that’s the case, those panels should be hit with a tax that dates to the Obama administration.

Trade groups representing some of the solar markets’ major players said the allegation is baseless. But just the prospect of retroactive tariffs on imported solar panels is creating unprecedented uncertainty.

“It makes it impossible for investors to step up and finance new solar projects, for developers to build those projects. And the supply of solar components is rapidly dried up,” said Greg Wetstone, who heads the American Council on Renewable Energy.

The retroactive duties could end up adding up to 250% to the price of each solar panel, though that estimate is on the higher side.

Wetstone said the U.S. should be bulking up domestic solar manufacturing, especially in light of supply chain issues laid bare by the pandemic.

“But the way to do it isn’t to blow up the existing economy,” he said.

Mary Lovely at the Peterson Institute for International Economics said the investigation has highlighted an uncomfortable tradeoff.

“I think we have seen there is a tension between the Biden administration’s environmental goals and it’s goals with regard to moving supply chains out of China,” she said.

The Department of Commerce will announce its preliminary findings by Aug. 30.