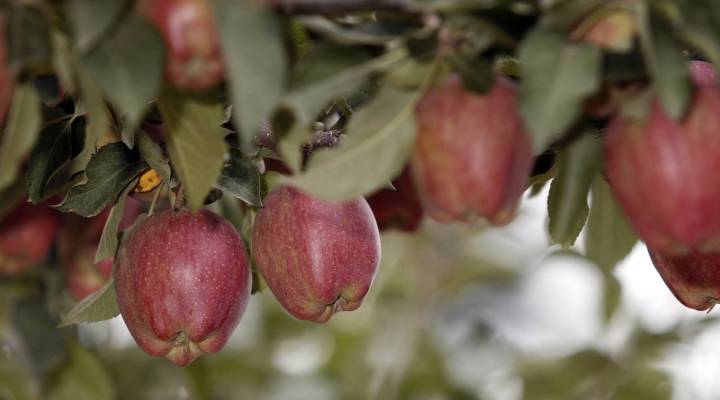 On May 31, President Donald Trump announced that the 25 percent steel and 10 percent aluminum tariffs that had been temporarily exempt for the EU, Canada and Mexico would go into effect in June. Mexico answered with some counter-tariffs, including one on U.S. apples. If you’re an apple grower in Washington state, like Patrick Smith, whose family runs Loftus Ranches in the Yakima Valley, this is really bad news. Marketplace host Kai Ryssdal talked with Smith about what he’s expecting. The following is an edited transcript of the conversation.

Kai Ryssdal: So we talked last time about a bunch of things: a little bit of NAFTA, a little bit of China … now news of these Mexican tariffs on American apples. How’s your state of mind?

Ryssdal: So given that it’s No. 1, and given that you can’t — as you mentioned last time — you can’t get apple trees to make less apples, what are you going to do?

Smith: Yeah, that’s kind of the big question right now. You know, we’ve got a pretty big crop coming up this fall and so, you know, a lot of that crop is already set. The trees are growing the apples right now and we’re not really sure exactly how this is going to play out and how badly shipments will be affected, but we could see growers not harvesting some of their lower-producing or lower-quality blocks. You know, just leaving the fruit on the trees. We could see a lot of fruit backed up into the market and then having to try to find different ways to, you know, to get rid of that excess supply.

Ryssdal: So is that like apple sauce and apple juice? I mean is that what you do with leftover apples?

Smith: Yeah, so what we can’t move into the fresh market would likely get diverted into some of those lower-value channels like juice, sauce, worst case scenario would be like livestock feed. Or, like we saw a few years back, just dumped into canyons to rot, which is really unfortunate.

Ryssdal: That’s got to kill you.

Smith: Yeah, because it’s high quality fruit. It’s fruit that was grown and harvested and destined for the fresh market, to sit on grocery store shelves. And so we’re keeping our fingers crossed that U.S. and Mexico can work this out before the 2018 crop starts shipping at the end of August.

Ryssdal: End of August,wow. That’s not a whole, terribly lot of time.

Ryssdal: No, we’ve still got about 20 percent of the 2017 crop left to ship. So over the next couple of months we will start to see, once the tariffs actually go into effect, how shipments to Mexico are being impacted. If we see a rapid slowdown in those shipments, that would be an ominous sign for the 2018 crop when it comes in in a couple of months.

Ryssdal: I imagine the Washington State apple, you know, marketing group or whatever your industry group is and the national industry group is jumping up and down on people’s desks in Washington. Are you getting any kind of response from senators, governors, people in proximity of the White House who are saying, “yeah, we hear you and we’re going to make your case?”

Smith: Yeah, we’re getting some feedback from our congressional representation that we need to understand better what the end game for the administration’s trade strategy looks like. And how we can mitigate some of the impacts on our industry. But we do have various trade groups and interest groups barking pretty hard at some people.