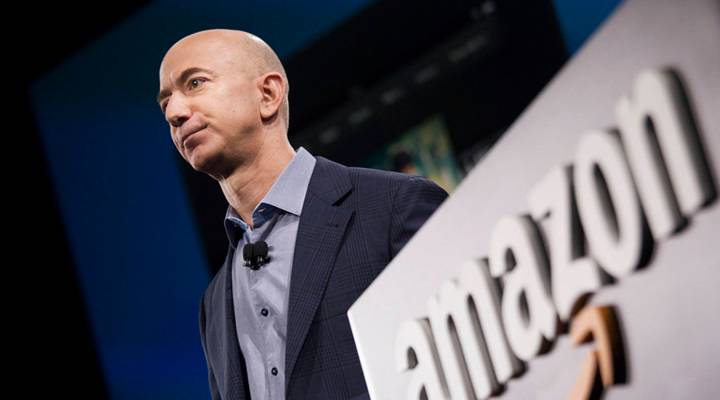 COPY
Later this month, Amazon shareholders will vote on a proposal recommending the company implement the Rooney Rule for finding new members of its board of directors. Above, Amazon founder and CEO Jeff Bezos. David Ryder/Getty Images
Marketplace Tech Blogs

Later this month, Amazon shareholders will vote on a proposal recommending the company implement the Rooney Rule for finding new members of its board of directors. Above, Amazon founder and CEO Jeff Bezos. David Ryder/Getty Images
Listen Now

Update (4:45 p.m. EDT):  Today, Amazon’s board adopted a new policy regarding board member nominations.  The new policy requires, according to a spokesperson, that “the Nominating and Corporate Governance Committee include a slate of diverse candidates, including women and minorities, for all director openings. This policy formalizes a practice already in place.”  You can read the full text of the policy here.

Companies are under pressure to improve diversity at the executive level and the board level. Many have a tendency to say that they can’t find enough good, diverse candidates, to blame the pipeline, essentially.

Some companies are turning to remedies like the Rooney Rule, an NFL policy that requires at least one minority candidate be interviewed for certain management positions.

Later this month, Amazon shareholders will vote on a proposal recommending the company implement the Rooney Rule for finding new members of its board of directors.

However, the company’s current board says shareholders should vote against that proposal. The board (which currently includes seven men and three women, all of whom are white) says it has a complex process in place for nominating new members and argues that, while it’s committed to diversity, using the Rooney Rule “would not be an effective and prudent use of the company’s time and resources.”

After the news came out, there was internal debate at Amazon about how the board should vet candidates.

Marketplace Tech host Molly Wood talks about the process of creating a diverse company with Nicole Kyner, the head of search for theBoardlist, which is a curated marketplace that aims to put more women on boards. The following is an edited transcript of their conversation.

Molly Wood: Do you think that Amazon’s response, that the board’s response to this suggestion of implementing the Rooney Rule is fair? Like, is it fair to say that is a little too simplistic?

Nicole Kyner: I think it is fair. The Rooney — it’s a one-trick pony, and I think the situation calls for something a great deal more nuanced. But I also think it’s incumbent on Amazon to make a clear statement of what their actions are going to be. At no point do they actually say, “Yes, we’re going to ensure, we’re going to demand, a diverse slate of candidates as we move forward and consider new board members.”

Wood: Can we pro/con the Rooney Rule a little bit? What are the benefits to making sure you’ve got some people in the room to at least interview?

Kyner: It’s a great idea, and I believe it’s having a positive effect in the NFL. What we want to make sure is that there are diverse slates. But I think quotas are an uncomfortable thing for most boards. And that while it’s a tool, it’s really not the solution. The solution is going to come from the top creating the demand, creating the desire to see a slate of candidates, of excellent candidates, and let’s make sure that we include all types of diversity. Until they demand see talent, not just have lip service about it, they’re not going to see it.

Wood: So then, what would be your ideal process if a board is going to get serious about finding diverse candidates?

Kyner:  It’s not reinventing the wheel. The top leadership has to really get it, and the time is such that I think getting it is easier than it used to be. There’s a lot of awareness around this now. They have to demand to see slates that include diversity, because if you don’t make sure that every slate is diverse, then you’re not going to get to diverse outcomes. You simply won’t. If you have a slate of eight white men, you’re going to get a white man on your board. And while the numbers are much better for public companies, where 22 percent of the board seats have women in them, for private companies we’re really coming up behind on that. So those private companies and public companies need to demand diversity in their slates so they can meet diverse candidates. That’s the first thing, for sure.

Wood: And then, what is the business argument for having a more diverse board? How does that benefit a company?

Kyner: The business argument — there are a number of different entities that support it, including McKinsey in their 2015 study that said that when you have more than two women, you increase profits. So it seems it would be sort of a no brainer. If that’s really the case, then why wouldn’t more companies embrace diversity? So that you can understand your customers better and get better market results.