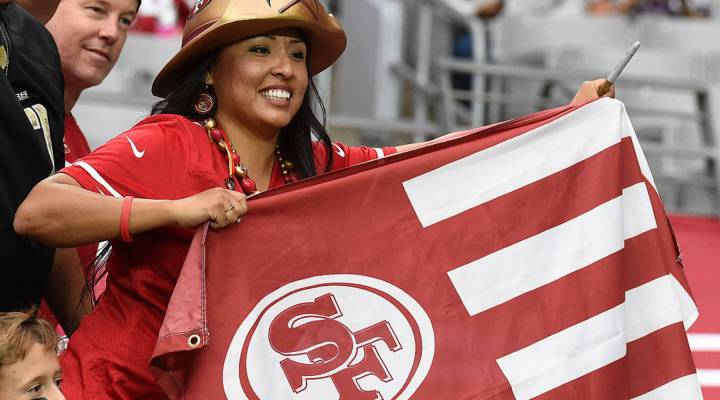 COPY
A San Francisco 49ers fan cheers for her team prior to the start of a game against the Arizona Cardinals at University of Phoenix Stadium on September 27, 2015 in Glendale, Arizona.  Norm Hall/Getty Images

A San Francisco 49ers fan cheers for her team prior to the start of a game against the Arizona Cardinals at University of Phoenix Stadium on September 27, 2015 in Glendale, Arizona.  Norm Hall/Getty Images
Listen Now

Unless you’re a white male, jobs in the NFL — jobs that don’t require helmets, that is — have probably been a little tough to come by, though that is something the league has been trying to change. Since 2003, the Rooney Rule has required teams to interview minority candidates for head coaching and other senior level jobs. In February, the league said it would apply a similar rule for women, mandating that teams include women in interviews for all executive positions.

This week, the San Francisco 49ers announced the team would go beyond the league’s requirement and extend it to all full-time business operations positions.

“It’s important that we create an environment where everyone is welcome, whether they’re male, female, black, white, gay, straight, and that’s really the goal of this, to ensure that we have a truly inclusive workplace, because what leads from that is a workplace where people can be creative, people can challenge each other, which makes us a more competitive environment, which allows us to win both on and off the field,” said Hannah Gordon, general counsel for the team.

Gordon cited studies that show companies with women on their boards tend to be more profitable. She said the push for inclusive hiring would make the company better able to compete for untapped business talent.

“What we’re looking to do on the business side is really no different than what we do in the draft. You’re looking to find the absolute best talent, and in order to do that, you have to make sure that you’re removing your own unconscious biases,” Gordon said. “That’s why our scouts make sure that they’re checking out every small school, that they leave no rock unturned. And that’s really what we’re trying to do as well.”

San Francisco is the first team to pledge to abide by the newly expanded Rooney Rule. Michael Colangelo, associate director of the USC Sports Business Institute said other teams are likely to follow suit.

“You want the best of the best, and you’re starting to see a lot of sports teams search outside the world of sports to find this talent, whether that means tech people, whether that means people who have worked in the private equity industry or the investment banking industry, and some of those people just happen to be female,” Colangelo said.

He said the push by the NFL toward greater hiring of women is a natural progression from successfully marketing of football to all genders.

“They’re growing their female fan base, and when you do something like that, and people become fans of the sports industry, it’s a natural progression for these people to try to get jobs in something that they love,” Colangelo said.