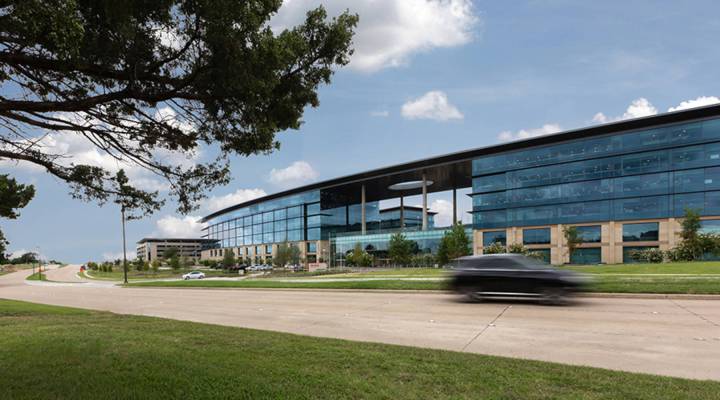 COPY
Toyota was offered more than $50 million in financial incentives and tax abatements from the Texas Enterprise Fund and the city of Plano to move its North American headquarters to Plano, above. Courtesy of Amanda Roark/Toyota

Toyota was offered more than $50 million in financial incentives and tax abatements from the Texas Enterprise Fund and the city of Plano to move its North American headquarters to Plano, above. Courtesy of Amanda Roark/Toyota
Listen Now

Seattle-based Amazon is searching for a location for its planned second headquarters, or HQ2. In recent months, site selection teams have been visiting the 20 metro areas in North America (19 in the U.S., plus Toronto, Canada) that were selected as finalists from a field of 238 cities and regions that submitted proposals in response to Amazon’s callout in late 2017.

Amazon says HQ2 will bring as many as 50,000 well-paying jobs to its new home and generate more than $5 billion in capital investment in buildings and other infrastructure. The company has said it is looking for “a stable and business-friendly environment and tax structure” and that “incentives offered by the state/province and local communities to offset initial capital outlay and ongoing operational costs will be significant factors in the decision-making process.” Bidding entities (which included governments as well as chambers of commerce and economic development organizations) were asked in Amazon’s request for proposals to “Identify incentive programs available for the Project at the state/province and local levels. Outline the type of incentive (i.e. land, site preparation, tax credits/exemptions, relocation grants, workforce grants, utility incentives/grants, permitting, and fee reductions) and the amount.”

Financial incentives included in bids to Amazon have ranged into the billions of dollars from locations such as Newark, New Jersey, and Montgomery County, Maryland. For many cities, however, the proposals (and incentives included in them) have not been made public by the entities that prepared the bids for Amazon.

Two cities in Texas — Austin and Dallas — made Amazon’s final 20 list. The state has a long track record of attracting corporate headquarter relocations and expansions, using an arsenal of state and local financial incentives — including grants and cash payments, tax abatements and other tax breaks — to land marquee companies.

One example is Toyota, which in 2014 was planning to consolidate operations and relocate its North American headquarters from Torrance, California. Chris Nielsen, now Toyota’s executive vice president for product support, said the company wanted thousands of employees to move to the new headquarters, which was a hard sell since the company was coming from a picturesque oceanfront town in Southern California.

“The most important considerations were quality of life for team members and economic factors for the company,” he said.

Toyota chose Plano, Texas, a middle-class suburb of Dallas, population 280,000. Housing in Plano and the North Texas region is affordable compared to many other thriving metro areas around the country, and the local schools are good. To help seal the deal, Toyota was offered more than $50 million in financial incentives and tax abatements — $40 million from the Texas Enterprise Fund, a statewide “deal-closing” fund controlled by the governor, and approximately $14 million in economic development grants and property-tax abatements from Plano.

“Incentives do play an important role” in site selection, Nielsen said. “It’s certainly not the most important factor, but if we were considering multiple sites, and several of them offered some incentives to help with things like infrastructure and the like, and others did not, I think we would look more favorably at those that were looking to invest in us just as we’re making a significant investment in them.”

Toyota has invested $1 billion in its new headquarters, which was completed in 2017 and now has more than 4,000 employees. The sprawling landscaped campus covers nearly 100 acres, with water features, a vehicle test track, coffee bars, fitness centers and a training center that offers virtual reality tours of Toyota assembly plants.

Plano Mayor Harry LaRosiliere said the economic boost from Toyota more than offsets the cost of state and local incentives given to the company.

“It’s going to mean over $7 billion — that’s with a ‘b’ — to our community. So not only obviously sales tax revenue, but travel, retail, hotel. There’s a true multiplier effect from roughly $4 billion of payroll, and that income and purchasing power is pretty significant.”

Because of temporary property tax abatements Toyota receives as part of its incentive package, Plano will raise less tax revenue to fund schools. However, taxpayers statewide pick up some of the education costs in cities that offer such corporate incentives.

Nathan Jensen, a professor of government at the University of Texas-Austin, has concerns about corporate incentive programs.

“I think tax abatements in general are a bad idea, especially long tax abatements beyond five years.” He argues that they starve state and local government of future tax revenues for schools, public safety and infrastructure development.

“Most companies either have a good idea of their location or a small number of locations, and that’s often done at the highest levels of the company.” And he said that when crafting such incentives, government officials should try to support local improvements “that would benefit the community — expanding the airport, workforce training, infrastructure in terms of highways.”

Jensen voiced specific concerns about transparency for the proposals submitted to Amazon on behalf of Austin, Dallas and many other metro areas around the country.

“We know almost nothing,” he said. “Who was at the table? Which land developers were brought in and which weren’t? Were labor groups and environmental groups part of the discussion? In terms of Austin, the Chamber of Commerce submitted the bid, and they’re not subject to public records requests. A number of locations have done this, either through the chamber or an entity created just for the Amazon bid.”

“I really think it’s too big of an entity to come — we’re not ready with the traffic infrastructure, mass transit, our schools,” said Austin City Council member Leslie Pool, adding that she has not seen the proposal sent to Amazon by the chamber to promote the region. Pool said she’s heard from many constituents who are worried that if Amazon brings tens of thousands of new headquarters workers to the area, housing and living costs will rise. She also objects to providing taxpayer money to Amazon, because she thinks the company hurts local retail businesses. “If they want to come here, they can come here, but they need to do it entirely under their own steam,” she said.

But Mike Rollins, president of the Greater Austin Chamber of Commerce, supports extending some financial incentives to Amazon.

“Early indications are that Amazon wants to be a partner in solving community issues,” he said, “whether it’s mobility, affordability, housing.”

Jessica Heer, senior vice president for talent attraction at the Dallas Regional Chamber, said, “We’re open arms, we definitely want them, and we’re ready to accommodate whatever they need.”

Clint Peinhardt studies tax incentives and economic development at the University of Texas-Dallas. He said government or private entities using financial incentives to try to lure corporations should follow some best practices to protect taxpayers.

“Transparency — telling us the packages once they’ve been accepted. Direct targeting of incentives” by tying them to specific measurable job-creation targets. “And claw-backs, so that if a company gets money, and then doesn’t do what they said they were going to do, you can take the money back.”