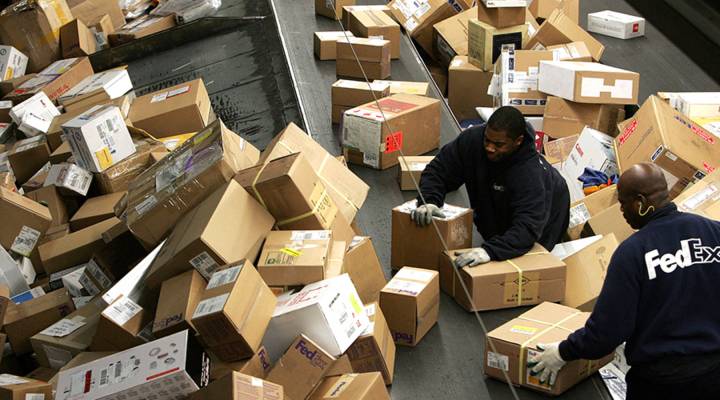 COPY
FedEx worker sort through a pile of boxes at the FedEx sort facility at the Oakland International Airport in December 2006 in California. Justin Sullivan/Getty Images
Marketplace Tech Blogs

FedEx worker sort through a pile of boxes at the FedEx sort facility at the Oakland International Airport in December 2006 in California. Justin Sullivan/Getty Images
Listen Now

Sometime in June, the Supreme Court is expected to decide whether online retailers have to collect state sales taxes. Back in 1992, the court ruled that companies don’t have to collect sales tax if they don’t have a physical presence in a state. But recently, South Dakota passed a law demanding sales tax on online sales. Internet retailers Wayfair and Overstock sued in response — those companies might not benefit because their prices are lower without the tax.

But smaller companies would get a double whammy: their prices would go up, and it would be much harder for them to figure out how to collect those taxes. After all, there are more than 10,000 different jurisdictions for sales tax in the U.S.

And lots of those small businesses and even individuals happen to sell their goods on Etsy. Marketplace Tech host Molly Wood spoke with Josh Silverman, the CEO of Etsy, about how the court battle could affect smaller online retailers. The following is an edited transcript of their conversation.

Josh Silverman: This is a very big deal, not just for Etsy, but for all small entrepreneurs everywhere. I think that we need to make it easier for people to start and run businesses and to innovate and to grow our economy in a world where more jobs are changing to be micro-entrepreneurs. We need to make that life easier for people, not harder. So I think this is a very big deal.

Molly Wood: How does that work right now for Etsy sellers? There’s an online sellers handbook with a section that seems to come from QuickBooks dedicated to sort of helping them sort out these rules. Do you have any sense of how many sellers right now are collecting sales tax or are addressing this?

Silverman: Yeah, that’s a great question. So our sellers are very focused on complying with the law, and they do pay tax. So each of them lives in a state obviously and is subject to the sales tax jurisdiction within that state, and they’re very focused on complying with the tax laws in their state and paying taxes in their tax jurisdiction. And we do provide them with tools to help them to do that.

Wood: One of the first comments actually on that article in the handbook is Mildred Waggoner saying, “All this makes my brain hurt. I just want to sell my artwork and etc. on Etsy.” Again, should sellers suddenly be in a position of having to comply with all these 10,000 different jurisdictional regulations? Is this something that Etsy could just handle? That you could handle for the sellers as part of your platform as a service to them?

Silverman: So the challenge is that one can create software that compiles each of their hundreds of different classifications. Software can do that, but mapping hundreds of product classifications over tens of thousands of jurisdictions to each individual seller’s products is exceptionally difficult, and Etsy doesn’t have the knowledge about the specifics of each product to be able to do that, and it’s an incredible burden for the sellers to do that. So we’ve created a micro business caucus, and we’ve been very active in pushing for tax reform that allows sellers to comply and pay taxes in a way that minimizes their administrative burden.

Wood: Are you advocating for something like a flat tax rate for online goods?

Silverman: Not necessarily a flat tax rate, but we’re advocating for federal simplification and harmonization so that there’s one set of rules that are relatively easy to understand and comply with that would work nationally.

Wood: Yeah, I know that, you know, at the time of the original ruling that if you didn’t have a physical presence, you didn’t have to collect sales tax. There was a sense that Congress then would step in and do something like this. And now there is maybe that sense as well that the Supreme Court will rule on this in June and that hopefully Congress will kind of fix whatever mess is created. Congress doesn’t have a long history of doing that. So how are you preparing for that possibility in the meantime?

Silverman: One step at a time. Right now, we’re really focused on the Supreme Court case, and so we wrote an amicus brief that really lays out why having every seller be subject to over 10,000 tax jurisdictions is simply unmanageable. We’re very focused on advocating that case as best we can.