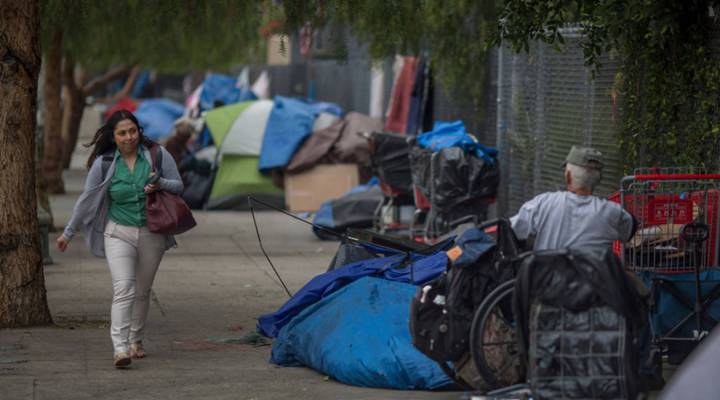 COPY
A woman passes a wheelchair-bound homeless man on Spring Street on May 1, 2017 in Los Angeles, California.  David McNew/Getty Images

For the past year, Albert Gaytan has been camping with 15 others along a quiet backstreet in Echo Park, just down the hillside from million dollar homes. He gets why neighbors complain.

“It has to be cleaned up. It’s intolerable,” Gaytan said, pointing to a knee-deep trash pile at the center of camp others are sorting through. “This is ridiculous, and that’s ridiculous. This is worse than the dump, okay?”

In Los Angeles, Mayor Eric Garcetti says growing street homelessness is the top problem facing the city. LA’s homeless population grew by more than 20 percent last year, and three-fourths of that population lives outdoors. This month, the city declared a “shelter crisis” which combined with additional funding for shelters in the 2018-2019 city budget could add 1,500 temporary shelter beds in the coming months.

Homeless encampments have long been a feature of Downtown’s Skid Row — but now new tent cities are popping up on sidewalks across Los Angeles, spurring complaints from neighbors and a surge in city-sanctioned homeless encampment “sweeps.”

“Today’s our very last day,” Gaytan said. “At 8 o’clock in the morning, they will be here to clear this out, and turn it into a dog park.”

Public works crews will sweep the encampment. In most cases, the homeless will just return the next day, but after a year of trash, heroin use, and late night noise, Gaytan said police threatened campers with arrest if they return.

Last year, LA spent $7 million sending police officers and sanitation workers to clean and clear thousands of encampments. Now it wants to double the effort to meet a backlog of requests from angry residents. But it’s unclear that spending money to sweep away the homeless will do anything to get people like Christina Escalante off the street.

“The residents tell us they don’t like us, we’re lowlifes, we’re drug addicts,” Escalante said, packing her belongings before the next day’s sweep. “I’m not a drug addict, I don’t use. Everyone has a different situation.”

She’s a 50-year-old registered nurse who’s been camping here since she became homeless nine months ago. Escalante has an eviction on her record, which she says makes it harder to rent anywhere.

“Everyday you get up and it’s a struggle to get water and you’ve got no electricity, and you can’t charge your phone,” Escalante said. “It’s really hard.”

Most homeless camps get swept by the city every few months, with one day’s notice. But in some homeless hotspots, these cleanups are more routine.

On a recent Friday morning, like every Friday morning, a 16-vehicle procession of police cars and city works trucks rolls down the Boardwalk in Venice Beach. It wakes up the homeless and clears trash and other belongings before crowds of tourists arrive.

The procession rolls to a stop in front of Dondrell Lee, a homeless artist. He negotiates with police over his neatly stacked canvases and art supplies, all wrapped in a tarp, sitting on the boardwalk.

“You guys have had all day,” said LAPD Officer Michael Putrah. “You’ve seen us coming down here. That doesn’t fit in a 60 gallon, man.”

Officers and sanitation workers confiscate most of artist Dondrell Lee’s belongings during a routine sweep on the Venice Beach Boardwalk.

These city workers are enforcing a law that says homeless people can’t have more than 60 gallons of stuff with them in public.  They won’t make any exceptions for Lee. He has to fit what he can into a plastic bag and hand the rest of his belongings over to the sanitation workers, which they promise to store until he picks them up.

Lee’s been sleeping on this boardwalk for two years, and says he welcomes trash clean up, but he doesn’t see any sanitary or safety benefit to confiscating his art.

“It’s not trash,” Lee said. “People bend rules all the time. You see how the guy was lenient with me and then me and him did it together. The cleanup crew, they didn’t even touch anything.”

“We can’t sweep or move homelessness away,” Garcetti said. “We’re not going to wash down sidewalks one day, only to see an encampment return the next, and people not helped. It doesn’t get any single person off the street with that strategy.”

LA voters approved a billion-dollar bond a couple of years ago to fund 10,000 more permanent housing units for the homeless.  The mayor’s deputy chief of staff, Matt Szabo says the challenge is convincing people to welcome housing for the homeless in their own neighborhoods.

“The homeless are either going to be in encampments on the sidewalk, or in safe permanent housing,” Szabo said. “And that housing needs to go somewhere.”