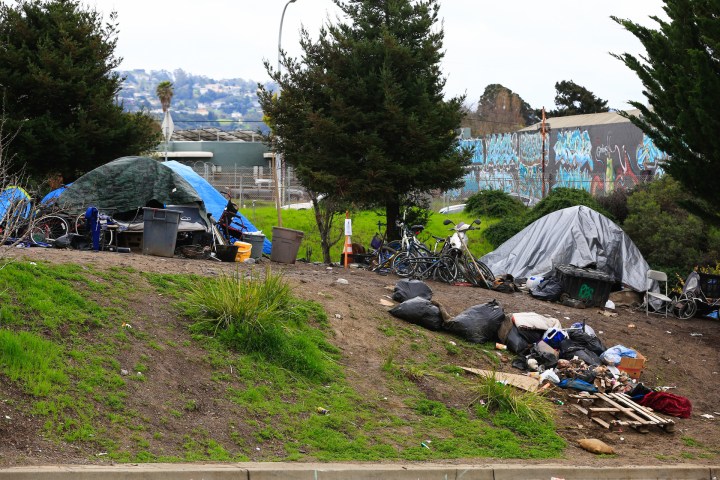 COPY
Health officials and service providers say homeless populations, like the people living at this camp in Richmond, California, are particularly vulnerable to the spread of COVID-19. Sruti Mamidanna/KQED
COVID-19

Health officials and service providers say homeless populations, like the people living at this camp in Richmond, California, are particularly vulnerable to the spread of COVID-19. Sruti Mamidanna/KQED
Listen Now

California public health officials and advocates for the homeless are scrambling to figure out how to shield a potential spread of COVID-19 from reaching some of the state’s most vulnerable populations: people living in shelters, cars or in encampments.

More than half a million people in the U.S. are homeless, meaning they often lack access to basic sanitation, get limited medical care and lack access to running water while sometimes living in close quarters.

“The biggest thing that the CDC or anybody has said is hygiene, hygiene, hygiene,” said Dr. Danielle Williams, a family physician at Roots Community Health Center in East Oakland. “But how can you do that if you don’t have access to water or shower?”

Williams and her team visit camps twice a week in a mobile clinic to treat patients. They’ve been warning encampment residents about the virus, but they note that those residents can’t do much without more washing stations.

The U.S. Department of Housing and Urban Development has released an infectious disease toolkit report, advising local counties on best practices for preventing and managing the spread of disease within encampments.

“Whether encampments are sanctioned or unsanctioned, developing and enforcing sanitation guidelines is essential to prevent disease spread,” the report says.

The city of Berkeley has installed 20 sanitation centers at encampments, Sacramento County has ordered batches of Purell for homeless residents and in San Francisco, Mayor London Breed released $5 million for hygiene at shelters and residential hotels. She said the city will also use RVs to isolate homeless individuals if they test positive for COVID-19.

“We need to be prepared for any situation. And that’s exactly what we’re doing,” said Breed.

Other homelessness advocates are working to get the word out to people living at encampments.

“It’s extremely concerning. That’s why we should be trying to take this seriously,” said Dale Smith, an organizer for the Wood Street encampment, a sprawling camp in West Oakland with about 100 people currently living there.

“It’s potentially going to affect a lot of people around here. Because there’s only one port-a-potty that’s barely used and a hand washing station that doesn’t work either. That’s definitely far from sufficient,” he added.

At another encampment in South Berkeley, Kent Dull said he’s been homeless for five years and worries that his Parkinson’s disease makes him more vulnerable to the virus. “It’s not easy to change your whole lifestyle to wipe up everything you see,” Dull said.

Leslie Degen, another resident at the camp, had also heard about the novel coronavirus. “I just continue to do what I do, which is try to treat my body good and wash my hands and that’s about it,” he said.

In California, most of the state’s 150,000 homeless people are living unsheltered, outside or in structures not meant for human habitation.

“What these emergencies highlight is our basic failure of our system to serve the most vulnerable amongst us,” said Dr. Joshua Bamberger, associate director of the UCSF Benioff Homelessness and Housing Initiative. He highlighted the need to develop an outbreak preparedness plan that accounts for unique issues related to homeless people.

“If we can use these emergencies to improve the long-term health of vulnerable populations, then it can be a wake-up call,” said Bamberger.