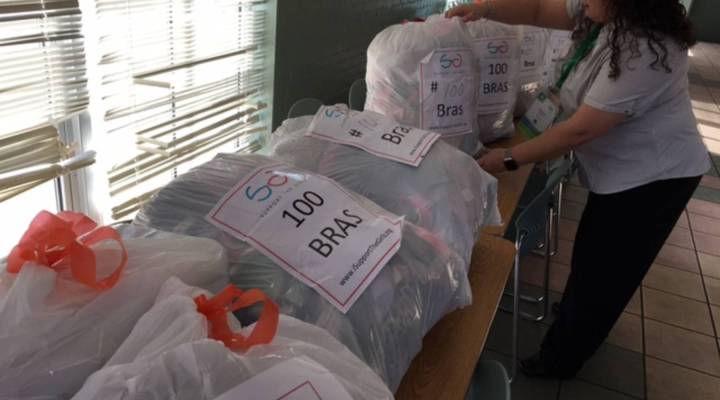 COPY
Grace Whitley, Support the Girls coordinator for the Dallas area, unloads donations of bras and hygiene products at the Center of Hope homeless shelter for women and children. Courtney Collins

Grace Whitley, Support the Girls coordinator for the Dallas area, unloads donations of bras and hygiene products at the Center of Hope homeless shelter for women and children. Courtney Collins
Listen Now

While people regularly give old clothes and outgrown shoes to those in need, homeless shelters and the women who live there often need essentials like bras and feminine hygiene products.

One grassroots group is trying to change that.

Forget coat drives — the Center of Hope shelter in Dallas is getting a pickup truck full of tampons, sanitary napkins and bras.

This grassroots effort, called Support the Girls, started in Maryland. Founder Dana Marlowe was out shopping for new bras and asked her salesperson what she should do with her old ones.

“And she said, ‘Homeless women need bras.’ And I was like ‘Oh, my God, I’ve been living under a rock,’” Marlowe said. “How did I not know this?”

So Marlowe donated her own bras, then put out a plea on social media. From there, things just took off.

Those items are ones rarely donated to homeless shelters. Even at a discount store, a box of off-brand tampons costs about $3. For most women, that will add up to $51 a year. And that’s a lot of money for someone like 27-year-old Annie Moore. She’s been living at the Center of Hope shelter with her four children since September.

“That would be one of the last things, bras and hygiene stuff,” Moore said. “I would be trying to give my kids something to eat or something.” She dreams of her own apartment and going to nursing school. Most of all, she craves independence.

“You wake up, you notice you’re here and it’s hard to take in a lot of the times. But you make it through,” Moore said.

Annie Moore, 27, has lived at the Center of Hope shelter in Dallas with her four young children since September.

“It just builds your self-esteem,” Williams said. “You’re able to say, ‘Hey, I got this.’ What woman wants to walk around like that, uncomfortable?”

When women arrive at the shelter, Williams said, they already have enough to worry about.

“Lost their job, nowhere to stay, they have three to four to five children,” Williams said. “Just broken women.”

Support the Girls said it has made donations to 155 shelters in more than 80 cities.