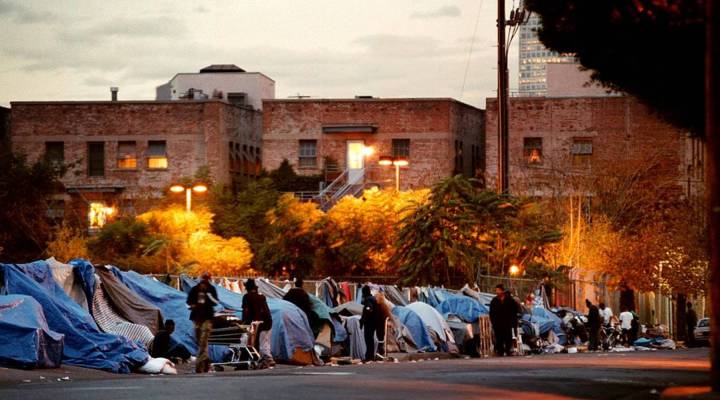 The Los Angeles City Council is meeting Wednesday to discuss a new law that would let the city clear away the increasing number of homeless encampments while providing more storage to people who live on the street.

It’s a balancing act for a city that already had the most homeless people in the country before a sharp increase in tents around freeways and other public areas, the LA Times reported. The last count from the Los Angeles Homeless Services Authority found the homeless population increased by 12 percent over two years. Shanty towns are now a common sight all around the city, not just in Skid Row and other parts of downtown where they were more common. Meanwhile, crime downtown is up.

But advocates for the homeless said stricter enforcement means more people will lose their belongings. The city has come under fire for confiscating people’s stuff, and using tactics that criminalized homelessness. The proposed law tries to balance those concerns by letting homeless people keep what they can store in a 60-gallon bin, or a backpack if the city provides storage within two miles. Officials have also recommended exceptions for bikes, wheelchairs and the like. People would have 90 days to reclaim confiscated items.

When Marketplace’s Jeff Tyler reported on LA’s homeless last year, he visited elaborate shantytowns along the 101 freeway. One man had cobbled together living room on the sidewalk. another complained of new neighbors, saying he worried about new people stealing his belongings.