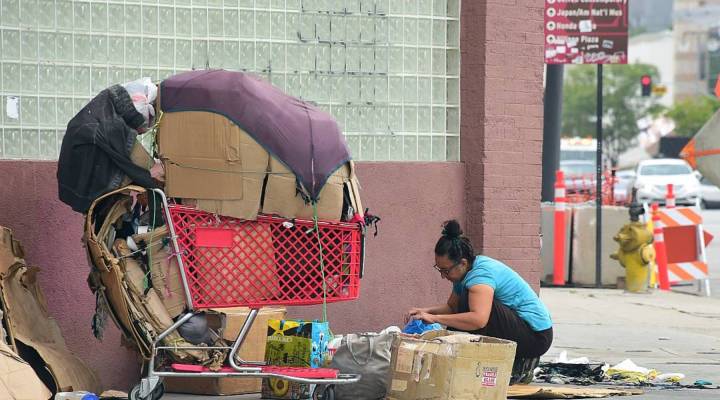 COPY
A homeless woman packs up her belongings after a night sleeping on the street in Los Angeles. FREDERIC J. BROWN/AFP/Getty Images

A homeless woman packs up her belongings after a night sleeping on the street in Los Angeles. FREDERIC J. BROWN/AFP/Getty Images
Listen Now

The latest head count of the homeless population in Los Angeles County found an increase of almost six percent in the last year. Even more troubling is the statistic that relates to women. Since 2013, the number of homeless women in the county is up 55 percent.

But if you walk down the sidewalks crowded with homeless encampments on Skid Row, you’ll mostly see men. The statistics show that there are more than 14,000 homeless women in Los Angeles County. So where are they?

“They don’t want to be seen, because to be seen is potentially to be attacked, to be assaulted, to be harassed,” said Anne Miskey, CEO of the Downtown Women’s Center, which provides services and housing for homeless women.

“About 65 percent of women that we see are victims of domestic violence,” Miskey said. “These are real drivers into homelessness. We know that a lot of women, if they can, will stay in cars and hide themselves away. They won’t stay where there are other men. And a lot of them will avoid shelters.”

That describes 65-year old Francine Andrade. “I never been in a shelter before, because I hear a lot of bad stuff,” she said. “They steal.”

She was homeless for two years after she lost her job. “I used to be a cashier at McDonalds,” she said. “Then they decided that they want to have a big change. They want younger people. So I was laid off. And then I couldn’t pay my rent at all.”

She ended up sleeping outside. She picked a spot in front of a bank because it was well-lighted, which made her feel safer.

“It’s hard to sleep in the street because you don’t know what might happen,” Andrade said. “Some people sleep in the daytime, to stay awake at nighttime. That’s how they survive. And they dress like men.”

Andrade has lived in an apartment at the Downtown Women’s Center for the past six years. The Center has 119 permanent housing units.

Two hundred more women just come for the day – they can get a meal, or take a shower, or collect their mail.

Pamela Walls, 57, first came to the day center to escape the madness of the streets.

“People are getting mad for nothing all around me,” she said. Because that’s what homelessness makes you. It makes you angry and frustrated. And many times you want to take that frustration out on somebody. And you know, people saw me as prey.”

To protect herself at night, Walls would walk around for hours instead of sleeping.

“I felt that, if I had a job I could make everything better,” Walls said. “But that’s not true. I was walking at night, and then going to work at Macy’s. My legs would give without notice. And I had to hold on to tables and anything nearby so I wouldn’t fall, because your body has to sleep sometime.”

As is the case for many homeless people, living on the streets messed with her health in multiple ways.

“I got pneumonia over and over – walking-pneumonia. My immune system is not what it should be because of that. And arthritis – sleeping outside on concrete made that worse.”

The Downtown Women’s Center has a medical clinic staffed by female doctors. Amiyoko Shabazz, 36, is one of the center’s clients who turned her life around.

“I’m getting my mental health back,” she said. “I’m seeing a therapist. I’m on medication. I’m becoming balanced again. I’m sober. I’m feeling like I’m ready to conquer. So now I’m on the other side. I get to be that help. Now I’m in the advocacy program.”

It’s important for Shabazz to give back. Miskey, the center’s CEO, said lots of women volunteer there even while they’re still homeless. It gives them a sense of self-worth.

The center also provides resources for jobs, women can even make crafts that are sold in a café.

But, ultimately, the center has one central objective. “Our whole focus is on permanent housing for these women,” Miskey said.

With increased visibility as a result of the homeless count, she hopes that governments will target funds specifically for women.

As it stands, those looking for affordable housing can be on a wait list for up to two years. 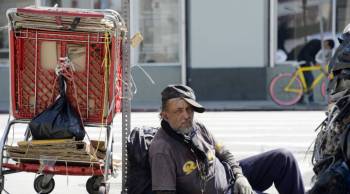