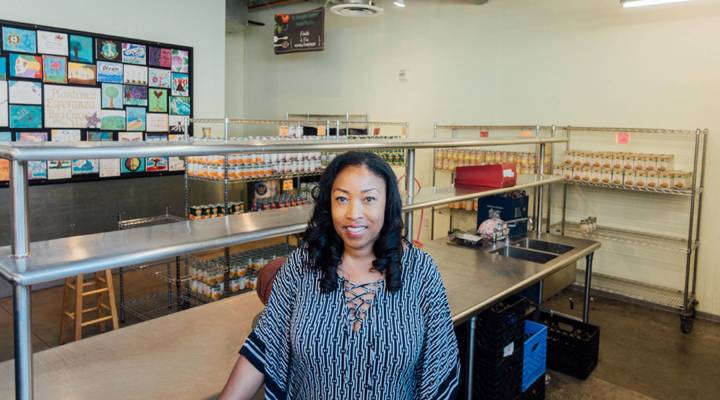 Va Lecia Adams Kellum points out nearly empty baskets of fruits and vegetables as she walks through the pantry at St. Joseph Center in Los Angeles.

Adams Kellum, the nonprofit’s president, said the stock of produce, eggs and canned goods for low-income and homeless Angelenos looks thin after a busy day of service.

“If we needed to open like this tomorrow, we wouldn’t have enough to serve the people who need help,” Adams Kellum said.

The demand for a safety net like this is growing across Los Angeles.

An annual tally by Los Angeles County indicated that 57,794 people are homeless there on a given night. That’s 23 percent more than in 2016.

In November, city residents overwhelmingly passed a $1.2 billion bond measure aimed at building more housing and facilities for the homeless.

And more than two-thirds of Los Angeles County voters in March supported a quarter-percent sales tax hike. It’s expected to raise around $3.5 billion over 10 years for supportive services.

“It’s clear that people want action,” said Peter Lynn, the executive director of the Los Angeles Homeless Services Authority. “We need to get people housed as quickly as possible.”

Lynn said voters used the ballot box to send elected officials a message. But even with broad electoral support, building housing and expanding services for the homeless in LA remains complicated.

A city-owned parking lot on Venice Boulevard is the proposed site of a new housing development, including units for low-income renters and supportive housing for the homeless.

“We’ve got to build in order to really make a dent in the problem,” said Becky Dennison, executive director of Venice Community Housing.

Dennison’s group is behind a proposal to turn a city-owned parking lot on Venice Boulevard next to the historic canal district into low-income housing. The plan sets aside 68 units for the homeless.

Supporters say this is the kind of development where the new city and county funding measures could make a real difference.

But critics have also been showing up to public meetings. The neighborhood group Venice Vision raises concerns about drugs and crime on its website. It also says there are too many homeless facilities proposed for the area.

“We add value to neighborhoods,” she said. “Our tenants are good neighbors. We move folks off the streets into housing, which is something that’s good for the neighborhood overall.”

Across town in Boyle Heights, a plan to build 49 units of affordable housing on a vacant lot is now stuck in limbo after an appeal by a neighboring business owner.

Dennison said the Venice proposal is still in its early stages.

Meanwhile, county officials have promised to get 45,000 homeless people off the streets in the first five years of spending the new voter-approved sales tax funds.