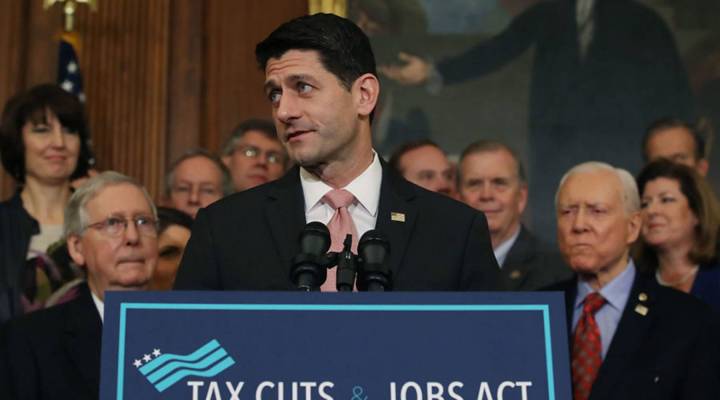 COPY
U.S. House Speaker Paul Ryan (R-WI), flanked by Republican lawmakers, speaks during an enrollment ceremony for the conference report to H.R. 1, the Tax Cuts and Jobs Act that was passed by the House and Senate, on Dec. 21, 2017, in Washington, D.C. Mark Wilson/Getty Images
Tax Bill 2017

U.S. House Speaker Paul Ryan (R-WI), flanked by Republican lawmakers, speaks during an enrollment ceremony for the conference report to H.R. 1, the Tax Cuts and Jobs Act that was passed by the House and Senate, on Dec. 21, 2017, in Washington, D.C. Mark Wilson/Getty Images
Listen Now

The National Association for Business Economics quarterly survey of corporate economists finds U.S. businesses are very upbeat about growth for the rest of this year. But those strong hiring plans and expectations of rising sales and profits are set against the realities of a rapidly tightening labor market. It’s just increasingly difficult for businesses to attract and retain the workers they need.

Meanwhile, recent tax legislation backed by the Trump administration and congressional Republicans appears to be having little impact on corporate decision-making.

NABE analyst Ken Simonson said one of the questions in the survey was: “Has your firm adjusted plans for hiring or investments as a result of the 2017 Tax Cuts and Jobs Act?’’ Two-thirds said their companies had made no changes.

President Donald Trump and Republicans leaders insisted that business tax cuts would spur hiring and investment. Instead, the tax savings are mostly going to boost corporate profits and shareholder returns.

Simonson said as companies face stiffer competition to hire workers, “more than one-third have raised pay” in the past quarter. “We had other firms that said they were training internal staff for promotions, had lowered their requirements for qualifications, or invested in labor-saving processes,” Simonson said. Companies report they’re grappling with labor shortages for both skilled and unskilled workers, according to Simonson.

Tony Uphoff, CEO of Thomas, a nationwide business-to-business sales and data platform for manufacturers and suppliers, said he sees plenty of evidence of labor shortages across the economy. Uphoff cites a 2015 report, “The Skills Gap in U.S. Manufacturing,” issued by Deloitte and the Manufacturing Institute.

“We’re starting to see a massive job shortage in U.S. manufacturing,” Uphoff said. Over the next decade, he said that means “…roughly 2 million jobs left open, because U.S. manufacturers can’t get the right talent in the door for those jobs.”

Part of what’s going on is that every day, thousands of baby boomers retire, and many of them have highly developed skills in manufacturing and the trades.

“They’re leaving a large number of jobs that U.S. manufacturers are struggling to fill,” he said, adding that young workers aren’t getting the training or encouragement to pursue well-paying careers on the factory floor.