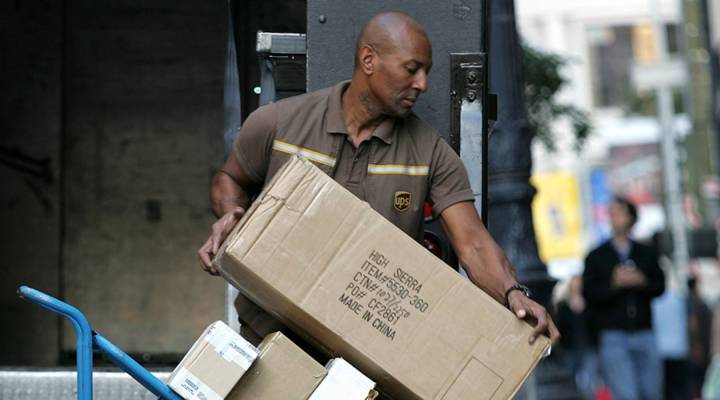 Tomorrow, the U.S. Supreme Court will hear arguments in South Dakota v. Wayfair, which could determine the future of who collects online sales tax.

The backstory: South Dakota passed a law in 2016 requiring out-of-state retailers to collect tax on purchases made by state residents. Three big online retailers — Wayfair, Overstock and Newegg — sued, citing a 1992 Supreme Court case that required merchants to have a physical presence in a state in order to be required to collect sales tax.

Let it be known: While online retailers aren’t required to collect state taxes (unless they have that physical presence), everyone who has bought something online is still required to pay tax on those purchases. Though most Americans don’t.

Marketplace Tech host Molly Wood talked about the case with David Gamage, a law professor at Indiana University Bloomington. The following is an edited transcript of their conversation.

Molly Wood: How significant are the dollar amounts here? How big a deal is this and how significant has e-commerce been on this state-by-state tax landscape?

David Gamage: It’s at least a moderately big deal. How big a deal it is is somewhat controversial. There are different estimates. Amazon used to not collect sales tax in most states. Today, Amazon, which of course is the biggest player by far, collects sales tax in every state, but only on direct sales. So about half of Amazon’s sales are indirect through its marketplace affiliate vendors. And Amazon doesn’t require those affiliate vendors to collect sales tax. So a good percentage, maybe say 30 percent of Amazon’s sales, there’s still no sales tax collected. And then, when you look at other big players — Wayfair, Overstock, Newegg — these are players who are pretty big vendors, several billion in sales each year nationwide, and yet aggressively organize themselves so as to escape sales tax collection obligations in most states to the greatest degree possible.

Wood: And why is that? Is it because consumers don’t want to pay?

Gamage: There’s evidence to think that most consumers aren’t aware. There’s a large number of customers who decide they want to buy something, they look online at a price, maybe in Google’s marketplace. Maybe they look at a Best Buy store and compare to Newegg, and they see the final price listed after tax is 7 percent or 8 percent less on Newegg because there’s no tax included. And there’s evidence that this has a pretty significant effect on consumer purchasing behavior, which has harms to local economies, jobs, state revenues, etc.

Wood: Amazon, we should note here, is not one of the companies involved in this case that the Supreme Court is going to hear arguments on, South Dakota v. Wayfair, but how large does Amazon loom in this conversation? At this point, is this almost like the only advantage Wayfair, Overstock and Newegg have over Amazon?

Gamage: It’s an argument. You know, in the early years, Amazon was very committed to this tax-evasion, tax-avoidance strategy. This is one of the reasons Amazon is located in Washington state. They didn’t want to locate in California because they didn’t want to collect sales tax for California. But over the last six, seven years or so, Amazon has reached a series of agreements with state governments which have led to Amazon collecting sales tax on more and more purchases. At this point, Amazon might have more to gain from the government winning in the Wayfair case than lose. Amazon is maybe losing business right now to some of these other players that are more aggressive in the tax-evasion strategy, and Amazon might be better off overall collecting sales tax on all of its sales so long as its competitors have to as well.

Wood: Finally, let’s take a little look at the history of the precedent-setting case here from 1992, Quill v. North Dakota. It dealt with mail-order catalogs, which I love that two Dakotas are involved here, too. At that time, what was the reasoning behind requiring a physical presence? Where did that argument come from?

Gamage: It’s important to understand, when the Quill case was decided in 1992, it was decided as something of a compromise. There was a question about what the law was prior to Quill, and the Supreme Court decided the Quill case in a way that invited Congress to take up and resolve the issue. But Congress has completely failed to do that. It’s been decades now since 1992, and the initial expectation that Congress would be up to the task of resolving this problem, it’s been shown that our political process just isn’t up to that task. And that’s what’s brought the Wayfair case, where now the dominant thought in the field is it’s going to be up to the Supreme Court to resolve this issue because Congress hasn’t.

Wood: If we had a nickel, David, for every time …

Gamage: Well  yeah. I should say the primary argument in the Quill case for preventing state governments from just taxing all out-of-state vendors is compliance costs. The fear would be every state has different tax laws, localities have different tax laws, there’s potentially thousands of jurisdictions that have the ability to impose sales tax collection obligations on out-of-state vendors. And the fear would be, that that would be expensive in terms of compliance costs for vendors selling nationwide. Today that’s somewhat less of a concern because software has resolved a lot of these problems.