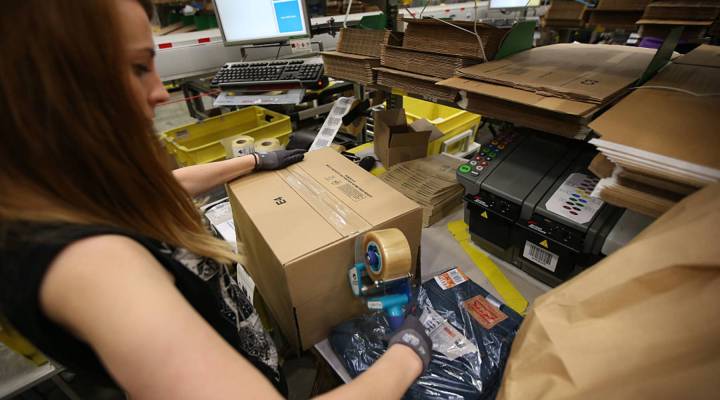 COPY
A parcel is prepared for dispatch at an Amazon warehouse.  Peter Macdiarmid/Getty Images

A parcel is prepared for dispatch at an Amazon warehouse.  Peter Macdiarmid/Getty Images
Listen Now

Have you ever noticed that when you go on Amazon, sometimes you get charged sales tax and sometimes you don’t? That’s because different rules apply for different states, and there’s a lot of grey area. But now, under pressure from state governments, the company has agreed to collect them uniformly across the country. With that out of the way, revenue-hungry states are shifting their attention and trying to force the rest of online retail to pay up.

That’s got many businesses worried, including one just east of Los Angeles. It’s called Upak, and if you’ve ever bought a fancy shipping envelope online — like one covered with red hearts or yellow sunflowers — there’s a good chance it came from here.

“Instead of a regular plain white mailer, we have a lot of custom prints, and a lot of designs,” said Vice President Bruce Mayclin. “It makes it look a lot nicer, it makes their package noticed.”

Upak sells $7 million to $10 million worth of mailers nationwide, Mayclin said as he walked through his warehouse.

“It’s a very good business. We are growing a lot. We cannot complain,” he said.

Like the online retailers he supplies, Mayclin doesn’t have to charge you any sales tax unless you live in a state where his company has a physical location — like here in California. So, he does collect tax from California buyers and sends it to the state. If he was forced to collect and send taxes from everywhere else, Mayclin said it will cost him time and money.

“That’ll be a nightmare. It’ll be extremely hard, if not impossible to gather tax from every municipality across the country,” said Mayclin.

With tens of thousands of online retailers in Mayclin’s position, that’s a whole lot of lost revenue every year for states.

John Hicks, executive director of the National Association of State Budget Officers said it’s “something on the order of $23 billion.”

States have tried so many ways to get that revenue, he said, that they’re now targeting the big one: the Supreme Court. The ruling that companies only have to collect sales tax if they have a physical location in the state comes from a case called Quill Corp v. North Dakota. This was 1992, before Amazon was even a thing.

Now it looks like the court may be willing to revisit the issue. Two years ago, Supreme Court Justice Anthony Kennedy said the ruling was harming states ” to a degree far greater than could have been anticipated”— and that the legal system should find a way to revisit Quill.

“The idea is to tee up the issue for litigation so that it can be taken up very quickly by the U.S. Supreme Court,” he said.

One example: South Dakota, which passed a law requiring all online stores with sales in the state of more than $100,000 to collect taxes. A group of online retailers have already sued the state, and the issue is now before South Dakota’s highest court. If it reaches the Supreme Court, Stark said killing Quill might appeal to either side of the the divided bench.

“It could actually bring together both liberal and conservative justices who for different reasons, think that states ought to have more latitude on this question,” he said.

If that happens, you can bet your online shopping bills will get a bit pricier.