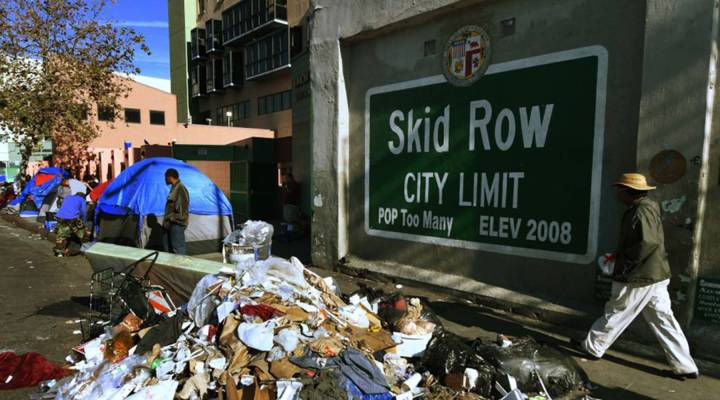 When Los Angeles opened its Section 8 waiting list last year for the first time in a decade, Elianna Cortez was hopeful. She applied, along with most of the 150 other women on her floor at a Skid Row homeless shelter.

Cortez has been staying at the 11-story Weingart Center, one of dozens of homeless services providers in this downtown neighborhood with the densest concentration of homeless people in the country.

“I call it temporary displacement,” said Cortez from the busy sidewalk outside. “That’s all it is to me.”

Last year, the U.S. homeless population ticked up for the first time since 2010, led by a 26 percent spike in homelessness in Los Angeles. Meanwhile, the federal government’s main tool to subsidize housing for those who can’t afford it, Housing Choice vouchers, formerly known as Section 8, are also in short supply. Just one in four people eligible for that rental subsidy nationwide get it.

Cortez is 31. She’s a tattoo artist, but she’s been out of work and on the street since her accident about a year ago.

“I got hit by a car,” Cortez said. “I was in coma for almost a month. My second home is a frickin’ hospital.”

For much of her time living on Skid Row, Cortez was pregnant, usually living in a tent just to have a place to lie down during the day. She receives what’s called general relief from Los Angeles County, $200 a month, and does freelance tattooing. She doesn’t make enough money to afford rent.

“I really got to stick it out and live in these dirty conditions,” said Cortez, pointing to the rows of tent encampments outside the Weingart. “There’s hepatitis going around. We’re eating these leftover foods.”

She is finally getting help through Weingart: a housing voucher. Not through the normal Section 8 process lottery and waiting list process, but through a county program that subsidizes housing for homeless people who, like Cortez, use a lot of county health services.

Just like with Section 8, she’ll pay 30 percent of her income for a fair market rent apartment and the rest is covered.

“So now I just look for a property that will take it,” she said.

Los Angeles County’s Housing for Health director Marc Trotz says the program has housed 4,000 people in the past 5 years.

“If you want to house a homeless person, they need a rent subsidy and support services,” Trotz said. “It’s not necessarily as complicated as everybody tries to make it.”

He says this approach actually saves money. For every dollar invested, the county government saves $1.20 in healthcare and social services costs, according to a Rand Corporation study.

“People will sometimes blanche about the notion of potentially a lifetime subsidy,” Trotz said. “But when you compare it against the human cost, the financial cost of leaving people to essentially die on the streets, the cost is inconsequential.”

In 2016, Los Angeles voted for a quarter-percent sales tax to fund homeless programs and a $1.2 billion bond measure to fund construction of 10,000 units of housing for homeless people. Those measures set aside more than 30 percent of the city’s Section 8 Housing Choice vouchers for the homeless.

Trotz said the Housing for Health program does use some of those federal vouchers. But to make up for the shortage, LA County started its own local low-income subsidy pool, with $4 million dollars from the Hilton Foundation.

“You can advocate on the federal level for Section 8 budgets of the past, but they’re not there now and we’ve got tens of thousands of people living on our streets,” Trotz said.
Trotz said the local subsidy is more flexible than Section 8, which requires drawn out inspections and rejects applicants who are undocumented or have serious felonies. This way, with the help of a case worker, homeless people can get into rental units faster.

There are more than 60 local low-income rental assistance programs across the country, according to the Center for Budget and Policy Priorities.

“While the programs definitely have some utility, they can’t replace federal housing vouchers,” said the think tank’s Peggy Bailey. “Most of them are small and aren’t meeting the scale of the need either.”

The need is growing because housing prices are rising.

“We’ve moved from a nation which had surplus of housing units that were affordable to poor people to one that has a deficit,” said Nan Roman, President and CEO of the National Alliance to End Homelessness.

There are 3 times as many low-income households that need rental housing than there are affordable and available units. Roman says you could fix that on the supply side, by building more affordable housing, which can be slow going. Or the demand side: Section 8.

“Vouchers would be the solution, pretty much, to homelessness,” Roman said. “But there are not enough vouchers, because there’s not enough money invested in the program.

In last week’s down to wire budget deal, Congress did approve spending more on HUD and Section 8. The budget is expected to provide 60,000 new vouchers nationwide.