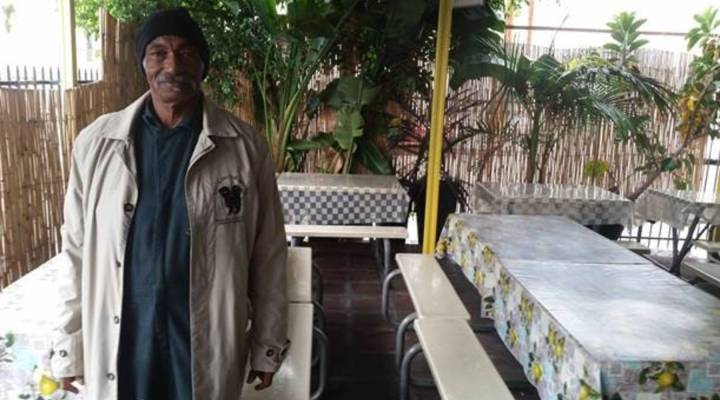 COPY
Manuel Compito, a homeless advocate, at a restaurant on the border of Skid Row in Los Angeles, an area that has become emblematic of the city's homelessness crisis. Carla Green

Manuel Compito, a homeless advocate, at a restaurant on the border of Skid Row in Los Angeles, an area that has become emblematic of the city's homelessness crisis. Carla Green
Listen Now

In November, Los Angeles voters committed $1.2 billion to addressing homelessness with passage of a proposition called HHH. The city’s homeless population is second only to that of New York, a city twice its size. About 28,000 people are estimated to be sleeping on the streets of LA on any given night.

Proposition HHH will specifically target chronic homelessness. Priority for most of the housing will go to people who’ve been on the streets for a long time, with no respite. The chronically homeless make up about 30 percent of LA’s homeless population. And the housing would come with built-in services, like mental health counseling and job training.

“You don’t have to be completely stable to come into housing, because the theory is – to help you stabilize, whether it’s physically or mentally — housing is really critical,” Chavez said.

But not everyone agrees that the chronically homeless should be first in line for housing.

Like Manuel Compito, a homeless advocate in Skid Row. That’s an area of downtown LA that’s become emblematic of the city’s homelessness crisis. When his older son was little, Compito himself was actually living there on and off. And he said families should be the city’s priority.

“There’s nothing in HHH, no provision, that says they’re going to build X amount of housing for families.”

But Chavez said some of the housing would likely be for families.

“What a lot of developers are doing now is actually mixing individual units with family units,” she said. “I guess – you shouldn’t go away thinking most of these projects will be projects just for individuals.”

It can be a numbers game, said Dora Gallo, CEO of a nonprofit affordable housing development organization called A Community of Friends. And that numbers game doesn’t always favor families.

“Families tend to be in and out of homelessness,” she said. “And they may not have been homeless for that long a period of time.”

And, for his part, Compito is skeptical about how the HHH money will be spent.

“We’ll see how many families get housed,” he said.

The city plans to award the first development contracts in July.