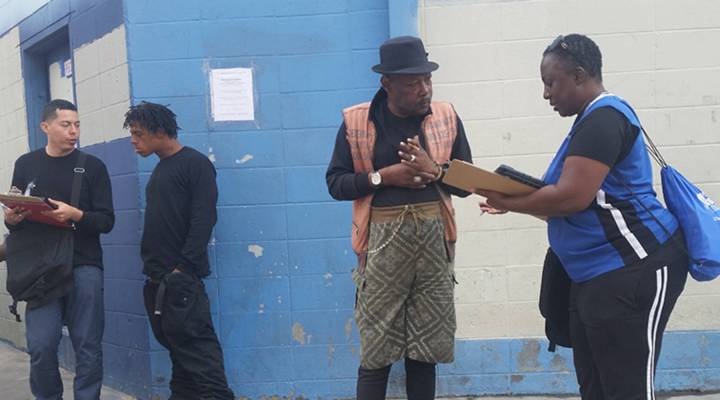 COPY
A Los Angeles survey is looking beyond the statistics to find out who is experiencing homelessness and why. Carla Green

A Los Angeles survey is looking beyond the statistics to find out who is experiencing homelessness and why. Carla Green
Listen Now

Larry Dunn was standing on a corner in Skid Row, the iconic neighborhood of downtown Los Angeles that’s home to thousands of homeless people, including Dunn. He was being interviewed for Los Angeles County’s annual homeless count.

“So you’re a young man, huh?” the surveyor asked him.

Local governments around the country conduct regular homeless counts to document the number of people experiencing homelessness in their cities and towns, a number that has climbed above 500,000 nationwide in recent years, according to U.S. Department of Housing and Urban Development.

Skid Row resident Larry Dunn was one participant in the demographic survey of Los Angeles’s homeless population this year.

That data is used by governments and homeless service organizations to plan and budget. And in order to spend money on homelessness effectively, agencies need to know not just how many people are homeless, but who they are. That’s why, in Los Angeles, that count includes a demographic survey.

Last year’s survey revealed a 55 percent increase in the number of homeless women over 2013. There are factors that could account for part of that spike, including better methodology. But Downtown Women’s Center CEO Anne Miskey said there were definitely more women on the streets.

“We had an idea that the numbers had been increasing,” she said, “but had no idea that it was quite that high a rate increase.”

That new data resulted in more cash for women’s services. Miskey said the women’s center received a $2 million grant from the county health department. And that’s not all.

“For example, the city budget put some line items that specifically related to women,” she said. “One was around trauma care, because women are victims, more than any other group, of severe trauma, sexual, violent trauma.”

Miskey also said that the new numbers — and the influx of cash — meant they could hire more staff. They started a new domestic violence program.

Back out on the streets of Los Angeles, University of Southern California researcher Karen Lincoln said that was why the demographic survey matters. Lincoln led this year’s demographic survey, which was a collaboration between the university and the Los Angeles Homeless Services Authority.

“It’s important to get an understanding of changes in the homeless population,” she said.

Lincoln said part of that process involves adjusting the survey year by year. This year, there was a set of questions added about domestic and sexual violence after last year’s spike in the number of homeless women.

The questions ask if a person has ever experienced domestic violence; if they’ve ever been “forced, threatened, or pressured into performing a sexual act with another person”;  or if they’re being stalked or harassed.

Homeless advocates are pushing for even more questions that they hope will illuminate a person’s path to homelessness, to help organizations address the root of homelessness, as well as its symptoms.

This year’s survey results, including the new data on domestic violence, are expected to be published later this year.