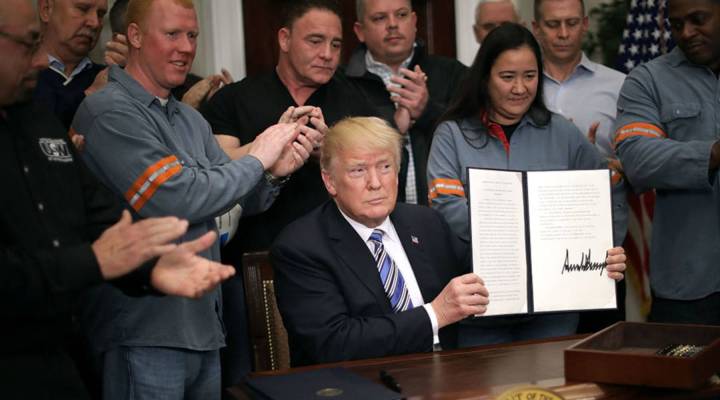 COPY
Surrounded by applauding steel and aluminum workers, President Donald Trump holds up the Section 232 Proclamation on steel imports that he signed at the White House on March 8. Chip Somodevilla/Getty Images

Surrounded by applauding steel and aluminum workers, President Donald Trump holds up the Section 232 Proclamation on steel imports that he signed at the White House on March 8. Chip Somodevilla/Getty Images
Listen Now

President Donald Trump’s announcement of new tariffs on steel and aluminum has lots of people talking about “protectionism,” which is a trade policy where countries “protect” their domestic industries from foreign competition with tariffs on foreign goods, special tax breaks or other incentives for domestic producers, or some other economic measures.

The Trump administration has been projecting a more protectionist stance on global trade since the president came into office, withdrawing from the Trans-Pacific Partnership, demanding a renegotiation of the North American Free Trade Agreement and generally taking a tougher stance on global trade deals. Stratfor Worldview predicted back in January a more protectionist America would be a defining characteristic of the global economy this year.

“For the most part,” Niemann said, these policies favor “large industries where you have large unions at stake in a lot of votes. Protectionism is almost always pushed by voter pressure and that’s how it basically comes about.”  It can also come into play when there’s an “infant industry” a country wants to develop, like supporting a burgeoning tech sector.

History of protectionism in the U.S.

Niemann points to the era just prior to World War II, when the U.S. used protectionist policies to build up a manufacturing base as one time when protectionism worked reasonably well. But, in most cases, she said these policies often prop up already-dying industries or sectors of the economy where the United States no longer has a competitive advantage.

“You will see a lot of money misspent and misallocated to industries they shouldn’t be trying to resurrect,” Niemann said.

The Trump administration argues we need this tariffs to protect industries we might need in an emergency. For example, if the United States went to war with a country the U.S. relies on for steel, it would be a security risk. This plan may protect some, but not all, domestic producers, but companies that rely on imports for their products (or to keep their products cheap enough to be competitive) are likely to feel the pinch.

“The immediate losers are usually the consumers simply because the cost of everything goes up and it creates inflation around the world,” she said.

Protectionist tariffs also have a history of causing trade wars that can have serious consequences for American exporters.