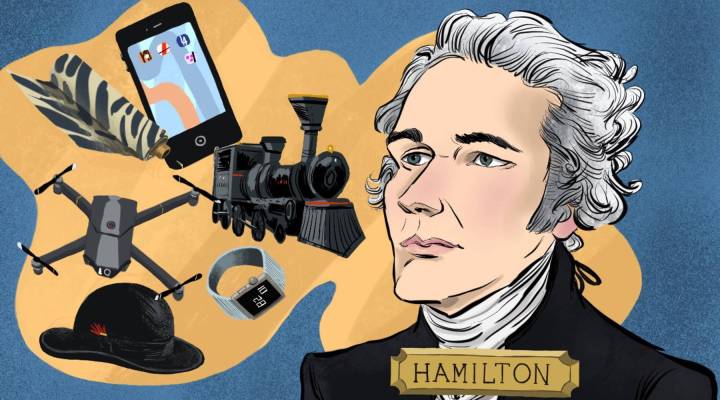 COPY
The protectionist tendencies in today's political climate actually have roots reaching back to Alexander Hamilton. Ken Garduno, Illustrator
Trade Off: Stories of Globalization and Backlash

President Trump has made it clear that he wants to put America first. Globalization and free trade, he suggests, have gone too far. Trump’s threat to slap tariffs on cheap Chinese steel is a prime example. In July, Trump told reporters he might impose both tariffs and quotas to protect the American steel industry.

The United States is no stranger to tariffs and quotas. In fact, the United States has a long history of protectionism going all the way back to the earliest part of the American republic. Let’s start with Alexander Hamilton, perhaps now known best as that guy from the Broadway musical who dies dueling the vice president. But Hamilton, the country’s first treasury secretary, could be called America’s original protectionist.

Hamilton argued that in order for the U.S. to defend itself and be truly independent of Britain, it needed factories, not just farms. Britain had banned the colonies from importing anything that would enable them to build an industrial economy. After the U.S. won its independence, Hamilton wanted to change that. He made the intellectual argument for homegrown industries in his “Report on Manufactures,” arguing to Congress that it should promote manufacturing so the U.S. could be “independent on foreign nations for military and other essential supplies.” He even engaged in a bit of industrial espionage, sending men into British textile mills to spy on and copy the technology.

Historian Eric Rauchway, of University of California, Davis, said Hamilton believed that in order for the United States to compete with a superior British manufacturing system, the U.S. would have to raise tariffs on imports so high “that Americans would decline to buy British textiles in favor of the inferior American products.” That would give American manufacturers the profit margins they needed to invest in improvements.

“So this is the classic infant industries argument,” Rauchway said. “And Hamilton stated that this is a case where if you want to contend with success, that is to compete with a better system, it is evident that the interference and aid of governments are indispensable.”

Hamilton also gathered a group of investors to try to build America’s first planned industrial community on the Passaic River in New Jersey. It was called the Society for Establishing Useful Manufactures, or S.U.M. Its initial experiment failed, but eventually, the city of Paterson was established on the site and became a quintessential American factory town.

Hamilton chose the Great Falls of the Passaic River in New Jersey for an industrial experiment that initially failed. The site later became Paterson, a quintessential American factory town.

That city and other early industrial centers in the United States benefited from the protectionist tariffs passed by Congress in the 1800s. During the 19th century, it wasn’t uncommon for some foreign goods to be taxed up to 50 percent. Tariffs on manufactured silk goods averaged 60 percent. Paterson’s silk industry was so successful that the city was dubbed “Silk City” at one point.

Today, a statue of Alexander Hamilton overlooks the powerful falls that powered hundreds of mills in the city’s heyday. It’s part of Paterson Great Falls National Historical Park, where the Passaic River crashes 77 feet into a stunning chasm.

Ilyse Goldman, supervisory park ranger, regales tourists with tales of Hamilton and George Washington picnicking at the falls during the American Revolution. Goldman said the two dined on cold ham and tongue and drank grog. She imagines that perhaps Hamilton realized the Passaic Falls was a perfect place to build an industrial city.

“He gets up from the picnic, he goes over to the chasm, he looks at the falls and he says, ‘Wow, y’know, water’s powerful,’” she tells a group of tourists.

Giacomo DeStefano, director of the Paterson Musuem, said over the 19th  and 20th centuries, the city’s mills manufactured everything from cotton and silk to paper and firearms. Later, it was locomotives and airplane engines.

“I mean, obviously not the industries that Hamilton was thinking at the time, but everything developed right along the Passaic River,” DeStefano said.

American manufacturers in the North generally supported protectionist tariffs. Southerners supplied most of the world’s cotton, so they naturally embraced free trade, or at least, freer trade. Jeffrey Williamson, an emeritus professor of economics at Harvard University, said there was a pretty clear regional divide.

“I think it’s fair to say that most people above the Mason-Dixon line were protectionists and the ones for free trade were on the south side of it.”

Those free traders in the South were Democrats, mostly, and the protectionists Republicans. Some nicknamed the GOP the “Grand Old Protectionists.”

“I think it’s hard for us nowadays to appreciate the extent to which, in the 19th century, the tariff was for many people a religious conviction,” said historian Rauchway. “Of course, for Republicans and for the majority view in the 19th and early 20th century, to be pro-tariff was to be American.”

When the protectionist William McKinley ran against William Jennings Bryan in 1896, McKinley’s supporters commissioned a campaign song called “McKinley Protection.” The lyrics echo themes that still resonate today. Cheap consumer prices versus higher domestic wages, shuttered American factories and a yearning to “bring back prosperity.” In the song’s fifth verse, the “great speakers” refer to free traders of the day who saw tariffs as something that made prices higher for ordinary Americans and simply enriched industrialists’ profits:

But the U.S. wasn’t shutting itself off to globalization completely in the 1800s. Not at all.

A political cartoon derides a protectionist tariff backed by Republican William McKinley presented here as the “gatekeeper” on “Prosperity Road.” A rich industrialist sits on a pile of moneybags while a farmer pays him a “toll.” The implication is that the tariff benefits big “monopoly” business at the expense of ordinary Americans.

“The keepers at the gate”/Keppler. Courtesy of the Library of Congress.

That openness to the “movement of people” didn’t last. Consider the the Chinese Exclusion Act of 1882 and  the Immigration Act of 1924, which went even further and severely cut back the flow of newcomers to the U.S.

Economist Williamson said free trade started to make ideological inroads in the White House under Democrat Franklin Delano Roosevelt. After the Great Depression and the devastation of World War II, Roosevelt believed open trade would not only prevent further wars, but help get the European economies back on their feet. Williamson said the thinking went something like this: “The second world war was dreadful, the interwar was a mess. We have to find a way to get back the kind of globalization connections we had in the late 19th century and the early 20th century to avoid another conflict.”

But historian Rauchway argues that it took quite a while for the U.S. to make a strong ideological commitment to free trade.

“The United States is never really a sort of zero-tariff country the way that Britain was before it when it was a world power,” Rauchway said. “It’s not until I think after Reagan that you can really say that it becomes almost an article of faith with the emergence of what is now come to be known as the Washington Consensus as a major policy position.”

If industrial cities like Paterson were built on trade protectionism, they’ve also been torn down by free trade. Museum director DeStefano said much of the textile business in Paterson went south, where the lack of unions made it easier to cut costs and compete. Other industries fell victim to globalization, too.

“The writing was on the wall,” DeStefano said. “Foreign products were coming in, and you really couldn’t keep them out.”

But even though the factories are long gone, there’s still a palpable sense of loss in Paterson. It’s the loss of pride and purpose that came with “Made in the USA.”  Tourists express a similar sentiment.

“I didn’t know about Hamilton until the play that got real famous,” Montes said.

Montes has worked in manufacturing, law enforcement and now private security. Like many Americans, he’s searching for a balance when it comes to globalization.

“Free trade has hurt us in an extent, but at the same time free trade has helped us. But I think we need to look more and be protective of the U.S. Because personally, I’ve been overseas. I’m a veteran. We give to a lot of other countries, and we’re not getting nothing back in return.”

Alexander Hamilton might have related. He certainly resented Britain’s efforts to keep the U.S. dependent on British goods. But Hamilton also knew protectionist tariffs “taxed consumers and handed monopoly profits to producers,” writes Ron Chernow, author of the bestseller “Alexander Hamilton.” He preferred government subsidies to industry, but that didn’t prove as popular. According to Chernow, Hamilton wanted tariffs to be “moderate in scale, temporary in nature, and repealed as soon as possible.”