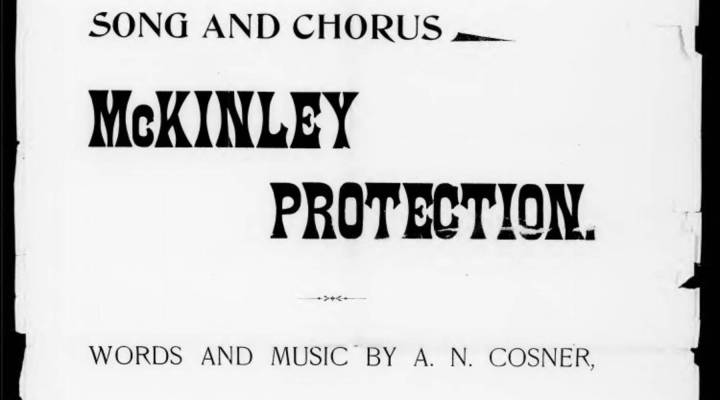 COPY
This is the cover for the sheet music of the original "McKinley Protection" campaign song. Columbia University Libraries
Trade Off: Stories of Globalization and Backlash

This is the cover for the sheet music of the original "McKinley Protection" campaign song. Columbia University Libraries
Listen Now

In recent years there has been growing discontent in Western countries; between talk of building border walls and Brexit, it is easy to think that a new era of  global retreat is under way. But, disputes between trading partners and rhetoric about protecting domestic industries from foreign trade (protectionism) isn’t new. In fact, the U.S. was having the same argument back in 1896, when Democrat William Jennings Bryan campaigned against Republican William McKinley, a protectionist.

McKinley’s supporters published a campaign song called “McKinley Protection.” Marketplace asked Minneapolis-based vocal ensemble, Cantus, to recreate the campaign song, which you can follow along with by clicking on the audio player above. The lyrics echo themes still debated today, like lower consumer prices versus higher domestic wages, competition from cheap foreign labor and “bringing prosperity back.”

For example, check out the fifth verse. It pokes fun at the “great speakers” of the day, like Bryan and his supporters who wanted to get rid of, or at least lower, protectionist tariffs:

“But things will be cheaper, the great speakers say

‘The tariff is a tax,’ and we’ll sweep it away,

‘Just look,’ said the speaker, ‘at this derby hat,

You’ll pay but a dollar for a beauty like that.

But, begorra, we don’t got the dollar,’ said Pat,

You could easily update that $1 derby hat for a cheap flat screen TV from China. Both are cold comfort to an unemployed American worker, no matter the era.

“Just shut up our markets to the foreigner’s mill

And give us – the laborers, a chance at the till

And we’ll bring back prosperity over the hill

When we get McKinley Protection.”

Any of this look familiar? Today it might mention lost American steel jobs or renegotiating NAFTA.

All of this is to say, what is old is new again and what is new again maybe never really went out of fashion.