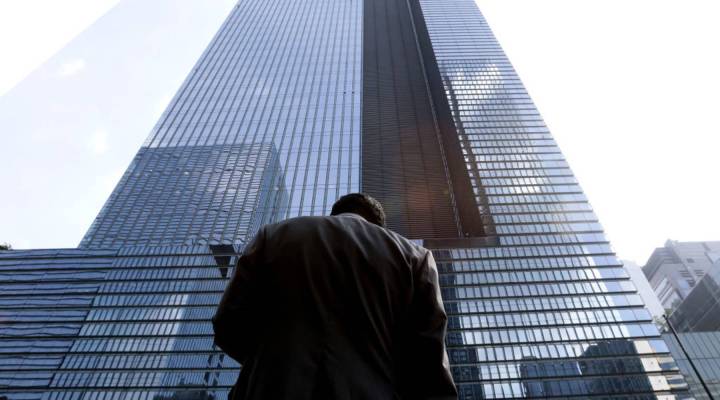 COPY
According to the latest Marketplace-Edison Research Poll, about 14 percent of men have personally experienced sexual harassment in the workplace. Chung Sung-Jun/Getty Images
Economic Anxiety Index®

According to the latest Marketplace-Edison Research Poll, about 14 percent of men have personally experienced sexual harassment in the workplace. Chung Sung-Jun/Getty Images
Listen Now

Eventually, it just became another part of his job.

He was 18, going on 19, in an entry-level job at a mortgage company in Orange County, California. She was management. And that gave her power.

“I mean, I didn’t want to lose my job,” said Burns, now in his late thirties. “So I complied.”

While the vast majority of workplace sexual harassment cases are brought by women, men too experience sexual harassment and abuse in the workplace. It’s an issue, surrounded by a culture of stigma and silence, that lawyers and advocates say often goes unnoticed and underreported.

A cycle of coercion

Burns was being groomed. He says it started small, with requests to bring paperwork left at the office to her house. Then she’d ask him to stay for a bit. Then came requests for massages and shoulder rubs. Eventually more.

“It got physical,” Burns said. “There was intimate contact.”

And it was ongoing. Requests to “bring over dry cleaning,” code for sexual acts, soon became more and more persistent. Burns says he became trapped in a cycle of physical coercion.

“I would be spending the night, leaving early, going home to shower and change, and then going back to work,” Burns said. “And she knew that I had to do it.”

She was his boss, in a position to make or break his career, and he was scared he’d be fired if he didn’t meet her demands. Plus, she told him nobody would believe him if he told them about it.

“The statement that she made was something along the nature of ‘I’m a successful, attractive woman,'” Burns said. “‘Who’s really going to believe you?'”

For men, stigma attached to sexual harassment can be a barrier to reporting it.

“The biggest factor is that men are embarrassed,” said Todd Harrison, a partner at a California law-firm that specializes in employment law and sexual harassment cases.  “They have pride that gets in the way, they don’t want to complain about it, especially to their male co-workers.”

Men can be reluctant to come forward due to societal norms that say sexual harassment is not a male issue or because they don’t want others to know.

“The more that men come forward, the easier it will be for other men,” Harrison said.

But men are hardly alone in being reluctant to report, the Equal Employment Opportunity Commission estimates that most people who have experienced harassment, regardless of gender, never file a formal complaint about it.

While in recent months, a number of high profile cases have come to light in which men sexually harassed other men in the workplace, neither the Marketplace-Edison poll nor the data available from the EEOC collected information on who did the harassing — a woman or another man.

Regardless of gender, “in almost all [cases], you’re always going to see the power difference,” Harrison said. “It becomes about domination, about demeaning the other person.”

“She was just my boss”

Paul Burns eventually brought the matter to his company’s human resources department. He says the representative did not take him seriously, no matter how explicit he became.

“When I tried to explain it, it was almost like he thought I was talking about a fantasy I wanted to have and that it was wishful thinking,” Burns recalled. “The only response, it was like a, ‘You should be so lucky.'”

People at work thought he was making a bad a joke. No one thought it was real. Burns turned to his girlfriend at the time, to share what he was being forced to do. She broke up with him, thinking he was confessing to cheating.

According to Burns, the boss told him she had been sexually harassed earlier in her career and told him he was lucky, because when it happened to her it was with someone unattractive.

“And that since she’s not, I should just be dealing with it,” Burns said. “I went to management so many times about it and it just got rebuffed away.”

There was no way to make it stop. So he quit.

What can workplaces do?

Workplaces can take steps to create an environment where employees feel comfortable coming forward with concerns about sexual harassment. It can come down to training about appropriate language and requests, the role of power and clear steps that management will take following an allegation, according to Harrison, the lawyer.

Harrison recommends that people document any instances of harassment or abuse and then fax, email or certify mail that to human resources.

“A lot of employers will say, ‘They never complained,'” Harrison said. “‘We never knew about it.'”

Five years later, Burns had a new job at a call center.

There, according to Burns, one of the floor leads made a comment of a sexual nature about his ethnicity. “Plus, other comments sexualizing me in a way that I didn’t want,” Burns said.

Again, in the workplace. Again, coming from a female supervisor. Burns quickly took the matter to human resources.

“I think it had to do with my previous experience,” Burns said. “I didn’t want to relive something like that again.”

This time the matter was immediately resolved. The floor lead was removed from his unit and he never had to interact with her again.

Burns was relieved. He had been nervous to come forward.

“Other men need to come forward and say ‘this happened to me’ and ‘this bothered me,'” Burns said. “If we don’t do that, this social stigma is just going to continue on.”