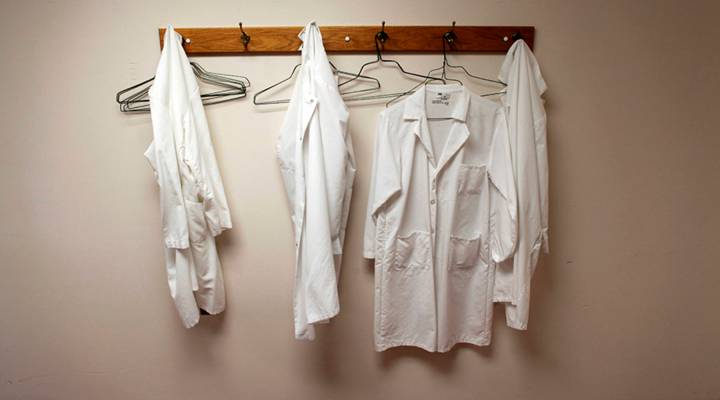 Science remains a male-dominated field, and in academia, some take advantage of that power. In a 2014 study, Kathryn Clancy, an anthropologist at the University of Illinois, found that harassment was pervasive at research field sites and few people knew of mechanisms to report incidents.

Since that 2014 study, Clancy has continued her work in this area. Last year, she published a survey examining the kind of harassment faced by women of color who work in astronomy. Among her findings: that 18 percent of the women of color she surveyed skipped professional events because they did not feel safe attending.

Last month, she spoke about harassment in science at a hearing before Congress. She talked about her work with Marketplace’s Kimberly Adams. An edited transcript of their conversation is below.

Kimberly Adams:  How common is harassment in science?

Kathryn Clancy: It’s about as common in the sciences as it seems to be in most male dominated workplaces especially ones that are very hierarchical. I’m beginning to kind of lump the military, politics, and sciences in kind of a similar bin, in my mind, the more I study this. These are places that are male-dominated, have a high degree of hierarchy in the way that they work. So in the sciences, the way that looks is when you’re a grad student, you often have this one adviser, and whether or not this adviser likes you, and thinks you’re smart, and thinks you’re a good scientist basically sets up whether or not you are going to get a job.

Adams:  You’ve said that there are three main things that happen to women who are sexually harassed. Can you go through those with me?

Clancy: Sure. So when women experience sexual harassment, their careers stall out, they intentionally take lateral moves in their careers rather than advancing, or they leave altogether. With that stalling out, a lot of times that’s because they’re meeting resistance where they are, or they have trouble moving forward. So a lot of women report to us, frankly, post-traumatic stress symptoms — so difficulty when they open up their research, even doing their research, because it’s so traumatizing to remember what that field site experience was like, so it slows their progress.

Adams: What are your recommendations to the Congressional committee you addressed, and to academia more broadly for how to address this issue?

Clancy:  There are a lot of ways that people have already — since our first paper came out in 2014 — started to make some really amazing changes in field sites. There are writing codes of conduct, sexual harassment policies. They’re making sure to get everybody together at the beginning and say “This is what I consider professional conduct. If you don’t act this way, that’s a problem for me.” But I have to say, I think the biggest issue is in universities themselves, because that’s where the reporting mechanisms are, is through their Title IX offices. And right now universities really think about Title IX in a letter of the law way, where they’re focusing on compliance. They’re focusing on: “OK we’re told we have to have sexual harassment training. What’s the lowest budget, crappiest training we can do so we can check that box?” So, universities have to decide to have a values into action approach to actually changing the way that they think about and address sexual harassment. And just having more opportunities for people to figure out what it means to be professional, and to be respectful, and to identify together what that positive climate should actually look like.

Adams: How did you get involved in this particular field of research?

Clancy: I’ve been doing a lot of women in science activism. But what really tipped me over into studying sexual harassment specifically was — a friend of mine who was assaulted at her field site. It wasn’t even so much the assault that drove me to want to explore this more, but the fact that when she reported it, it was incredibly re-traumatizing.

She tried to report to the field site director, who laughed in her face and called her a liar. She tried to tell her own adviser about the situation and he said “You know, I’m so sorry this happened to you, but if you report this or go any further with this, we’ll lose all that data.”

And that was the moment that did it for me. That moment of saying, you know, the data that we’re collecting is somehow more important than this person’s mental and physical health.