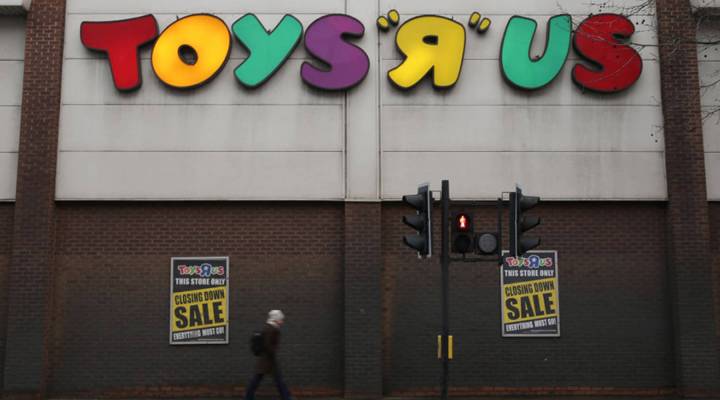 COPY
Toys R Us is closing about a fifth of its stores. DANIEL LEAL-OLIVAS/AFP/Getty Images

Toys R Us is closing about a fifth of its stores. DANIEL LEAL-OLIVAS/AFP/Getty Images
Listen Now

Update 3/14/18: Toys R Us told employees Wednesday it will go out of business, closing hundreds of stores and eliminating some 33,000 jobs in the U.S. alone.

In middle school, I took the train into Manhattan with some friends. We spent the afternoon at the 110,000-square-foot Toys R Us flagship store in Times Square. We rode a three-story indoor Ferris wheel, wandered through a life-sized Barbie Dreamhouse and stared up at a giant animatronic T. rex.

It was kind of over the top. But that was Toys R Us.

The retailer’s stores were “every little child’s dream manifested physically in this grand place, with toys — endless aisles of toys,” said Stephanie Wissink, a managing director at Jefferies.

Toys R Us was founded in 1948 in Washington, D.C., as a baby furniture business. By the mid-80s, it was a public company with hundreds of toy stores around the world and more than a billion dollars in sales. But soon, the company started losing ground to discount chains. In the late ’90s, Walmart took over as the country’s No. 1 toy seller.

In 2004, after years of flat sales and falling profits, the Toys R Us board of directors put the company up for sale.

The buyers were a group of private equity firms. Those are investment firms that bundle together money from investors to buy companies, fix them up by cutting costs and increasing sales, and then sell them or take them public to cash out.

“They make money the old-fashioned way,” said Donna Hitscherich, a professor at Columbia Business School. “You buy low and you sell high. So you try to find an opportunity that you can improve upon.”

And to really get what happened with Toys R Us, you need to understand how these private equity purchases work. They rely on something called a leveraged buyout.

If a private equity firm wants to buy a company, it’ll put up a small portion of the money. Then it’ll go to the bank and borrow the rest.

The key? “They put the debt on the company they buy,” Appelbaum said.

In other words, the firms take out these loans, buy a company and then make that company pay the loans back.

In 2005, the Toys R Us board of directors sold the company for $6.6 billion to the private equity firms Bain Capital and KKR and the real estate investment firm Vornado. The firms put up about 20 percent of the total and borrowed the rest.

Toys R Us became a private company with more than $5 billion in debt. And then things went off the rails.

“The beginning of the problems for Toys was that Amazon.com exploded,” said Charlie O’Shea, lead retail analyst at Moody’s.

During the next five years, sales at Amazon quadrupled to $34 billion.

“Amazon went into the toy sector in a big way,” O’Shea said, and it “added one more big competitor for Toys R Us.”

To compete, Toys R Us would have had to invest significantly in its website and stores. But the retailer was using most of its available cash to pay back its debt.

And that’s the thing about leveraged buyout deals. They leave companies with a lot of debt and almost no cash. If something goes wrong in the industry, it’s hard to survive.

Which brings us to last summer. Sales at Toys R Us had fallen for five years. Management hired lawyers to try to push off the company’s next loan payment. Word got out that the company might go bankrupt, and toymakers panicked.

One CEO, who asked to remain anonymous because he still does business with Toys R Us, was about to send millions of dollars worth of toys to the retailer.

“We were cancelling vessels,” he said. “We were doing everything we could to stop new goods getting on the water.”

Other toymakers demanded that Toys R Us pay them up front in cash. The retailer didn’t have it.

And that’s what drove the company to file for Chapter 11 bankruptcy in September. And in doing so, it joined a growing list of private equity-backed retailers to go bankrupt, including The Limited, Gymboree, Payless and Sports Authority.

In January, the retailer announced that it’s closing about a fifth of its stores.

Toys R Us and the private equity firms declined to be interviewed for this story. Vornado didn’t respond to requests for comment.

The private equity firms’ investors haven’t made money off this deal. But the firms themselves have. It’s unclear where Vornado ended up. But after collecting fees from Toys R Us, Bain and KKR each took home at least $15 million.