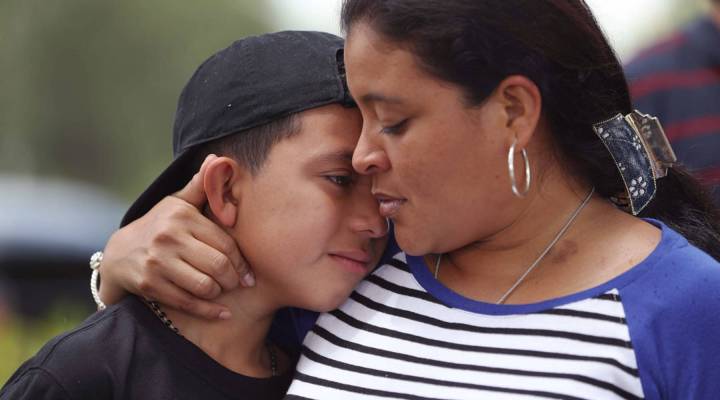 COPY
Jenny Martinez hugs her son, William Martinez, as they talk to the media about her trip from El Salvador and her need for asylum in America because of domestic violence as they join with protesters in front of the United States Citizenship and Immigration Services building on May 19, 2017 in Miramar, Florida. Joe Raedle/Getty Images

Jenny Martinez hugs her son, William Martinez, as they talk to the media about her trip from El Salvador and her need for asylum in America because of domestic violence as they join with protesters in front of the United States Citizenship and Immigration Services building on May 19, 2017 in Miramar, Florida. Joe Raedle/Getty Images
Listen Now

President Donald Trump, who has criticized family-based immigration programs, has proposed a merit-based one that would give points to candidates based on factors like education and English skills. Proponents of these merit-based programs argue that visas for skilled workers could bolster the economy — think wage increases and increased productivity.

But one paper, “The Law and Economics of Family Unification,” found no distinctions in earnings by type of immigrant visa (though the data that’s out there is limited). A large number of immigrants who come because of family sponsorship are very productive, says Alan Hyde, a Rutgers law professor and the author of the study.

He stopped by to talk to host David Brancaccio about some of his paper’s findings. Below is an edited transcript of their conversation.

David Brancaccio: We’re hearing a lot of this debate now about changing the rules of immigration in the U.S. The Trump administration wants to grant fewer family visas, ending, I think the president’s term is — a controversial term —  “chain migration,” reorient the system at some level to focus on individuals, what skills an individual might or might not have who wants to move here. But what kind of data do we have in trying to figure out the effects of this kind of big change?

Brancaccio: That’s interesting. So if you’re just asking the basic question about what types of occupations if people moved here, might they become more productive — we’re not quite sure.

Brancaccio: For political reasons we haven’t gathered the data or just somehow we don’t track it?

Hyde: Well, it’s getting worse. That is, the 2000 census was the last to ask people what country they were born in. That question wasn’t asked on the 2010 census. And as you may have heard, it’s controversial whether or not to bring it back. There are arguments on both sides of that.

Brancaccio: So very little official data. But you were able to do the DIY version of this? I mean, rigorous and scholarly, I’m sure.

Hyde: Well, I should say there are some smaller data sources that compare people by type of visa. Some scholars have done their own surveys. Some foundations have done their own surveys. The differences are not large between people who come because employers sponsor them and the people who come because family members sponsor them. And that’s a bit of a puzzle. It would seem like we should get more bang for the buck if we transferred visas from family members to employer sponsorship.

Brancaccio: But not a huge difference.

Hyde: Not a huge difference and for reasons that I’d be happy to explain. I think there’s probably less difference than meets the eye. My students and I set out to find alternative data sources on what immigrants who come under family sponsorship actually do when they come here. We looked at public health data, data on who’s raising America’s children, ethnographies of immigrant families. Now with all these situations, we don’t know whether the situations we’re looking at are typical or not or whether they’re generalizable. But it’s pretty clear that substantial numbers of immigrants who come because of family sponsorship either found or work in family businesses; they perform child care, either paid or unpaid within the family; they contribute unpaid labor to family businesses and to families. And if you add that up, it looks like we’re getting a very productive bunch.

Brancaccio: I mean, I guess part of the theory here would be that a family is a kind of network, and when you have a more resilient network, it might increase your chances for success.

Hyde: Well just so, just so. An immigrant who arrives with family sponsorship comes networked in the economy. If the family members who are already here are in a particular industry, the family-sponsored immigrant is very likely to work in that industry, or maybe found another similar kind of firm in that industry.

Brancaccio: But since some of this, people may feel, is counterintuitive, you’d think the person coming to the U.S. with a degree in nuclear physics or law or something would have a greater chance of success. You wish there were data.

Hyde: We don’t see much of that in the United States because the genius of the American system of immigration law is that almost everybody arrives sponsored. You’re either sponsored by an employer or you’re sponsored by a family member. We have very few options in our system where someone can petition for himself or herself and say, “Admit me to America, I’ve got great skills.” We have some, but the numbers aren’t large. Now Canada has run that experiment, and the results were not very happy. Canada admits under a points system where people petitioned for themselves, people who wish to immigrate to Canada. They list all the degrees they have. And they found under the first version of this system that they were admitting loads of engineers and physicians with degrees from universities in Eastern Europe or Asia that were not particularly respected by Canadian employers. Why those weren’t respected by Canadian employers is a difficult question on which there are different views. So they found that physicians admitted with degrees from foreign universities, maybe 18 percent of Indian physicians ever practiced medicine in Canada, 4 percent of Eastern European physicians ever practice medicine in Canada — only about two-thirds were working at all. The joke in Vancouver is if you need to see a doctor in a hurry, go down to the curb and yell, “Taxi.”

Brancaccio: It’s not a joke though, right?

Hyde: It’s not a joke. Lots of doctors in Canada are driving taxis. So the Canadians have fiddled with their system to add points for Canadian-employer experience, bring the employers back in, family ties to Canada. In other words, they’ve moved it more like our system where you need those family ties in the first place.

Brancaccio: So the experience north of the border suggests this is a complex issue and that as the U.S. tries to rethink its immigration system, it would do well to gather some data.

Brancaccio: If we could gather more data, what are some of the questions we need to ask ourselves if we’re contemplating the shifts in who we admit and who we don’t?

Hyde: I don’t want to venture on the question of what the census should ask, because a lot of people are debating that and I’m honestly not so sure. I’m not a demographer. I just write about immigration policy. It would certainly be nice to have some detailed smaller surveys showing us what immigrants actually do in the economy and how, if at all, it’s correlated with the type of visa that they come on. It also seems to me important that those surveys would look not only at paid labor on tax returns, but unpaid labor rendered to family businesses and to families.

Brancaccio: And a person engaged on this issue should pay attention to the process that the U.S. Bureau of Census is pursuing to figure out what do they ask next time.

Hyde: That’s the gold standard for data, because that’s everybody. And then the academic researchers can go into the census files and look for whatever correlations they want. But I do understand the concern of those who think this is the wrong time to bring back a question about what country you were born in.

Brancaccio: And overall, be careful about just making presumptions about a person’s career or academic pedigree when trying to figure out: “Is it going to work if they move to the United States?”

Hyde: That’s just right, David. You can’t tell by looking at an individual whether he or she came because a sibling sponsored them or an employer sponsored them. And you have to be careful about prejudices here. You also have to be careful about how people use the word skill when they talk about skilled immigration. Skills is not something that any system of immigration law can really observe at entry. The convention is to use the words “skills” to mean degrees. The more certifications and degrees you have, the more skilled you are as an immigrant in the literature. I think that’s a very deceptive way of thinking about the problem. We all know people who have lots of advanced degrees who really can’t do anything. And there are many people, immigrants among them, who may not have a lot of formal education, but they know how to do a lot of things that are very important in our economy.