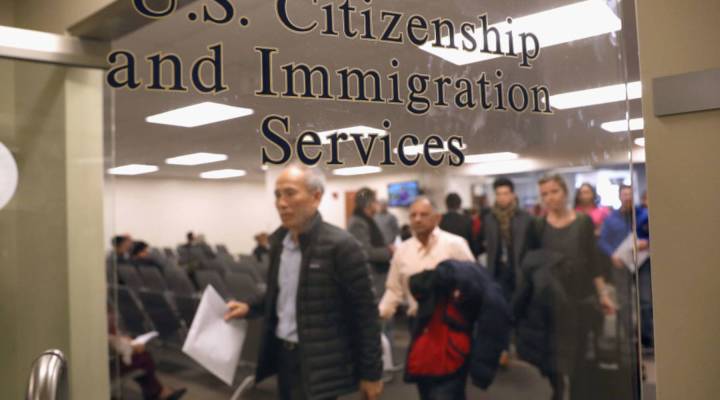 The high-profile political battles over immigration have focused extensively on a border wall and the future of the Deferred Action for Childhood Arrivals  program, designed to protect unauthorized immigrants who entered the country as children from deportation.

But flying under much of the public radar is the contentious debate over legal immigration. And there’s a lot at stake.

A proposed bill that President Donald Trump has endorsed known as the RAISE Act would cut the number of green cards awarded each year in half. Family reunification would no longer be a priority. Instead, those with higher education and skills would get priority for the reduced number of slots.

It’s not the first time America has grappled with immigration policy.

“America has always been ambivalent about immigration,” said Muzaffar Chishti, a director at Migration Policy Institute. “For a nation of immigrants, that may sound odd. But that’s been a part of our history.”

“George Washington thought that we did not need any more immigrants except a few skilled carpenters,” Chishti said. “We had campaigns against the Irish — the Know Nothing Party was established in the 1840s purely on the basis of keeping Irish out. In 1882, Congress enacted the infamous Chinese Exclusion Act.”

And for the first time, in 1921 Congress imposed quotas, not geographic limits, on immigrants — this time on people from Southern and Eastern European nations.

So, how will the proposed immigration policies play out today? The Penn Wharton Budget Model uses economic modeling to create simulators of how different policies could play out economically. Kimberly Burham, managing director, joined Marketplace’s Amy Scott to discuss it. An edited transcript of their conversation is below.

Amy Scott: So, at the Wharton Budget Model, you have these simulators that try to model how different immigration policies would play out in the future. How does that modeling work?

Kimberly Burham: We look at for hundreds of thousands of U.S. households, and we see how they work, and save, and get jobs, and get education, and eventually retire.

Scott: So it’s like a crystal ball that relies on a lot of data?

Scott: One immigration bill that President Trump has supported is the RAISE Act, which would cut in half the number of legal immigrants coming into the country. It would also move from a family reunification model to a merit-based system that awards points for education and skills. How do you see that playing out in the economy?

Burham: If it were to pass, the effects of reducing the number of immigrants coming in counterbalances the effect of increasing the skill level. And so by 2040, GDP would actually be 2 percent smaller than it would otherwise be if we just cut our current immigration policy.

Scott: You did find though that wages would rise slightly. What would drive that?

Burham: So wages would rise slightly, but only by a very small amount. So for instance, in 2027, the average hourly wage would be $42.12, instead of $42.02. It only increases wages by a very small amount, so it doesn’t induce very many domestic workers to enter the labor force or to work more. It wouldn’t be enough to offset the lost work and savings of the immigrant workers who are no longer entering the country.

Scott: The sponsors of this bill say it would protect American workers and increase wages. But you find a much more mixed picture than that. Other research has shown that immigration actually increases wages for most workers with the exception of the least educated. So how do you square those two arguments?

Burham: New immigrants are very highly attached to the labor force. They’re working, they’re working longer hours than the domestic population. So that’s one of the reasons that when immigrants come in, they really start to contribute to a long-run investment and savings and growth.

Scott: You know, when the data show that the economy overall benefits from immigration, that most American workers actually see their wages rise, where do you think the impression comes among many voters that immigration is hurting them?

Burham: So, I mean, other studies do show that new immigrants can compete with other new immigrants. So maybe that gives the impression. Also, of course, ours is taking a thousand-foot view of the whole entire economy. So we’re not really speaking to what might be happening in particular areas.

Scott: So people may be feeling in their own experience that their wages have have gone down with an increase in immigration, whereas the bigger picture may be different.

Scott: You’ve run tons of different scenarios on your simulators. Have you found a sweet spot for the American economy in terms of immigration reform?

Burham: So we find that we get the highest positive results when you increase annual legal immigration. And also when you increase the share of skilled immigrants. When you have more people coming, again, they’re working. Immigrants are highly attached to the labor force. And so they’re going to be adding to our savings, which increases the amount of investment and then GDP and growth in the long run.