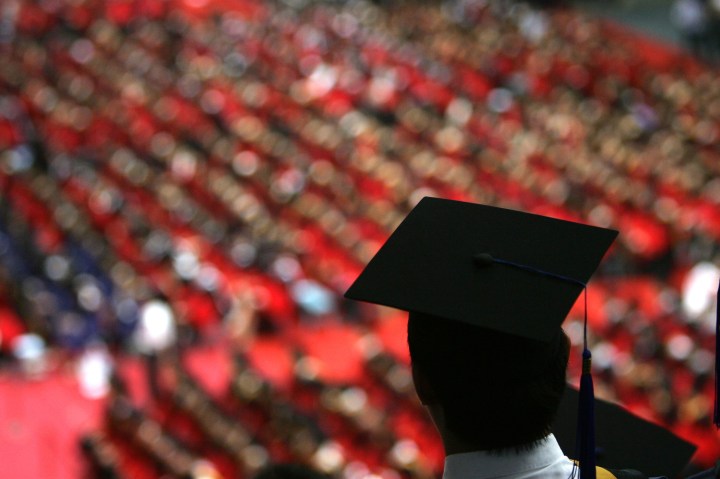 Finding the right college, and figuring out how to pay for it, is a daunting task with lots of unknowns and moving pieces.

And it’s grown increasingly tricky for middle-class families who fall into the so-called “doughnut hole” of financial aid. That’s when you earn too much money to qualify for significant need-based aid through the Free Application for Federal Student Aid (FAFSA) but too little to pay the full price out of pocket.

Lara Mordenti Perrault, of Bel Air, Maryland, and her husband did the math. They have four kids and could afford about $100,000 for each of them for college, about $25,000 a year, roughly what it costs for their state schools. Adjust that for tuition prices that increase by the year, and the family estimates it will cost about $500,000 to put all four kids through school.

“We make too much money to qualify for need-based aid, and we don’t make enough money to pay full tuition,” she said in an interview with “Marketplace Morning Report” host David Brancaccio and Ron Lieber, author of the “Your Money” column in The New York Times and new book “The Price You Pay for College.”

When they filled out the FAFSA for their oldest daughter, the government set their yearly “Expected Family Contribution” for her education at 40% of their take-home pay — never mind that they had three more children to put through college, too.

“That was completely undoable, obviously, right? We can’t afford to spend 40% of our take-home pay to send one child to school,” Mordenti Perrault said.

And so, instead of applying to the Ivy League colleges where many said Mordenti Perrault’s daughter’s had a chance of gaining admission, they embarked on a long journey to secure merit aid at the colleges and universities that dole out hefty scholarships to top performers.

Mordenti Perrault connected with other parents who had been through the process on Facebook. Someone shared a list of institutions that grant full-ride scholarships. Of course, those can be as or more competitive than Ivy League schools — generally 1% to 2% of applicants get those full rides — so they cast a wide net. Mordenti Perrault and her daughter dug up more schools by using keyword searches like “full tuition scholarship” and “university fellow” programs.

In the end, her daughter applied to over 30 schools and wrote more than 90 essays in pursuit of a full-tuition merit scholarship — this during her senior year of high school while she tried to keep her grades up and participate in sports and extracurriculars.

Navigating the process started to take over Mordenti Perrault’s own life, too: researching programs, soliciting feedback, keeping track of deadlines.

“This really became kind of like my full-time job,” she said.

Her daughter ended up receiving merit-aid packages from dozens of schools, nine of which fit their budget. At that point, the decision came down to the details of the offers — and the subjective element of “fit.”

“You want to know exactly what the rules are where this incredibly generous award could be taken away from you — so maybe if your grade point average falls below a certain point,” he said. “Will they allow you to take a year off if you want to? Are you kept from studying abroad? Are you forced to study abroad?”

At the end of the process, Lieber said parents need to be prepared for students to expect to have a some latitude with the final decision once they’ve cleared the hurdle of financial feasibility, or, as he puts it, won “the extreme sport of merit-aid acquisition.”

“If they do, well, they’ve probably done their job and you ought to give them a fair amount of authority to make that decision with those within those guardrails,” he said — even if that means forgoing a full-ride scholarship in favor of a more modest, albeit under-budget, offer.