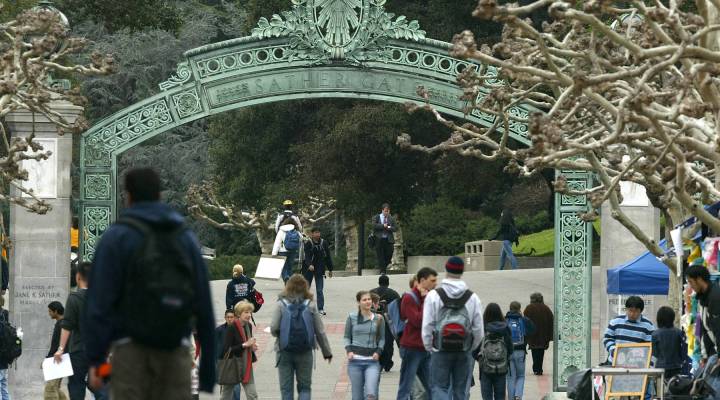 Sadia Kahn ended up at UC Berkeley because of a look her dad gave her. When she was in middle school she told him she wanted to go to Berkeley because she’d noticed adults perked up when they heard the word, but in this case it backfired.

“He had the saddest look in his eye,” Kahn recalls. “I think he felt guilty. He knew that was something we couldn’t afford.”

Attending a university in California can be a financial burden beyond the means of many college hopefuls. Rising tuition is compounded by the lack of affordable housing in the state and the high cost of living.

Kahn took her father’s concern as a challenge. So when a few years after her dad’s death, Kahn was accepted to UC Berkeley as a junior transfer student, it felt like fate.

Now she could not avoid the question of cost. Tuition often dominates discussions of affordability because it has more than tripled since 1992, according to the University of California and California State University budget offices.

But California is generous when it comes to covering tuition at its public schools.

Like more than half of the University of California students, Kahn would not have to pay tuition or student fees. UC guarantees those costs will be covered for families making less than $80,000 — and three out of four CSU students who get financial aid don’t pay any tuition, according to CSU.

Still, school did not seem affordable for Kahn. “Oh my God,” she said, “When I started looking into housing it was just kind of like, ‘OK, I’m definitely not going to school at this rate.’”

“What we don’t do a great job of is funding the total cost of attendance, which means the housing, the food, the transportation,” said Lupita Cortez Alcala, director of the California Student Aid Commission, the agency that runs the state’s financial aid programs.

In a little over a decade, the median rent in California has gone up 44 percent. Over the same period, the maximum financial aid award the state gives low-income students for non-tuition costs has gone up by only 8 percent, according to a recent report from the California Budget & Policy Center.

In terms of federal aid, Pell Grants for low-income students used to cover up to 80 percent of the average cost of going to an in-state public university. Now they cover no more than 30 percent, according to the Center on Budget and Policy Priorities.

Kahn moved into the cheapest place she could find, a room shared with two other women for $615 a month in a house a few blocks from campus. Giving up privacy was hard — even after a couple months she still changed in the bathroom.

But that was a small sacrifice compared to what else she’d left behind in San Bernardino. Her 3-year-old son Hashim was back home with his grandmother. Kahn didn’t have the money to go home to visit regularly so she video chatted him everyday.

“Hi baby! What are you doing?” she’d say, trying to pry his attention from his favorite show about a garbage truck and a backhoe. “Hashim, what are you watching?”

Sadia Kahn in the bedroom she shared with two other women near the UC Berkeley campus.

To make ends meet, Kahn took out her first loan a month into her first semester. She is trying to get additional financial aid and got on a waitlist for student parent housing. In the meantime, she took out a second loan. She signed up for food stamps, used the food pantry on campus and sometimes a friend would buy her lunch.  She was planning to get a part-time job, but was overwhelmed with her course load.

Surveys by UC and CSU have found more than 40 percent of students have trouble getting enough quality food to eat.

Kahn ended up dropping two classes — classes she needs for her political science major. “I was like, what the hell am I doing here?” she said. “Why am I going through all of this? I’m just getting into debt away from my family. I can’t even focus on school.”

Rose’s recent report on non-tuition costs recommends increasing funding for low-income students’ food and housing. “What these campuses really need, what the students need, is money.”

Still, the goal has never been to cover 100 percent of low-income students’ costs, Alcala said. “The idea really is to provide a true opportunity for low-income students, first generation students and underrepresented students to seek higher education.” she said.

But what a true opportunity looks like in California in 2018 isn’t always clear.

UC conducts its own survey of the full cost of attendance at its campuses every three years. It was last done in 2015-2016.

Alcala’s agency is in the process of conducting a statewide survey of non-tuition costs. The commission used to do this survey every three years, but hasn’t done one in a decade because of budget cuts during the recession. CSU relies on the Student Aid Commission’s data, but individual campuses are encouraged to make adjustments based on local markets.

Though the commission has upped its annual cost of attendance estimates with inflation, Alcala says they likely fall short. Alcala is hopeful she’ll have results in time to influence 2019-2020 estimates CSUs provide. She’s also hoping lawmakers pay attention. “The survey will show the results of the need,” Alcala said. “What are we going to do about it?”

Part of the problem is that rising tuition means the state spends more and more financial aid money on those costs, said Debbie Cochrane, vice president of the Institute for College Access and Success. “The cost pressures that creates makes it much harder for the legislature to increase and fund a larger award for non-tuition costs.”

“One of the things we’re doing is we’re building student housing like crazy,” said UC President Janet Napolitano. “We’re going to be adding 19,000 beds by 2020. Those will all be below market rate beds,” she said. Officials say UC is ahead of schedule when it comes to this housing initiative.

The Student Aid Commission has put forward recommendations for financial aid reforms based on a report from The Century Foundation. Among the top suggestions is a move away from a tuition-centric model of aid to one that takes into account the full cost of college attendance.

“These are solvable problems. We know the path forward,” Cochrane said. “It’s just a matter of garnering the political will to make it happen.”

Four months into her first semester things changed for Kahn. An apartment opened up in UC Berkeley’s family student housing, and she was reunited with her son Hashim.

And her mom, Koussar, moved up from San Bernardino to help with childcare. She’s adjusting and says Hashim is thriving. “He’s very happy,” Koussar said. “Much better than [San Bernardino] because he missed his mom a lot. A lot.”

Kahn feels a huge sense of relief. “We’re able to go back to a lot of the things that we used to do,” Kahn said. “Like waking up and brushing our teeth together, making breakfast, going out to play.”

She has also been able to get extra financial aid from UC Berkeley reserved for student parents. It doesn’t cover all her expenses, so she’s planning to get a part-time job and hoping someday this all pays off.

“I’m just trying to survive right now,” she said. “I definitely hope it’s worth it.”