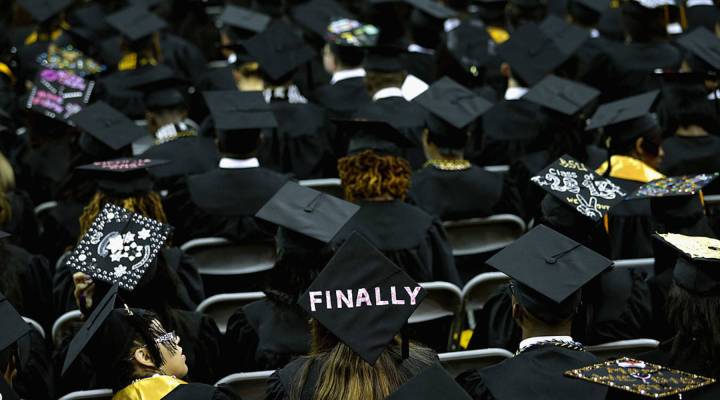 COPY
Graduates of Bowie State University put messages on their mortarboard hats during the school's graduation ceremony at the Comcast Center on the campus of the University of Maryland May 17, 2013 in College Park, Maryland.  Chip Somodevilla/Getty Images

Graduates of Bowie State University put messages on their mortarboard hats during the school's graduation ceremony at the Comcast Center on the campus of the University of Maryland May 17, 2013 in College Park, Maryland.  Chip Somodevilla/Getty Images
Listen Now

In 1987, William Bennett wrote a piece in the New York Times with the headline “Our Greedy Colleges.” Bennett was the U.S. Secretary of Education at the time, and he argued that increases in federal financial aid had allowed colleges “blithely to raise their tuitions, confident that Federal loan subsidies would help cushion the increase.”

Bennett has stood by his theory, and since then, the average sticker price at private colleges has more than doubled, adjusted for inflation. The U.S. government spends more than $150 billion a year helping students pay for college, in the form of grants, loans and work-study funds.

But what became known as the “Bennett Hypothesis” has been hard to prove. Cuts to state funding, rising healthcare costs for faculty and staff, administrative bloat and the “arms race” for fancier science buildings and aquatic centers have all been blamed for rising prices.

“There are so many other factors happening in the higher education industry,” said Taylor Nadauld, an associate professor of finance at Brigham Young University. “The argument would be it’s just so hard to pin pricing increases on federal aid.”

A few years ago Nadauld and staffers at the Federal Reserve Bank of New York set out to try. They studied what happened when, in 2006, Congress significantly increased the maximum subsidized loan a student could take out for college. Suddenly, freshmen and sophomores could borrow about $1,000 more per year.

“So you have you have this shock, essentially, to the amount that students can borrow,” Nadauld said.

The researchers figured that colleges with a lot of students who borrowed the maximum loan amount would be most affected by the policy change. Sure enough, Nadauld said, those colleges had the biggest jumps in tuition.

After controlling for every other factor that might have influenced tuition, “we estimate for every additional dollar of subsidized loans made available to students, institutions increased their sticker tuition about 60 cents,” he said.

The results, published in a recently revised paper, were most pronounced at expensive for-profit and private nonprofit colleges — schools similar to Goucher College in Towson, Maryland, where the current sticker price, including tuition and required fees, is $43,440.

That’s where I found 19-year-old Dawnya Johnson, a sophomore from Baltimore, eating oatmeal at a campus coffee shop. She’ll owe around $30,000 in federal loans by the time she graduates, about the national average.

“I actually think there should be a cap on how much a college receiving federal funding can raise their tuition,” she said. “They are like, ‘well the government will subsidize it so we can raise our tuition to whatever we want it to be,’ but it still puts a huge burden on students.”

Dawnya Johnson, a sophomore at Goucher College in Towson, Md., expects to owe about $30,000 in student loans when she graduates.

Johnson is on her own paying for college, so she thinks a lot about what she’ll owe. Junior Sarah Pacheco, from Santa Barbara, CA, has help from her parents, though she’ll be responsible for most of the debt.

Asked how much debt she had taken on so far, she wasn’t sure.

“I know I’ve borrowed a significant amount,” she said. “It just seems far off, and I really don’t focus on it until it’s time to reapply for financial aid.”

Experts say that lack of awareness is part of the problem. Grants and loans that don’t have to be paid back right away have a way of insulating students from the real price. For years, colleges mostly had to compete on quality, said José Antonio Bowen, president of Goucher College.

“There probably was some inflation of prices because we could,” he said. “Everybody was raising prices. Let’s raise prices along with everybody else.”

José Antonio Bowen is president of Goucher College in Towson, Md., which announced a tuition freeze for next year.

But that’s changed, Bowen said, since the recession. Goucher has decided to freeze tuition next year.

“There’s more price sensitivity from consumers, so colleges are having to look at whether or not more people can pay, will they pay,” he said. “Our pricing has started to be more important.”

Critics of the New York Fed paper say the study only looked at a short period of time, and only at sticker price. Colleges discount that price heavily for many students with their own grants and scholarships.

Economist Sandy Baum, a senior fellow at the Urban Institute, has studied college pricing for years. Even if there is some truth to the Bennett Hypothesis, she said, “in some sense the whole purpose of the federal student aid programs is to increase demand.” So if there is some upward pressure on sticker prices, she said, “that’s actually a small price to pay for the goal of making it possible for so many more people to go to college.”

“If we did not have any federal student aid, then there are lots of low and moderate income students who would not go to college,” she said. “No question about it. They would not be able to pay.”