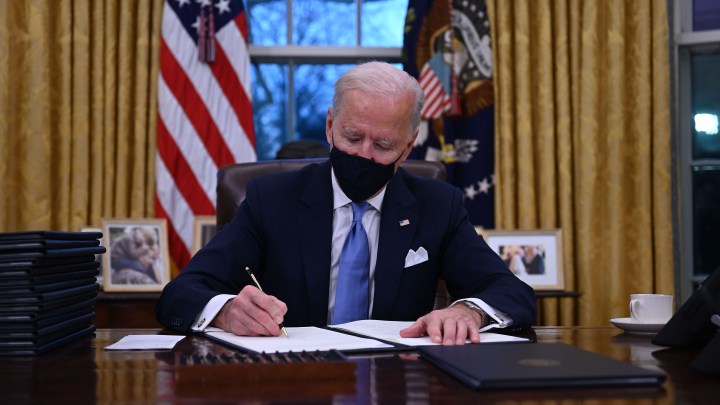 COPY
President Joe Biden sits in the Oval Office as he signs a series of orders at the White House in Washington after being sworn in at the U.S. Capitol on Jan. 20, 2021. Jim Watson/AFP via Getty Images

President Joe Biden sits in the Oval Office as he signs a series of orders at the White House in Washington after being sworn in at the U.S. Capitol on Jan. 20, 2021. Jim Watson/AFP via Getty Images
Listen Now

The Biden administration has advanced two pieces of legislation so far. Economic relief is one, the other deals with revamping immigration. That’s a sign that taking on the country’s immigration system is a top priority.

The bill includes protections for immigrant workers and expanded access to visas for foreign workers and their families.

The U.S. immigration system is complicated. To get permission to work here, an immigrant usually needs an employer sponsor. There are visa quotas by country and skill set. Under the Trump administration, qualifying got harder and application backlogs grew.

The bill would also make life easier for spouses of immigrants with work visas.

“It doesn’t make sense to make them sit idle,” Shafiqullah said. “If they’re able to work, able to contribute to the economy, get them work permits, get them social security numbers.”

The Biden plan would make it easier for foreign grad students in STEM fields to stay and work after finishing their degrees, and it would protect more undocumented immigrant workers who report employer abuse, wage theft or unsafe working conditions, said Laura Huizar at the National Employment Law Project.

“Some protection from deportation as well for workers who speak up in the workplace and then are victims of workplace retaliation,” Huizar said.

The bill would also create a path to citizenship for undocumented workers. Mike Gempler of the Washington Growers League said farmers and food processors will welcome that, and won’t likely oppose its increased worker protections.

“In general, if employers are making a good-faith effort to follow the law, they really won’t have much to worry about,” Gempler said.

“Organizations that are well-funded lobbyists and would tend to have some support, especially groups like the Chamber of Commerce, among the Republican Party,” Dominguez said.

Some Republican senators joined Democrats to support the last comprehensive immigration reform bill in 2013. Republicans in the House blocked it.