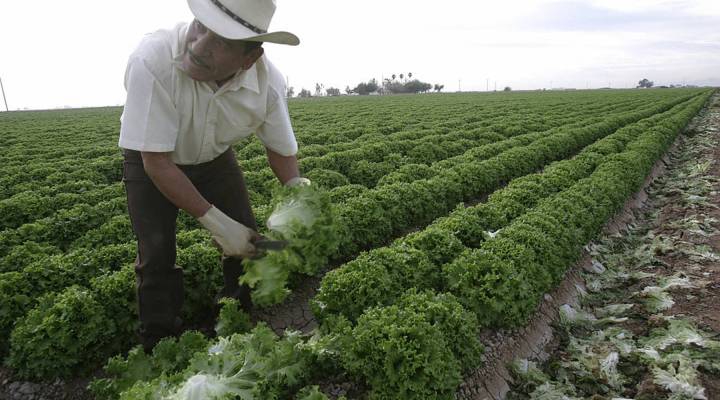 COPY
A farm worker harvests lettuce in a farm field near have the border town of Calexico, California. HECTOR MATA/AFP/Getty Images

A farm worker harvests lettuce in a farm field near have the border town of Calexico, California. HECTOR MATA/AFP/Getty Images
Listen Now

FAISON, N.C. — Blanca Benitez Alvarran, 22, exits an old school bus parked outside a convenience store. She and some 50 other immigrant farm laborers rush to get in line to cash their paychecks.

“It’s six month of work here. First, I planted sweet potatoes and then after that, tobacco,” she said in Spanish. Workers with H-2A visas like Alvarran can stay in the U.S. for up to 10 months in one stretch. She paid a labor recruiter in the state of Guerro, Mexico, where she’s from, to prepare all the visa paperwork. Then, she said, she was on her own.

“It’s not like everyone tells you, that all you have to do is arrive here and you make money,” she said. “You have to look for work.”

And a H2-A worker’s legal status in the country depends on employment. Even once an H-2A worker gets a job, she can be deported if she loses it. Workers have few protections, but are at least supposed to be paid a minimum wage ranging between $11 and $14 per hour, depending on the state. On top of paying wages, employers are also on the hook for a number of fees.

“We have to pay $950 per employee for all the paperwork, permits, visas and everything else that goes along with it,” said Jimmy Burch, owner of one of the largest vegetable farms in North Carolina. Burch is also responsible for providing housing and transportation for his H-2A employees. It’s a big expense. H-2A visa holders make up three-quarters of his workforce of about 200 people.

Last fiscal year, the government granted 240,000 H-2A visas, a 21% increase from the year before. And now some farmers who aren’t eligible to hire foreign seasonal workers want in on the action. Dairy producers need labor year-round. So do mushroom farmers.

“It would be a dream for us to have the word ‘seasonal’ struck out of the visa language so that we would have year-long visas,” said Rachel Roberts, executive director of the American Mushroom Institute.

“It really doesn’t make any sense to bring in people for year-round, permanent jobs in a temporary status,” argues Daniel Costa, Director of Immigration Law and Policy Research, Economic Policy Institute. He says it’s not unheard of for farmers to bring in the same immigrant workers for 20 years or more, but they’re perpetually only visitors.

“How about we give them permanent status so that the worker, themselves, can choose” whether to say in the U.S. or return home, he said.

Alvarran said she considers the U.S. home when she’s here working, but would she stay if she could?

“Permanently? Well, if it was a possibility, yes,” she said. In the meantime, she says she’ll continue to work here for six months out of the year and send money to her grandmother to hold in Mexico, so that maybe she can build a better life back home.