COPY
A woman picks crabs at the W.T. Ruark Seafood Co., on May 17, 2018 in Hoopers Island, Maryland. Mark Wilson/Getty Images

On Maryland’s eastern shore, crab season is less than two weeks away. Aubrey Vincent, who runs the crab wholesaler Lindy’s Seafood with her dad, is getting ready. Lindy’s sells to markets, restaurants, and has its own brand, Mary Ellen Crab Meat.

Vincent hires H-2B workers from Mexico and Central America to crack open freshly steamed crabs, extract the meat and deliver the product. “Without this H-2B program and the seasonal workers that come, year after year, our plants would be out of business,” she said. “We just don’t have the people here to do the jobs.” Her full staff of mostly H-2B visa holders will start work on April 1.

Things were different for Lindy’s last year. Vincent applied for 100 temporary work visas and didn’t get any. The way the H-2B process works, employers either get all the visas they’re looking for, or they get none. “We weren’t sure what we were going to do because it essentially eliminated about 40 to 50 percent of our business,” Vincent said.

Then, in the middle of the crab season, the government released an additional 15,000 H-2Bs. The application by Lindy’s for 70 temporary visas was granted which, Vincent said, secured just enough workers to stave off disaster.

A scale used to weigh crab meat sits dormant in the empty crab picking room at the Russell Hall Seafood Co., on May 17, 2018 in Fishing Creek, Maryland.

According to Bill Sieling, executive director of the Chesapeake Bay Seafood Industries Association, if you’re in the crab business, or any business that relies on these temporary workers, you never know how the whole H-2B thing is going to go. “Every year you’re totally in the dark as to whether you’re going to be in business that year or not,” he said.

Sieling said the limit on H-2B visas made it tough for crab plants to line up contracts, year after year. “If you’re running a big organization, a supermarket chain or something, and you want to have crab meat consistently, you’re going to go to a company that you know is always going to be able to meet your needs and not say, ‘Well, I’m sorry, this year I don’t have any workers, but call me again next year and I’ll probably have workers again.’”

Sieling wants the H-2B visa cap to be removed altogether. For now, though, the only thing in the works is the Department of Labor’s plan to switch to a lottery system, which administrators say will be “fairer and more orderly.” To some employers, though, a lottery hardly seems fair. Boston immigration attorney Peter Cramer said that all random selection does is avoid another Department of Labor website meltdown.

“It keeps the computers up, but it doesn’t help the employers because they’re still going to have that one-in-three chance of actually getting the visa,” he said. Cramer would also like to see more H-2B workers in the country, but groups opposed to expanding legal immigration feel the opposite.

The crab picking room at the Russell Hall Seafood Co., sits empty on May 17, 2018 in Fishing Creek, Maryland.

Daniel Costa, director of immigration law and policy research at the Economic Policy Institute, opposes expansion for another reason. He says H-2B workers don’t get a fair shake. “It’s a captive worker program,” he said. “They have a visa that is owned and controlled by an employer. They can’t switch jobs easily. If they get fired, they become instantly deportable.”

Costa says H-2B workers should be able to get a green card or apply for citizenship. He also thinks that employer claims of worker shortages are overblown and demand more oversight and inspection by the Department of Labor.

Aubrey Vincent at Lindy’s Seafood says she would hire American workers, exclusively, but there aren’t enough in her area who are willing to accept seasonal work. Vincent managed to get all 105 visas she applied for this year, but there’s no guarantee for the crab season after this one. “The pie is only so big,” she said. “There’s still more demand than there are visas.”

The federal government received about 100,000 H-2B visa applications in January and awarded 33,000 work visas that start on April 1st. It’ll hand out another 33,000 to visa winners this summer. 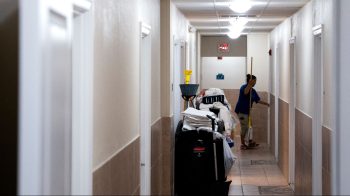 The U.S. is nearly doubling the number of seasonal worker H-2B visas it offers