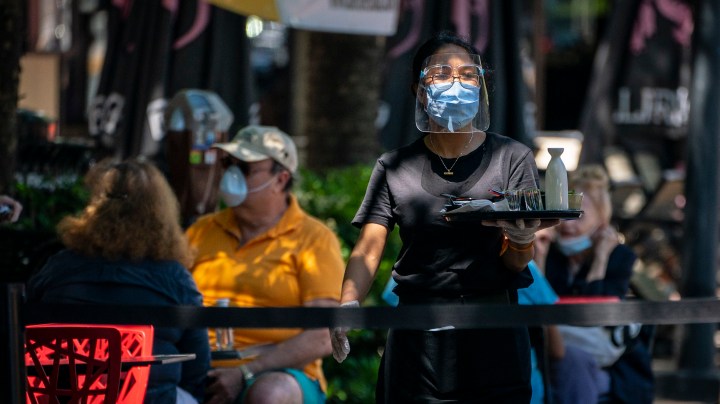 COPY
The hospitality sector, from dining to amusement parks, is a key draw for seasonal workers. Sarah Silbiger/Getty Images

The hospitality sector, from dining to amusement parks, is a key draw for seasonal workers. Sarah Silbiger/Getty Images
Listen Now

This Memorial Day kicks off what the tourism industry hopes will be a recovery summer as the economy reopens and more people take vacations. But businesses that rely on seasonal workers say they’re understaffed. Now the federal government is allowing them to apply for more H-2B visas for foreign guest workers. But aren’t there a lot of unemployed Americans they could hire?

Amusements of America usually hires about 80 people to run scream-inducing rides at its movable country fair. About half the hires are foreign guest workers.

“They are the ride operators. They are the mechanics,” said Dominic Vivona, whose family owns the company. He said this year he didn’t get any of the H-2B visas he asked for.

Starting Tuesday, employers can apply for 22,000 additional H-2B visas. So Vivona is applying. He said it’s hard to find Americans for these jobs.

“You’re living onsite in RVs, and that’s not everybody’s lifestyle,” he said. Plus, Vivona said, his jobs end when he closes in November.

Daniel Costa at the Economic Policy Institute said employers should try harder to hire Americans. The unemployment rate in the hospitality business is still at almost 14%.

“At the national level, at least, there are not signs of labor shortages in these occupations,” Costa said.

Costa wants to beef up existing requirements that employers search for American workers before applying for guest worker visas. But Jon Baselice of the U.S. Chamber of Commerce said this is no time to tighten the rules.

“There’s a lot of businesses who are telling me, like, our survival depends upon our ability to meet our workforce needs.”

Baselice said these seasonal businesses won’t survive another summer like last year, when they barely scraped by.