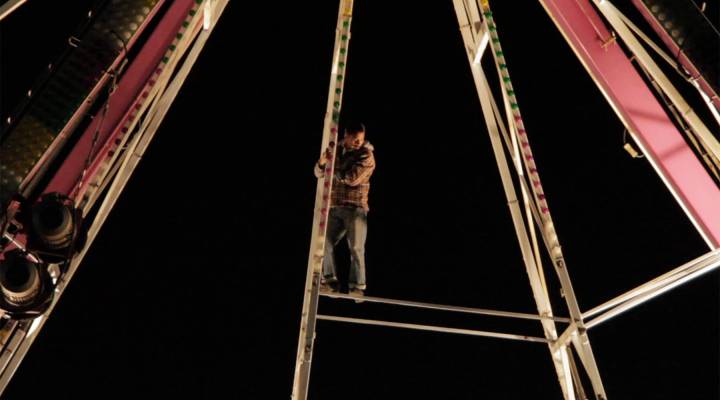 What comes to mind when you think of carnivals? Hot summer days? Sticky treats? Stomach-curdling rides? How about H-2B visas?

That’s what producer-director Jamie Sisley thinks about, along with the nostalgia.

“I remember the carnival pretty vividly as a boy,” Sisley said. “And it was also really interesting to me to think that the vast majority of these, you know, “carnies” are actually, you know, legal Mexican migrant workers who were coming up and working all the fairs around the country. We thought it would be interesting to cover the difficulties of coming in legally,” Sisley said of his documentary “Farewell Ferris Wheel,” which he made with filmmaker Miguel Martinez. It airs Oct. 10 as part of the World Channel’s America ReFramed series.

Like a lot of industries, Sisley said the carnival business is “significantly smaller” than it used to be, with two big carnivals on each coast and a lot of smaller mom-and-pop fairs. “Farewell Ferris Wheel” looks at how the traveling amusement parks stay alive with the help of H-2B visas and the migrant Mexican workers they provide.

Those visas, issued by the federal government, temporarily allow low-skilled foreign workers to come to the U.S. and work for seasonal businesses, like amusement parks, hotels and souvenir shops. Seasonal businesses depend heavily on H-2B workers, and when the number of visas dropped last year, they scrambled to find staff, leading some businesses to suffer.

Marketplace Weekend host Lizzie O’Leary spoke to Sisley about “Farewell Ferris Wheel,” the people behind the H-2B visa process and the workers and who survive on them. An edited transcript of their conversation follows.

Lizzie O’Leary: You and your co-filmmaker followed this group of Mexican migrant workers and focused on the H-2B visa. Can you tell me a little bit about the program and how these guys get their work authorization?

Jamie Sisley: [Employers] have to start with a demonstrated need. And that’s pretty laborious. I mean, you have to publish newspaper articles, physical newspaper articles still, you have to prove that nobody was able to sort of take those positions. And then once there’s that demonstrated need on the workers side, you have to actually get a visa, and then those visas are pretty difficult to get because they’re very competitive. Every year, the cap for the visas fluctuates. It’s 66,000 typically. There’s a lot to it.

Lizzie O’Leary: One of the most fascinating parts of this film is that it focuses on one guy who is kind of the link between workers and the carnivals who need labor. This guy Jim Judkins. I want to play a clip from him and talk about him a little bit. Let’s play it.

Jim Judkins: I’m the person that processes 81 percent of all the H-2B visas for the outdoor entertainment industry in the country. I didn’t realize that I handle such a large percentage.

O’Leary: 81 percent is a staggering amount. How many people does that mean? You know, who Jim is bringing into this country to do this work?

Sisley: Well again, it fluctuates, but typically in the carnival industry it’s anywhere between three to five thousand people a year that come up on these visas, and that sort of percentage we found was sort of typical for a lot of these industries. Generally, it’s really organic. It starts, you know, a recruiter will maybe they’ll work for a carnival or a circus or another industry, and they’ll find somebody that they they’re close to, they come up for the visa, and then their brother or their uncle or their sister, you know, is used as a referral, and it just sort of trickles down from there. And that’s what happened in Jim’s case. Jim used to work at a circus for many, many years, and a lot of the people he worked with there just ended up referring their friends and people in the community, and they all came from the same town, Tlapacoyan.

O’Leary: There’s a really interesting moment toward the end of this film where there’s like a banquet and celebration for these workers, and someone refers to them as the Jim Judkins workforce family. And it’s kind of a weird moment, because it gets at this duality of, you know, he is facilitating their entry into the U.S. But is he a fair broker? Who does he work for, et cetera?  There is a quote from one of the workers who says, “You know, we don’t necessarily like him, but we need him.” What is his business, and how do people like Jim Judkins for the carnival industry or other industries, like, how do they function?

Sisley: Well, I think it starts in terms of Jim, it starts with a really, really deep love of the circus and carnival. Jim doesn’t have, you know, a wife and kids. The carnival is his life. And I think that if you hear it from his point of view, he’s sort of taken it upon himself to sort of help save the carnival industry, because, you know, in his eyes and a lot of the employers’ eyes, if it wasn’t for these workers, the carnival just wouldn’t be able to sort of subsist. On the other hand, people look at the H-2B as a way to sort of artificially keep costs down. And they look at people like Jim and other recruiters, as, you know, someone who sort of helps promulgate that. And so it really does depend on your point of view.

O’Leary: You followed this group of workers coming up for seasonal work. What has their experience been like, you know, during the time that you followed them?

Sisley: It’s been a really interesting following the workers, and generally speaking, the workers are very happy to come up. And you have to understand that, you know, we follow the workers starting in their hometowns in Tlapacoyan, which is about 14 hours south of the U.S. border. You know, we followed them to the orange fields, into the coffee fields, where, you know, they were paid anywhere between $3 to $10 a day for pretty backbreaking work. And so for them to come up here to the U.S. and make $350 a week and that’s the start. And you know, if they stay longer, if they come, they’re returning each year. A lot of them get bonuses. And so they get paid more than that. You know, that’s a lot more money than what they’re getting paid. And if you look at the kind of work they’re doing, you know, a lot of Americans would sort of shake their heads and say, “You know, I would never want to take down rides or travel around the country or live in these bunk houses.” But to these workers, the work is comparable if not maybe a little bit easier than trying to, you know, pick oranges and take them down mountains.

O’Leary: A couple of years ago, the Labor Department put in some protections for folks who are working on an H-2B visa. What did they do?

Sisley: Well, I mean the short answer to that is not much to nothing, because there’s no enforcement. That’s the real problem. There have been a lot of discussion about adding a lot of, you know, a lot of protections for workers over the years. But at the end of the day, if you look at actual cases that have occurred as a result of those, there’s almost nothing there. The real problem is there’s just not any financing in place to help these departments that are supposed to oversee the regulations. And someone really needs to, you know, look into that and try to address it.

O’Leary: You know, ultimately Congress did increase the number of H-2B visas allowed each year, you know, as we talked about at the beginning, but when you look at the carnival industry, is that going to be enough to keep them afloat?

Sisley: You know, my opinion on that is that it would and it’s also important here to sort of note, we didn’t find any carnival owners that were, you know, rich. They’re all usually three-, four-generation-deep organizations that are having a lot of trouble staying afloat. That’s a fact. And again, we have a lot of respect for that industry. But I do think they would still survive if they didn’t have these visas in place.