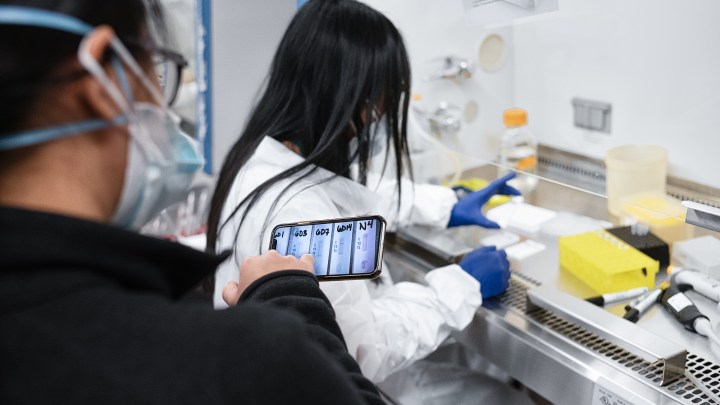 COPY
Scientists work on a rapid COVID-19 antibody test in a lab in New York in April. New H1-B rules could affect U.S. labs that are short on scientists. Misha Friedman/Getty Images

Scientists work on a rapid COVID-19 antibody test in a lab in New York in April. New H1-B rules could affect U.S. labs that are short on scientists. Misha Friedman/Getty Images
Listen Now

A group of U.S. businesses, trade groups and universities has filed suit to stop the Trump administration’s overhaul of the H-1B visa program for international guest workers.

Two new rules would limit the number of foreign workers allowed under the program and require U.S. companies to pay them higher salaries.

One of the new rules from the Labor Department would require U.S. companies to pay foreign workers on H-1B visas 35% to 200% more, according to the complaint.

“The cost to employers will be $198 billion over 10 years,” said Linda Kelly, general counsel for the National Association of Manufacturers, one of the trade groups behind the lawsuit.

Another rule limits the jobs that H-1B workers can fill. Kelly says all kinds of businesses would be affected — including those employing researchers, chemists and doctors. Like ARUP Laboratories, in Salt Lake City, which, among other things, does coronavirus testing. It now has about 100 H-1B medical lab scientists.

Misty Smith, who heads talent acquisition there, said U.S. schools just aren’t producing enough scientists. “I could literally hire all the graduates each year and it probably still wouldn’t meet our needs,” she said.

Some U.S. companies have turned to outsourcing firms. They sponsor workers on H-1B visas, then subcontract them to U.S. firms. The Labor Department wouldn’t do an interview, but did send “Marketplace” a statement saying the rule is intended to stop abuses.

Britta Glennon, assistant professor of management at University of Pennsylvania’s Wharton School, said there are abuses. Some of those subcontractors pay substantially less than what American workers make.

But Glennon said U.S. companies only turn to the subcontractors because there’s a cap on how many H-1B visas employers can get. Ultimately, she said, U.S. companies just open foreign affiliates and hire as many guest workers as they want.