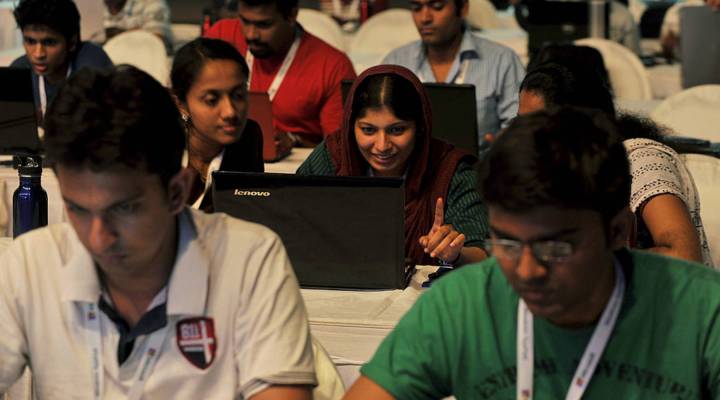 COPY
Indian participants take part in the 'Windows AppFest', a marathon coding for 18 hours by more than 3500 software developers organised by Microsoft in Bangalore on September 21, 2012. 90% of Indian technology workers employed in the United States use H1B visas. Manjunath Kiran/AFP/GettyImages

Indian participants take part in the 'Windows AppFest', a marathon coding for 18 hours by more than 3500 software developers organised by Microsoft in Bangalore on September 21, 2012. 90% of Indian technology workers employed in the United States use H1B visas. Manjunath Kiran/AFP/GettyImages
Listen Now

President Donald Trump has made it clear that jobs and immigration are at the top of his agenda — and on its face, the question of H-1B visas would seem to hit on both topics.

Reports Monday suggested the president was poised to sign an executive order that could affect the program, which lets highly skilled workers come to the U.S. on three-year work visas.

The majority of H-1B visas go to tech workers, and big tech companies like Facebook and Google have being arguing for years that the U.S. should increase the number of H-1B visas it gives out each year.

Currently, they’re capped at 85,000 total visas — 65,000 three-year visas for specialty workers with a bachelor’s degree or equivalent, and an additional 20,000 for foreign students trying to get post-graduate degrees.

When it’s working right, you get people like Anshum Gupta. He lives in the San Francisco Bay Area, and he came to the U.S. from Bangalore, India, on an H-1B visa a little over three years ago.

Gupta is a software engineer with a very special set of skills. By his estimate, he’s one of only about a hundred people in the world who can do the work he does.

“I work on a specific project and the company was looking to hire people from wherever they could find, because there weren’t too many people who specialize in that kind of work,” he said. “They reached out to me when I was in Bangalore. It took about 10 to 11 months for me to decide, apply, and then be selected through the lottery and for me to get my visa and move to the U.S.”

Gupta said he’s paid on par with other workers in his field, and considerably more than generic software workers. In fact, IBM sponsored him for a second visa so he could come work for them. Now, he’s applying for a green card, so he can stay in the U.S. and keep doing what he does for American tech companies who need his skills.

But Gupta’s case isn’t necessarily common. The H-1B program has been controversial, and attempts to reform it date back to at least 2007.

“Having skilled immigration to the U.S. is undeniably a good thing,” said Daniel Costa, director of immigration law and policy research at Economic Policy Institute, a think tank based in Washington, D.C. “But the H-1B program in particular is: one, not actually immigration, and two, is structured in a way that it’s a very useful tool for corporate exploitation.”

Costa said the visas are great for companies who want to pay lower wages or outsource information technology functions — indeed, the majority of the visas do end up going to outsourcing companies, many based in India, that flood the H-1B visa lottery system with requests.

“In many cases it’s been terrible for U.S. workers,” Costa said. “They can be replaced, and/or it denies them a shot at getting decent-paying tech jobs in their own communities.”

And Costa and others argue that the program can be bad for the temporary workers themselves, who end up being paid lower wages and are effectively trapped in their three-year jobs unless another company is willing to sponsor them for a new visa.

Nevertheless, tech companies like Google and Facebook have argued for more high-skilled work visas, along with reforms that could fix the system so it can’t be abused by companies who are looking to hire cheap, foreign labor.

Two senators, Republican Chuck Grassley from Iowa and Democrat Dick Durbin from Illinois, have been trying to reform the program since 2007. They were poised this month to reintroduce legislation that would crack down on inappropriate uses of H-1B visas and prioritize visas for “best and brightest” foreign students, advanced degree holders, those with specific and valuable skills, and those being paid high or at least comparable wages.

It’s unclear whether the two will move forward with proposed legislation, or even what President Trump could accomplish with an executive order that doesn’t include congressional action.

But the tech industry is unquestionably worried about a crackdown on foreign talent, especially in highly competitive fields like software engineering.

“From an empirical perspective, there is a dramatic under-supply of software talent in the U.S.,” said Chris Hyams, the president of Indeed.com, a site that matches job seekers with companies that are hiring. “Where we see it in our data is in how hard it is to fill positions. Tech positions open longer than any other type of position … and of the top 10 most contacted resumes, eight out of those 10 are software developers.”

Hyams said there are 1.4 million listings for software engineers on Indeed.com, and they’re not all from traditional tech companies.

“Wells Fargo and GE have more open positions than Google or Facebook,” he said.

According to the Bureau of Labor Statistics, there will be a million new jobs in computer science by 2024, Hyams said. And the National Science Foundation said the U.S. will produce less than half that many computer science graduates.

“Those positions, when they can’t get filled, either they remain unfilled and work doesn’t get done, which has a negative impact and a drag on the economy,” Hyams said, “or in some cases, many companies will just turn to opening offices outside of the U.S. or hiring workers outside of the U.S.”

And software engineer Gupta echoes the concerns of the big tech companies, who say the goal — at least for them — isn’t to supplant American workers. It’s to find the best person for the job.

“For me, that’s a good thing to do,” he said. “It’s not that someone from outside U.S. is gaining at cost of someone who’s an American. There are companies that need to expand and get more engineers, and hire at a faster pace. And so I think it kind of makes it obvious to reach out to countries that have these resources.”