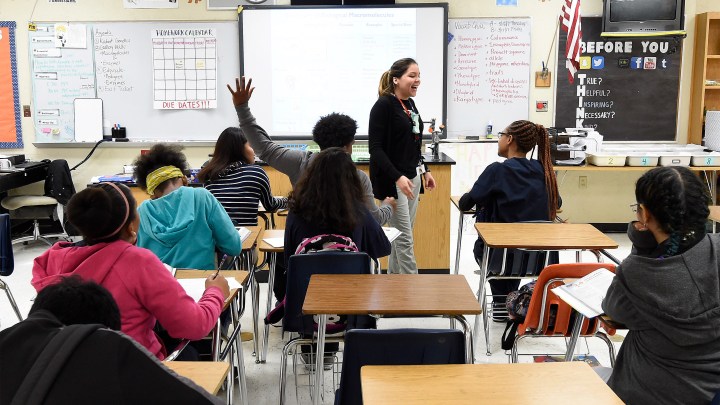 COPY
A science teacher works with students in a high school in Homestead, Florida, in 2017. Rhona Wise/AFP/Getty Images

A science teacher works with students in a high school in Homestead, Florida, in 2017. Rhona Wise/AFP/Getty Images
Listen Now

On a recent weekday morning, sophomores at Austin High School huddled around laptops modeling various scenarios, like how vaccination rates affect the transmission of an infectious disease.

Anthony Petrosino, an education professor at the University of Texas at Austin, is in charge of the National Science Foundation grant that’s paying for these students to learn computer software that teaches them about epidemics.

“It basically allows students to program and to use the computer to create things,” Petrosino said. “They become active participants and creators and designers.”

Getting students engaged in science, technology, engineering and math fields is important to U.S. employers, in part because U.S. schools aren’t churning out enough graduates who can work in critical, high-skill jobs. One recent report by Deloitte predicts that the United States will need to fill 3.5 million jobs in the manufacturing sector alone by 2025, but that as many as 2 million of those will remain open.

Maya Denton is doing her part to get more students interested in science and tech. She’s a graduate student in STEM education at UT Austin. Her federally funded research focuses on preparing K-12 teachers to improve math and science education by broadening the definition of STEM.

“All of the science and engineering and math involved in things like sewing or crafting or things like that,” Denton said. “All of the things that may not get counted as it, but actually involve a lot of the principles in STEM.”

Sarah Eichhorn’s federally funded work at UT Austin is focused on getting more minority students enrolled in college STEM programs. Under her new initiative, 25 low-income sophomores will get $5,000 each to do math and science research.

“Wealthier students have the opportunity to volunteer and do research, whereas low-income students have to work and don’t often have the chance to do extensive undergraduate research,” Eichhorn said.

Many employers bring in foreign workers by going through the complicated and expensive process of obtaining H-1B visas for them. And all three of the STEM initiatives at UT Austin reap the benefits of that conundrum: Each program is funded by H-1B fees.

That means the employers who hire foreign workers on H-1Bs to perform STEM jobs are basically paying for the programs that would render those workers redundant.

Stuart Anderson, director of the National Foundation for American Policy, helped produce a report on where H-1B visa fees go.

“One of the best kept secrets in immigration policy is that every time a company uses an H-1B visa to hire a foreign national, a good chunk of money goes to fund training and scholarships for Americans,” Anderson said.

A typical employer pays about $5,000 to apply for a worker under the H-1B visa program. Thirty percent of that goes to training and scholarships.
That’s more than $5 billion since H-1Bs hit the scene in 1998.

A lot of money, but immigration attorney Sandra Feist said the government is curiously silent about what these fees are doing.

“Politicians like to use H-1Bs as this rhetorical punching bag saying that they’re taking Americans’ jobs, but they, you know, they never talk about the fact that every time an H-1B is filed that money is directly funding training for American workers in those exact fields where we have so many H-1B workers,” Feist said.

Even many of the researchers and academics who are funded through H-1B fees are in the dark.

“I had no idea that this money was at all tied to visa fees,” said Eichhorn at UT Austin.

In its 2020 budget, the Trump administration suggested boosting H-1B fees.

That could discourage smaller employers from applying to hire foreign workers.

But the Department of Labor says the goal is to raise even more money for scholarships and to train Americans in STEM fields.